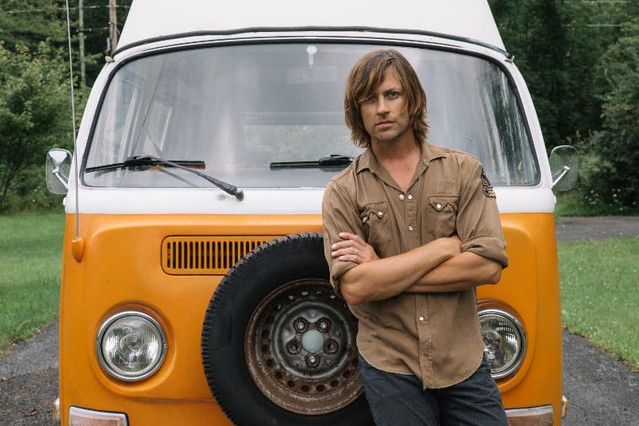 Summoning up all his rock star mojo, Rhett gyrated and swung windmills on his guitar in an entertaining show on Feb. 22. Although born in 1970 and father to a 15-year-old son, Rhett’s handsome, boyish good looks make him appear much younger. Looking charmingly disheveled, Rhett joked that he needed a haircut so badly he was having trouble seeing, as a wild shock of hair hung over his face.

Before he started playing, Rhett told the audience he’d spent three hours agonizing over his setlist. He tried to keep it short, but songs just kept creeping in. After playing his opening number, “Good with God,” an Old 97’s tune, he said, “A bunch of the songs on the setlist are what I classify as challenge songs,” meaning Old 97’s songs that should’ve been hits. He playfully quoted Elvis Costello, who once said, “They all sounded like hits to me.” Later, before playing “The Question,” Rhett said, “I think the people that have hit songs, it just fucks ’em up.”

Rhett, on the other hand, has clearly remained grounded, and he wasn’t afraid to share some foibles in stories between songs. Several years ago, for example, Rhett had Lasik surgery. Afterward, the surgeon told him he had to keep sweat out of his eyes. It was summer, and the Old 97’s were touring outdoor festivals, making sweat inevitable. Rhett wore a bandana all summer to keep the sweat out of his eyes. One day, the Old 97’s guitarist, Ken Bethea, told Rhett, “You don’t look good in a bandana.”

Rhett has an upcoming book of poetry for kids. He says that he will not, however, make children’s music. Rhett shared the delightfully twisted poem “Brotherly Love,” which implores a character not to murder their brother and instead show “a little brotherly love.” The book’s editors forced Rhett to remove “cyanide” and “poke his brain bone” from the poem.

“Songs come from a lot of weird places,” Rhett told the audience. “Kids’ poetry,” he said, “comes from a desire just to keep my kids liking me.” Rhett explained that he has also been working on “long-form fiction,” i.e. a novel, and that one of characters had inspired a song.

In addition to his work with the Old 97’s, Rhett has released eight solo albums. He released the first, 1989’s Mythologies, prior to the formation of the Old 97’s. Work with the band occupied his time during the ’90s, and Rhett didn’t release a solo album again until 2002. Rhett shared several songs from his latest solo record, last year’s The Messenger, including one he’d never played before live, as well as “Total Disaster,” “I Used To Write In Notebooks,” and “You Were A Stranger.”

Stream The Messenger by Rhett Miller on Spotify:

After closing his set with with the Old 97s’ “Longer Than You’ve Been Alive,” Rhett came back to the stage for an encore amidst thunderous applause. After playing more than 20 songs in his sett, Rhett continued to deliver in his encore, playing four numbers in his encore. He even entertained requests, thrilling the crowd with “Ray Charles,” “Caroline,” and “Jesus Loves You,” before closing out the evening with Tom Petty’s “American Girl.”

Next time Rhett Miller plays your town, mark your calendar to spend some time with this old soul with the youthful visage.