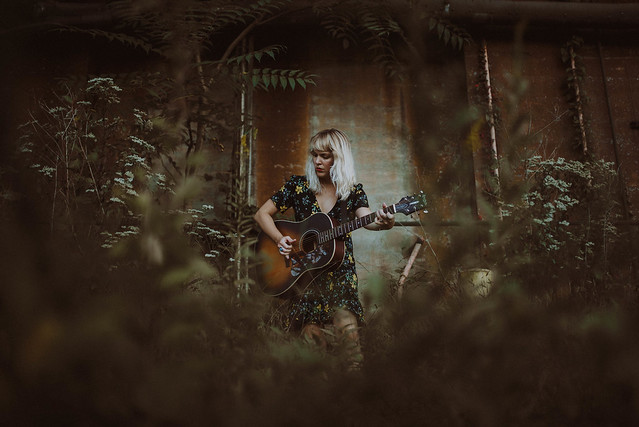 Local roots music artist Lauren Calve opened for Old 97’s frontman Rhett Miller recently at City Winery DC. Accompanied by John Figueroa on the electric guitar, Lauren strummed out tunes inspired by her life and historical sources on her acoustic guitar, beginning with “Polly.” Inspired by the negative portrayal of a woman in a traditional folk recording, Lauren wanted to present Polly’s side of the story.

Lauren asked if there were any were Midwesterners in the house, to which I enthusiastically hollered yes. It turns out that Lauren and I were both born and spent our earliest years in Kansas. “Be My Home” reflects on the sense of connection that she still feels to Kansas, although she was mostly raised in and considers herself a northern Virginia local.

“Be My Home” hailed from Lauren’s latest EP, Light Dark, released about a year ago. Stream Light Dark by Lauren Calve on Bandcamp:

While Lauren was born in Kansas, her family comes from western Pennsylvania. In “Hard,” she sings about the generations of her family who worked in the steel mills of Beaver County.

“Too Soon to Pretend,” Lauren said, is about someone ruining a vacation. My mind immediately went to a memory of childhood trip with my family to Disneyland. As we floated through Small World, I, being the sentimental little kid that I was, was feeling deeply moved, unaware of the problematic aspects of the ride as I am now. My sister, in her typical blunt manor, exclaimed, “This sucks!” utterly ruining the mood.

After “Too Soon to Pretend,” John left the stage, leaving Lauren to perform solo. She spoke about her love and admiration for her mother, playing a song dedicated to her.

John returned to the stage, and Lauren introduced the next song, “Wildfire,” saying that it’s “the only love song I’ve ever written,” despite having had a lot of love in her life. Lauren finished her set with “Sweep.”

Lauren got her start playing at open mics at the now defunct Arlington venue Iota Club and Cafe. Her debut EP, Between the Creek and the Tracks, released in 2014, earned her a Washington Area Music Association nomination for Best Roots Rock Vocalist. She has opened for Sean Watkins of Nickel Creek, Cruz Contreras of The Black Lillies, Charlie Worsham, and Wade Bowen.

Catch Lauren locally on her current Light Dark Tour. Lauren also plays with an all-female lineup in the Lauren Calve Band, and they will be appearing this Saturday, March 2, at the Milkboy Arthouse, in College Park. Buy your tickets online! (Psst… Lauren also opens Ray Scott at Hill Country on Friday, March 1.)