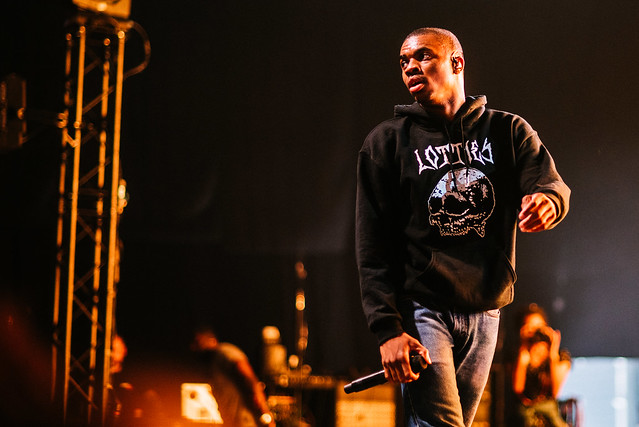 The Smile You’re on Camera Tour with Vince Staples stopped by at the 9:30 Club for a two-night run with Armani White and Buddy. It was a weird drizzly night on Saturday for the second night of this stop, but that wasn’t going to stop the sold-out crowd from coming and showing out.
Armani White went all out with the crowd and made sure to recognize those who amped them throughout their set. Buddy, Compton native, took the crowd to another level and got the crowd ready.

The stage production showcased the tour theme with surveillance cameras on the crowd and the screens depicting different channels. The channels flipped through random clips and live views of the crowd. At the start of the show, the lights went off, Vince walked up to the stage. This concert was in support of his third studio album, released in November 2018, FM!.

FM! is inspired by his love of Long Beach, California (Vince’s hometown). “Feels Like Summer” is a summertime ode to Long Beach. Even though it feels like summer all year round, it can be a dangerous place to hang out, says the song, but for Vince, that was a regular day.

“Run the Bands” described the hustle of getting money while “Don’t Get Chipped” told the listener of a cautionary tale of being on top once they made it . FM! features all West Coast hip-hop figures like Jay Rock, Ty Dolla $ign, and the legendary E-40.

During the set, Vince Staples played crowd favorites from previous albums like “Norf Norf,” “Blue Suede,” and “745.”  Never staying in one place, Vince worked the stage like a pro. “I don’t wanna say I can do it in my sleep because that’s arrogant, but I can a hundred percent do it my sleep,” he said in a recent GQ interview. Sounds arrogant, but Vince can walk and talk at the same time.

Vince has gone from performing in the DC area at U Street Music Hall, Sweetlife 2016, and recently when he co-toured with Tyler the Creator. It was good to see the 9:30 Club crowd show him lots of support and love by selling out both nights.

After he performed “Yeah Right” from Big Fish Theory, Vine closed the night with a tribute to Mac Miller’s NPR Tiny Desk Concert from this past summer 2018. Everyone stayed and danced and sang along to his lyrics, ending the night on a high and positive note.

You can catch Vince Staples on his current US tour through the end of March 2019.