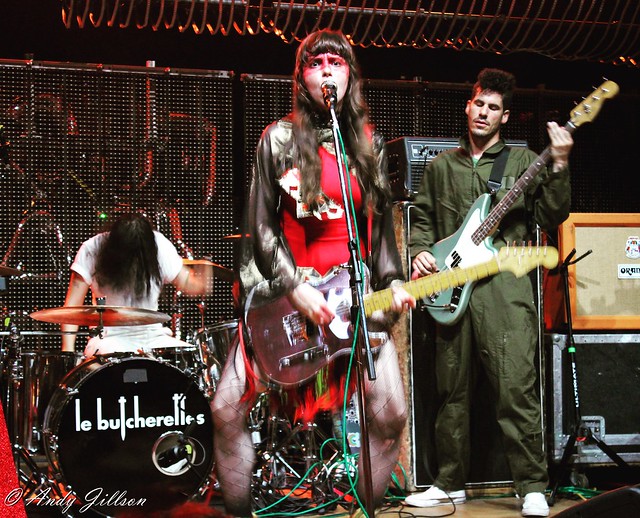 Need an innovative artsy punk rock band to see?!? Look no further. Le Butcherettes are that and then some. Now is your chance to see this fearless musical force for yourself. See Le Butcherettes live at DC9 Nightclub on Saturday, March 2. Time is of the essence though. If the show hasn’t already sold out already, it most likely will by Saturday night.

Le Butcherettes are a powerfully moving live band. Their live shows have all the passion and intensity of an arena rock show — only this band’s singer will literally stare straight into your eyes, penetrating your soul while she passionately wails into the microphone. I’ve seen frontwoman Teri Gender Bender abruptly jump into the crowd while performing, hitting the floor screaming and crying, and then lifting herself up to hug and console audience members. You can feel all the pain, sadness, happiness, joy, and unity. It’s all right there.

Watch the official music video for “give/UP” by Le Butcherettes on YouTube:

I’ve been fortunate enough to see Le Butcherettes four times in past, and I’m about to puke with excitement over their upcoming stop in DC to promote their new album. I would say that Le Butcherettes have struck gold again, and the band has taken their sound to a new level with the release of their fourth studio album, bi/MENTAL. For this record, Teri recruited Talking Heads keyboardist Jerry Harrison to produce the album. Not too shabby. And oh yeah, there’s a spoken word guest appearance by punk rock legend (and personal fave) Jello Biafra!