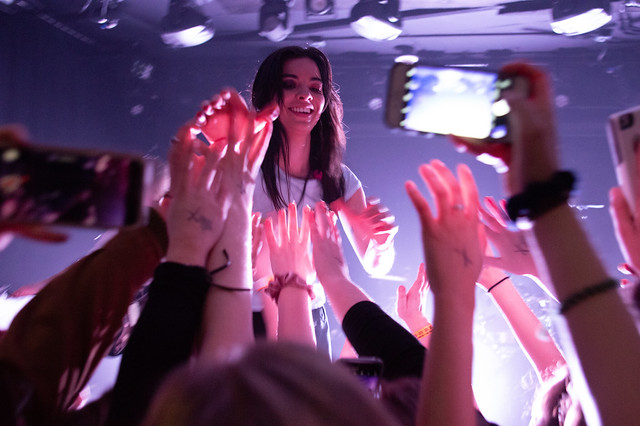 It’s been all uphill for The Aces since the release of When My Heart Felt Volcanic about a year ago. On Feb. 26, Cristal, Katie, and McKenna appeared on stage with total confidence. They were super good with their eye contact with the crowd, making sure that they interacted with everyone in the front. Alisa was a total boss on drums.

The Aces’ set consisted all of their album and a some of their first EP, I Don’t Like Being Honest. One of my favorite songs from the set was “Lovin’ Is Bible,” which is the perfect summer song all year round. The chorus is so catchy that you’ll hear me singing it throughout the whole day for weeks. My other favorite songs from the set were “Put It on the Line,” “Last One,” and “Fake Nice.”

Stream When My Heart Felt Volcanic by The Aces on Spotify:

The band’s encore consisted of a calm ballad, “Hurricane,” from Cristal and ended the night with “Stuck.” They brought an incredible energy to Union Stage, and I can’t wait to see what the future holds in store for them.

You can catch The Aces next in Toronto on March 5 through March 16, ending in the home state of Utah. Here are some pictures of The Aces performing at Union Stage on Feb. 26, 2019. All photos copyright and courtesy of Brenda Reyes.