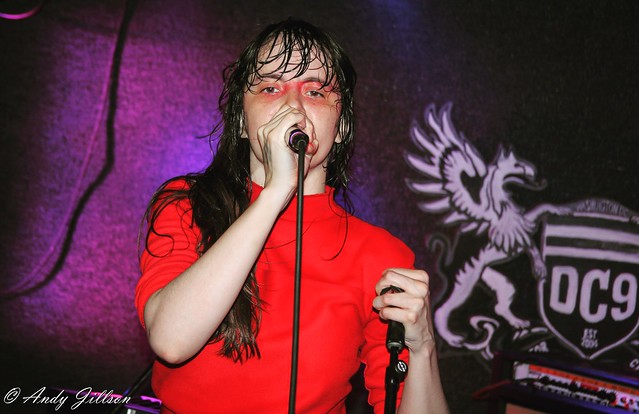 Led by founding member and singer/guitarist/keyboardist Teri Gender Bender, Le Butcherettes slaughtered a sold-out crowd at DC9 Nightclub recently. This fearless musical force is another one of those bands that I never miss an opportunity to catch performing live.

I’ve been following the Le Butcherettes’ breadcrumb trail for about four years now. Le Butcherettes have been rapidly gaining a large underground following of diverse music lovers. The band’s music appeals to such a diverse audience due to their musical style, stage performance, and cultural background. Of course, the fact that there are two female members in the band draws attention for their punk fury. And aside from all that, they are simply a great rock ‘n’ roll group.

Le Butcherettes paid a visit to DC9 on March 2 to promote their new album, bi/MENTAL. This is their fourth studio album, and Jerry Harrison of Talking Heads is the producer of this fine artistic statement. Le Butcherettes took the stage around 11pm and opened their set with one of my personal faves, “Burn the Scab,” which is the first track on their 2014 album, Cry Is for the Flies. The crowd lost their minds the second the heavy drum and keyboard sound hit their ears.

DC9 was at capacity for this Le Butcherettes show. It had sold out a day or two before the performance. Fans were packed together tightly, and the crowd extended against all the walls, bar, merch booth, and bathroom area. I felt a bit claustrophobic and uncomfortable to be honest, but the music quickly consoled me and eased my woes.

This Le Butcherettes show was a challenging show to photograph. There’s no photo pit at DC9 and not much room to maneuver, switch lenses, change angles etc. You’re either smashed up against the low-level tiny stage or you’re in the crowd smashed up against other sweaty concert-goers. I chose to weasel my way through the crowd and take as many shots as I could away from the stage, and from both sides. There must have been at least four or five other photographers there as well. I noticed the other photographers had picked one spot against the stage and didn’t move much for the entire set.

Le Butcherettes played for just over an hour. They ripped through a 15-song set primarily focused on songs off bi/MENTAL. As usual, Le Butcherettes played their hearts out and the crowd loved it. Their live performance had an aggressive punk rock attitude and sound to it, but it also conveyed a sense of peace, love, tranquility, and unity.

There was definitely pain and anger in their live performance, but there was also joy and redemption. Teri’s voice was so powerful and eclectic. She made you cry and scared the shit out of you. Le Butcherettes’ sound was actually more psychedelic and/or experimental to me than punk rock, and more passive than aggressive. That’s just my interpretation/perception though. I absolutely loved the completely different musical styles colliding. It was dark and beautiful. Songs Le Butcherettes played that stood out to me included; “Burn the Scab,” “spider/WAVES,” “strong/ENOUGH,” “give/UP,” “nothing/BUT TROUBLE,” “Stab My Back,” and “mother/HOLDS.”

Following Le Butcherettes’ set, Teri hung out in the crowd with eager fans. She signed autographs, shook hands, hugged, high-fived, and had fairly lengthy conversations with certain fans. I myself couldn’t resist and asked Teri to sign a couple of my records. I spoke with her for about 10 minutes, and she gladly autographed my record covers. We engaged in a somewhat personal conversation about some of the difficulties in life and human relationships. I also spoke with the other band members briefly. Everyone was in good spirits and the vibe was all positivity and love. There was a residual buzz lingerly in the venue after Le Butcherettes performance. All warm and fuzzy. Ahhhh, yes.

If you haven’t heard or seen Le Butcherettes I would suggest you stop screwing around and check this band out before they sell out every show on their current tour. Once you listen to a few of their songs you’ll likely be hooked, and you will understand the urgency.

Here are some photos of Le Butcherettes performing at DC9 on March 2, 2019. All photos copyright and courtesy of Andy Jillson.