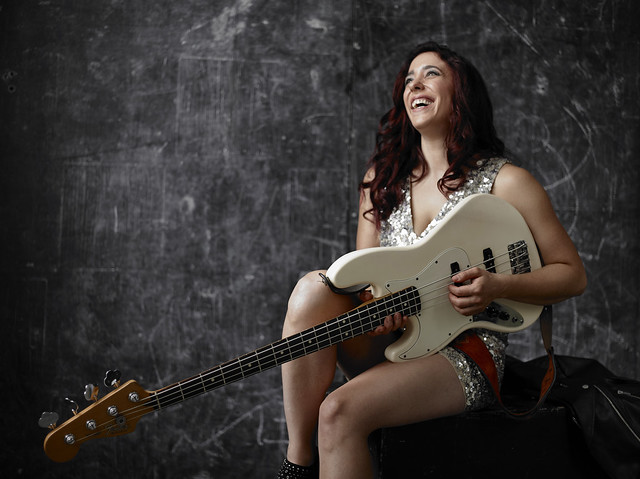 Danielle’s second solo album, Cry No More, was nominated for Best Contemporary Blues Albums at this year’s Grammy Awards. She is also nominated for a Blues Music Award for Instrumentalist: Bass.

As a bass player, Danielle Nicole was joined by a guitarist and a drummer in a power trio. The performers played to a packed house. The audience exceeded seated capacity, and a sizable contingent stood. Serious music fans attended this show. One couple at my table had driven in from the panhandle of West Virginia to see Danielle Nicole. The audience lavished respect and attention on the artist and her band, making for a great listening experience.

Stream Cry No More by Danielle Nicole on Spotify:

Danielle and her band are worth the attention. While her bass playing clearly stands out, her guitarist and drummer are also excellent. Danielle’s powerful voice came through clearly even as the trio turned the volume way up. A friend compared her vocals to Susan Tedeschi’s — both are white blues-soul singers who are distinctively not from the South.

Presenting a combination of originals and blues and soul classics, Danielle and her band played a baker’s dozen of songs. Her opening number, a cover of Ann Peebles’s 1972 “How Strong Is a Woman,” owed its sound to BB King and Buddy Guy as much if not more than to the original composition. She followed that with “It Ain’t You” from her debut solo album, Wolf Den. Toward the end of her set, she returned to the album for its title track.

The set included quite a few songs from Cry No More, including the title track, “Burning For You,” “Poison the Well,” “Just Can’t Keep From Crying,” “Pusher Man,” “I’m Going Home,” and “My Heart Remains.” A rocked-out rendition of “Baby I Love You,” made famous in the ’60s by the Motown girl group the Ronettes, broke up the string of songs from Danielle’s Grammy-nominated album.

The set ended with Danielle covering several famous artists in her own way. Beginning with the great Muddy Waters, numerous legendary artists have covered the incomparable bluesman Willie Dixon’s classic “I Just Want to Make Love to You” — from Etta James, Chuck Berry, and Buddy Guy to Van Morrison and the Rolling Stones, the Grateful Dead, and Tom Petty and The Heartbreakers. Danielle more than held her own against the weight of musical history with her version.

“With a Little Help from My Friends” might be a Lennon/McCartney composition, but Danielle took her inspiration from Joe Cocker’s blue-eyed soul interpretation. (For those of us of a certain age, it is instantly recognizable as the theme to the TV series The Wonder Years.) Receiving a standing ovation when they left stage after the song, Danielle and the band returned for an encore, tearing the house down with Prince’s “Purple Rain.”

Danielle Nicole comes from a musical family in Kansas City, Missouri. Her father, Bob Schnebelen, is a blues musician, as are her brothers, Nick and Kris. In 2000, the three siblings formed the band Trampled Under Foot. On the strength of their 2013 release Badlands, they won Contemporary Blues Album of the Year at the 2014 Blues Music Awards. Danielle also received the award for Best Instrumentalist: Bass, making her just the third woman won to win a BMA award for best instrumentalist (not counting vocals), following Deanna Bogart (horns) and Marcia Ball (piano).

The New Yorker has a profile online of Buddy Guy that asks, pessimistically, if the blues are going to die with him. Having just seen Danielle Nicole, I disagree with the slant of that article. The blues will live, and the blues will change. And with talented artists like this triple threat who can write, sing, and play, women take a more central, more visible position.