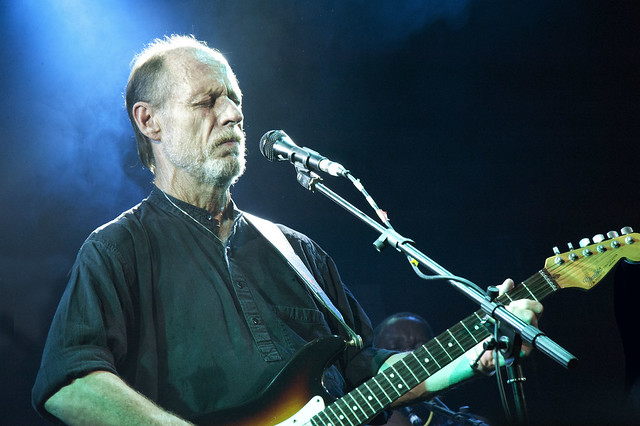 Paul Barrere of Little Feat performs at the Holmfirth Picturedome in England on Aug. 14, 2010. (Photo by Bryan Ledgard)

As part of the first wave of Southern rock, Little Feat, which, ironically, formed in Los Angeles, made all-time classic music in the early ’70s. They blended rock and blues, country and R&B, blues and folk, jazz, gospel, and soul, all with a high level of skill and a jam band sensibility. And their talents were still evident in a very good show at the Warner Theatre recently.

Allmusic gives the band’s self-titled debut and its next two albums, Sailin Shoes and Dixie Chicken, five stars. (For comparison, Elton John has the same number of five-star albums.) Despite the incredible quality of their work, Little Feat’s popularity didn’t blow up like other Southern rock acts, such as the Allman Brothers, ZZ Top, and Lynyrd Skynyrd.

While not achieving the the same popularity as those other bands, Little Feat made a significant critical and cultural impression. With Hispanic bassist Roy Estrada in the lineup for the first two albums and African-American conga and djembe player Say Clayton joining the band in 1972, Little Feat became an early racially integrated rock band, especially in the white-dominated world of Southern rock. Other musicians held the band in the highest estimation: In 1975, Jimmy Page named them as his favorite American band, and Elton John, among others, considers Bill Payne among the finest rock pianists.

The effect of local radio airplay in the ’70s can be hard to understand for those of us who grew up in a media landscape nationalized, even globalized, by MTV, then the internet. But local DJs at HFS, including Cerphe Colwell, who introduced the the band on Thursday night, made Little Feat extremely popular in DC. When the band recorded its breakthrough live album, Waiting for Columbus, in 1978, it did so largely in the Lisner Auditorium at George Washington University.

At the concert on March 7, part of Little Feat’s 50th Anniversary Tour, many of those who came had attended that landmark performance all those years ago, and many, many concerts since. Everywhere I looked, I saw vintage t-shirts of varying designs, marking the band’s different eras. Aside from teenagers who came with their parents, I was one of the younger people in the audience. Good music, though, is timeless, and rock history needs to be chronicled.

Little Feat didn’t rush, turning its songs into lengthy jams. They leisurely played 15 songs over two hours, with lots of solos and improvisation. The set began with “Spanish Moon,” with Say Clayton singing lead. On the rest of the of the evening’s songs, guitarists Paul Barrere, who joined in 1972, and Fred Tackett, a member since the band’s 1988 reunion, handled lead vocals.

Months shy of four decades after his passing, the shadow of founder and original songwriter Lowell George still hangs over Little Feat. He composed “Spanish Moon” and “Willin’,” and co-wrote “Honest Man” with Fred Tackett, “Dixie Chicken” with Martin Kibbee, and “Feats Don’t Fail Me Now” with Kibbee and Paul Barrere. Barrere had a hand in four other songs: “Skin It Back,” “Old Folks’ Boogie,” “Blue Jean Blues” (with Fred Tackett and Bill Wray), and “Let It Roll” (with Kibbee and keyboardist Bill Payne). Little Feat played Tackett’s “Church Falling Down,” and Bill Payne contributed “Oh, Atlanta,” as well as a song he co-wrote he with Robert Hunter, “Rooster Rag.”

The audience rewarded Little Feat with a rousing standing ovation at the end of their set. They returned for an encore to play “Feats Don’t Fail Me Now” and the crowd rose once more. After a thunderous round of applause, a sea of very happy Little Feat fans headed for the exits.