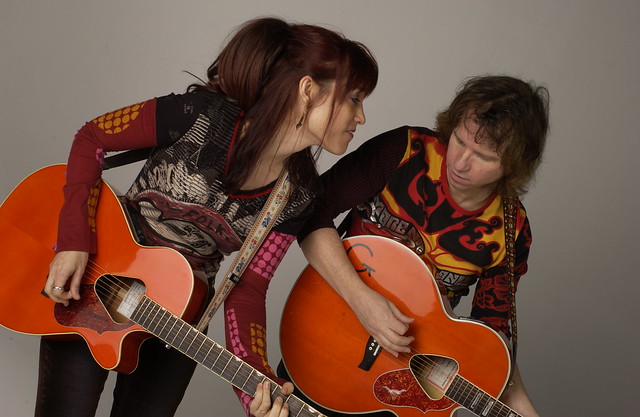 Arlington native Pete Kennedy and his wife and musical partner Maura played an early set at Jammin’ Java on Saturday evening. The duo, known and beloved as The Kennedys, were every bit of charming and talented as you could imagine.

Pete worked as a freelance guitarist in the DC area for nearly 20 years, working shows at major venues like the Kennedy Center, the 9:30 Club, and The Birchmere, as well as well as memorable “gigs from hell.” During a break between songs, Pete shared one of these stories from his new memoir, Tone, Twang, and Taste, about a vanity project put on a wealthy “creator” at the small stage at the Kennedy Center that, following several mishaps and never disasters, only lasted two nights.

It’s a hilarious story, as is the one about playing banjo in a dinosaur costume. Pete’s book also talks about opening for Bruce Springsteen and Steve Earle, playing at the Red Fox when Emmylou Harris was coming up, and going on the road with Mary Chapin Carpenter and Nanci Griffith.

I couldn’t put it down, and I highly recommend it to roots music fans, especially those who want to learn about DC’s place in the history of roots music. The book will introduce you to a whole host of colorful and influential artists, like the late guitarist Danny Gatton.

Speaking of Nanci Griffith, Pete and Maura met when he was touring as a member of her band, the Blue Moon Orchestra. After touring with Nanci together, Pete and Maura left to form their own act, which has gone own to receive much critical acclaim. They have received such acclaim for their albums, including some 30 Washington Area Music Awards. The duo released their most recent album, Safe Until Tomorrow, last year.

In the eyes of some critics, the quality of their work, which blends folk with pop/rock and a bit of country, has even surpassed that of Griffith’s.

Stream Safe Until Tomorrow by The Kennedys on Spotify:

The Kennedys opened their set with the title track of their second album, Life Is Large. The enthusiastic audience joined them on the chorus. They recorded the next song, one of the modern folk tunes, Richard Thompson’s “Wall of Death,” on their debut record, River of Stars. Having seen Richard perform this song in his wonderful Lincoln Theater concert in November, I have a special fondness for it, and it warmed my heart.

Maura drew attention to the lap steel guitar that Pete bought in August for a series of three Hank Williams tribute shows. Maura described Pete’s hours of practicing as surrounding her with endless “cartoon music.” I caught the tribute show at The Birchmere in December, and it was excellent. The Kennedys played one of their songs from the tribute, an arrangement of Hank’s “Setting the Woods on Fire” in the style of a duet between Johnny Cash and June Carter.

Having the lap steel guitar allowed The Kennedys to perform some songs live they hadn’t visited before in their shows. When they recorded “Velvet Glove” in the studio, Pete used a slide, and the new guitar allowed them to perform the song. Maura wrote “Umbrella” for Pete on their 25th anniversary, and “Rhyme and Reason,” in the style of Sergio Mendes ’66 exotica, is about writing a song.

For the last song with the steel guitar, they asked the tech to turn on a disco ball. Maura said, “This is a slow dance for all the couples… We’re going to take you back to junior prom.” The Kennedys play the classic 1959 instrumental “Sleep Walk.” You may not know it by name, I guarantee you’ll recognize the melody instantly.

After “Sleep Walk,” Maura invited requests, and the requests poured out of the audience. “So many requests,” she said. Limited on time (there was a second show later that evening), they were able to play just one, “Midnight Ghost,” a bit of a train song.

Maura introduced “Be Silent No More” as a song about speaking up, saying it could be about Me Too, but could also be about just about anything else. Influenced by her own experiences with her parents, who are in their ’90s, Maura wrote “Safe Until Tomorrow” “about caregivers, people who are taking care of their parents.”

The unmistakable chords of “Eight Miles High” followed immediately after. It was an appropriate cover for The Kennedys — the Byrds’ folk-rock sound exerts a clear influence on them. They brought the disco ball to close their set with “Midnight Train to Georgia.”

The Kennedys stepped off the stage for a brief moment before returning for an encore. “In turbulent times, there are still deep waters. I think John Lennon was tapping into that,” Maura said, and they launched into “Across the Universe.” She asked if they could they do one more song, and she dedicated “Stand” to the anti-hate resolution that just passed Congress. The audience stood and clapped along with the rhythm, before giving The Kennedys a rousing send-off.

Despite operating with time constraints from the venue, The Kennedys put on a really fun show. They have deep ties here, and many of the fans were heavily invested in their music. They come back here regularly, and they’re definitely worth catching.