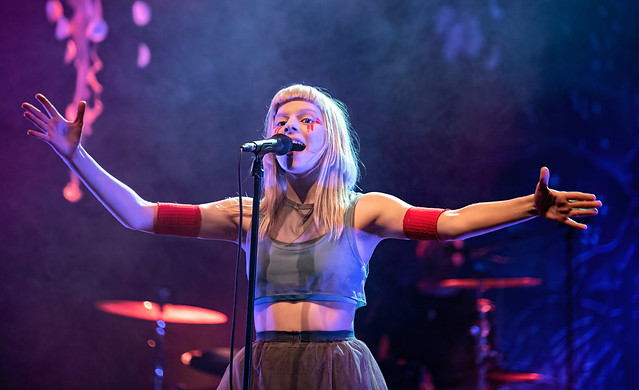 Aurora dazzles at the Lincoln Theater on March 10, 2019. (Photo by David LaMason)

Aurora Aksnes, better known as simply Aurora, seems to come from another world. But the expressive Norwegian singer landed at the Lincoln Theatre for a very earthbound headlining tour recently.

From her debut EP Running with the Wolves to the recently released Infections of a Different Kind (Step 1), Aurora has created an experience of child-like wonder and exuberance along with a display of excitement in her live shows that’s immediately infectious (maybe a pun is intended there). She’s often compared to Icelandic singer Björk, but she’s described her influences as coming from a variety of places, including but not limited to electronic music, dance, and even Bob Dylan and Leonard Cohen. She’s recorded a version of Oasis’ “Half the World Away” and performed a beautiful version of the David Bowie song “Life on Mars.”

The last time Aurora performed in DC was a couple years ago at the 9:30 Club, but on March 10 at the Lincoln Theatre things appeared a bit more grand and mysterious as she came out to a stage festooned with jellyfish suspended over the stage in front of an illustration of woods and trees, speckled with lights.

Starting the evening in a blue haze, Aurora opened with the somber notes of “Churchyard” from Infections of a Different Kind (Step 1) through to “Warrior” from her previous album All My Demons Greeting Me as a Friend.

Stream Infections of a Different Kind (Step 1) by Aurora on Spotify:

The stage set up allowed Aurora to dance and twirl as she pulled this sold-out theater to its feet. Soon after Aurora’s performance started, the crowd quickly got into the performance, dancing along. During one pause in the show, Aurora noticed a little girl dancing in the front row, and she couldn’t help but offer words of encouragement to the little dancer.

Aurora presented an amazing evening filled with beautiful music and spectacle. This was Aurora’s last stop of her North American tour, but we hope to see her again soon! Check out future dates here.

Take a look at some more photos of Aurora performing at the Lincoln Theatre on March 10, 2019. All images copyright and courtesy of David LaMason. 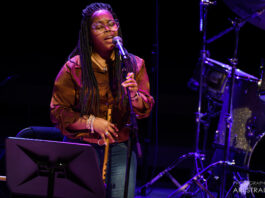 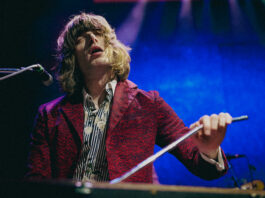 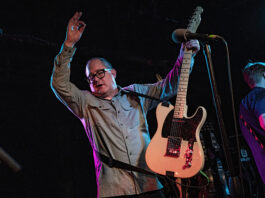