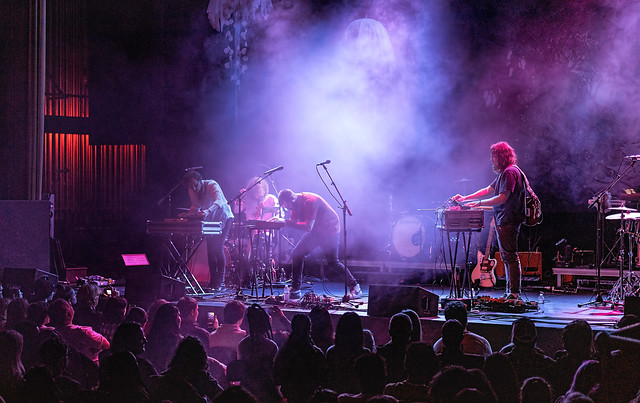 Talos performs at the Lincoln Theatre on March 10, 2019. (Photo by David LaMason)

Eoin French, the man behind the Talos, is onto something. Eoin, who studied music in the City of Cork in Ireland where he grew up, created fascinating pieces of music that ebbed and flowed, seemingly built layer upon layer of emotional energy at the Lincoln Theatre recently.

Singing in falsetto, the lyrics, especially on the new album Far Out Dust seemed to carry an added weight.  Take for example, “Safe love, safe water / Fire your heart and keep us breathing” from “Boy Was I Wrong” sounded romantic but then it’s followed by that almost a note of regret in the chorus “Boy was I wrong, so wrong.”

Stream Far Out Dust by Talos on Spotify:

Last year, I ended up going to a show where Talos was opening for Peter Bjorn and John. Having never seen Talos before, I struck up a conversation with the person next to me who was completely enthralled with their music. In fact, it seemed like a lot of those in attendance were there to catch this act I hadn’t heard of before. After that performance, it was clear what I had been missing.  Even on a small stage, Talos was clearly going places.  And I could clearly see what the fuss was about with the band, which includes Eoin on vocals/guitar/synth, Sonny Sampson on bass/synth, Josh Sampson on drums, Alex Sampson on guitar, and Sam McNicholl on drums/percussion.

Fast forward a bit and through the release of their second full-length LP, Far Out Dust, I find myself with Talos but this time on a bigger stage to a sold-out crowd opening for Aurora at the Lincoln Theatre on a cool Sunday night on March 10. The band took the stage under smoky blue lights to the whirling opening synths and whooshed percussion of “Odyssey” from the debut album, Wild Alee. Like its name, the song feels like a journey and a perfect starting point for this set. 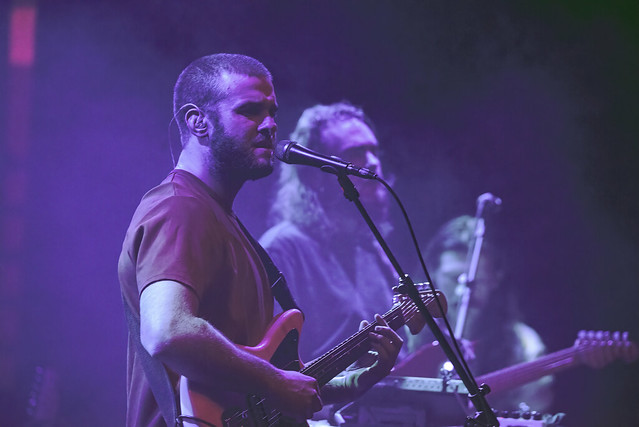 Eoin introduced “Dawn, The Front” as the “most important song on the record” and explained that he had hoped to collaborate on the song with good friend, Conor, but sadly Conor had passed away before they had a chance. Talos ended their all-too short set with a song from the O Sanctum EP called “Your Love Is an Island,” which sounded bigger and bolder than the recorded version with both bowed electric guitar and bass and ending in Sonny getting the entire audience to clap along.

Although this was the last stop with Aurora, Talos will be back in DC in May at Union Stage. Buy your tickets online, starting on March 15! And check out further dates here. The setlist included:

Here are some more photos of Talos performing at the Lincoln Theatre on March 10, 2019. All photos copyright and courtesy of David LaMason.