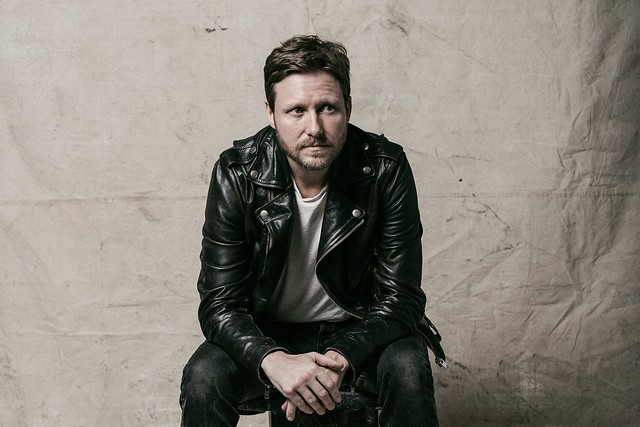 “I love this room,” said Bloodshot artist Cory Branan of DC9 on Tuesday evening in his northern Mississippi drawl. “It makes y’all who turned out on a Tuesday night look like a lot of motherfuckers.”

And while I’ve seen bigger crowds, I’ve seldom seen crowds more passionate, more invested in an artist. On May 14, the audience was keen to join in the fun. When he started to play “Sour Mash,” Cory had to ask them not stomp to the beat — his solo playing wouldn’t carry over it — but graciously said “thanks for participating!” As he was introducing “The Corner,” one very honest, plainspoken, and likely somewhat inebriated fan exclaimed “I like you as an artist!” Cory snapped back, “You should see me hang sheetrock,” which was especially on point, as the song mentions hanging sheetrock.

Indie label Bloodshot Records formed in Chicago’s burgeoning alt-country scene in the ’90s. Calling its music “insurgent country,” it held a shotgun marriage of crushing punk and real country music — none of that pop country nonsense. Cory Branan fits squarely into the label’s “anti-Nashville” brand, steeped as much in the rock ’n roll fervor of Memphis as he is in the traditions of its upstate cousins. He’s loud, he’s brash, he’s profane. He’s definitely at least a little left of center. He writes literate songs that are influenced, too, by singer-songwriters like Tom Waits, set to melodies that mix hard country twang with the righteous fury of punk rock.

Cory and his band, a troupe of Memphis musicians, opened with “I Only Know,” followed by “Prettiest Waitress in Memphis.” Cory introduced the third number as “a little anti-war song from vacation bible school.” Audibly calling the show on the fly, “Imogene” came next. Cory’s vocals carried clearly over the raging electric guitars and the heavy stick drum beats. After the song, he struggled worked with his guitar and denounced tuning as “a decadent European custom.”

The enthusiastic crowd joined in the fun, singing along on “Tall Green Grass.” Cory talked about having pride about coming from Walls, in northern Mississippi, “where the music comes from.” His feelings are somewhat mixed though, because the music comes from there “for a shitty reason.” After another song, Cory said, “People ask me how I write songs, now that I’m happy. I have a wife and two kids; I’m more happy. I write songs the same way I always have: out of share terror.”

Stream Adios, the latest album by Cory Branan, on Spotify:

The band took a break a break and Cory performed solo for a while. He started out with a couple pieces of new material. Introducing the second, he said, “This is a fucked-up song I just wrote. I’m a real piece of shit.” He told that audience that when he played it during his opening set for American Aquarium, someone went “Whoo!” leading to him reflect, “I don’t think you’re appropriately appalled by the narrator.” Getting more serious, he described the song as “a bit of a narrator experiment” and himself as a “huge fan of Randy Newman and the untrustworthy narrator.” He added, “I don’t think Disney even knows what he did in the ’70s.”

Cory played most of the solo tunes by request, which really made the audience feel involved in the show. When performers take advantage of the space, DC9 can offer a wonderfully intimate experience. Cory really understood how to do that, and the result was a something unique and special for those in attendance.

Cory introduced “Skateland South” as a song about “a place where I learned to skate, and I learned to make out, and I learned to skate backwards so I could do both.” As he set up for “Survivor Blues,” he recounted how he told his wife that he didn’t have the money to buy a car for a midlife crisis, so he bought guitar pedals instead. Cory’s wife replied that he was being generous with his use of the term “midlife.” He told the audience that “Wayward and Down” is his “mama’s favorite song, she just wants me to change every word,” which I’m sure isn’t entirely true; she’d probably be fine if he left the prepositions and definite articles.

The band came refreshed and was an absolute house of fire on “Visiting Hours.” They followed with a pair of songs from Cory’s latest album, Adios, “You Got Through” and “The Vow.” Cory said the Vow is about “a flawed man that I love,” his late father, who he described “as funny, but very stoic.” He told the audience that he initially hadn’t planned to play or record the latter because he thought it was “too Southern,” but his wife needled him into it.

After finishing his set with “A Girl Named Go,” Cory unplugged and made his way over to the merch table. I stopped to introduce myself, and I’m happy to say that Cory is as friendly as he is talented. An excellent night of alt-country from a great musician and a terrific guy!