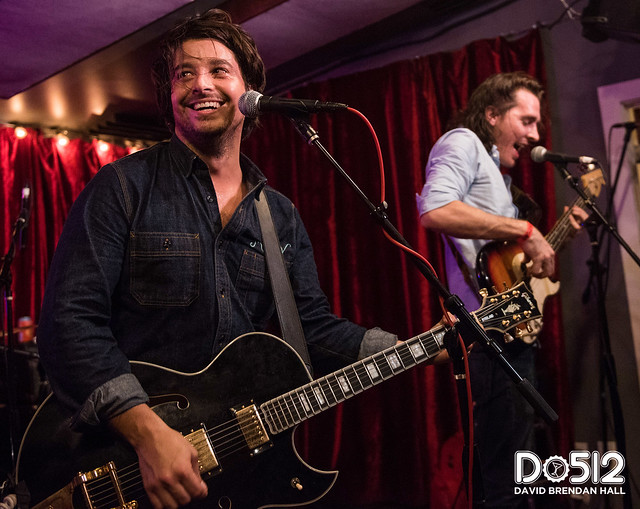 After Matthew Logan Vasquez’s recent concert at DC9, a fan sought me out to express her opinion the show. She was knowledgeable.

(To give credit where credit is due, the folks who go to shows at DC9 know music and are passionate about it. I’ve had conversations that have started after shows that have spilled onto the rooftop bar.) She compared Matthew’s show to an early set by My Morning Jacket in 2003 performed for a small audience.

Like My Morning Jacket, Matthew plays garaged-out indie rock with subtle hints of alternative country at the corners. He plays loud and hard, especially live, and without a discernible twang, but there is something in the rhythms, sometimes, that’s not quite straight-ahead rock’n’roll. It’s something older and more elemental that suggests the bones of the earth and the vastness of the West. You could hear his Austin roots on “Ghostwriters,” with its Outlaw beat, criticism of Nashville, and use of the Texas saying, “All hat, no cattle.”

Stream Light’n Up by Matthew Logan Vasquez on Spotify:

Matthew just released a new album this year — Light’n Up — and led with three songs from it. “Vacation” and “Trailer Park” were originally released as a single and its B-side, and address issues of economic distress. During the latter, the crowd shouted “Whoo!” and sang along with the chorus. Before playing “Ghostwriters,” which was included on the main LP, Matthew thanked DC for coming out to support him. After the song, he told the audience, “We have limited time, so I’m just going to blow through as much stuff.” Matthew’s set came as a part of an early show with PR Newman and Frances Cone that began at 6:45; a ’90s dance party was scheduled for the space at 10pm on May 18. True to his word, Matthew kept the chitchat to a minimum and played hard and loud.

Matthew has had a diverse career. From 2005 to 2014, he was the lead singer, guitarist, and chief songwriter of the indie rock group Delta Spirit, which is officially on hiatus. Matthew played “Strange Vine” from their 2008 album as his penultimate song. From 2009 to 2014, he occasionally toured in Middle Brother with John McCauley of Deer Tick and Taylor Goldsmith of Dawes; they released a self-titled album in 2011. Last year, he released a record and briefly toured with the collective Glorietta (consisting of himself, Adrian Quesada, Kelsey Wilson, Noah Gundersen, Jason Robert Blum, and David Ramirez). Matthew played from “Heatstroke” from that project.

In addition to Light’n Up, Matthew has released two previous albums of solo work. From Solicitor Returns (2016), he played “Maria,” and from Does What He Wants (2017), he played “Red Fish” and “Same,” the latter closing out his set. Owing to time pressure, Matthew dispensed with formalities surrounding an encore, and just played out his set and cleared the stage.

But even when it’s short and sweet, a show by Matthew Logan Vasquez is well worth your time.