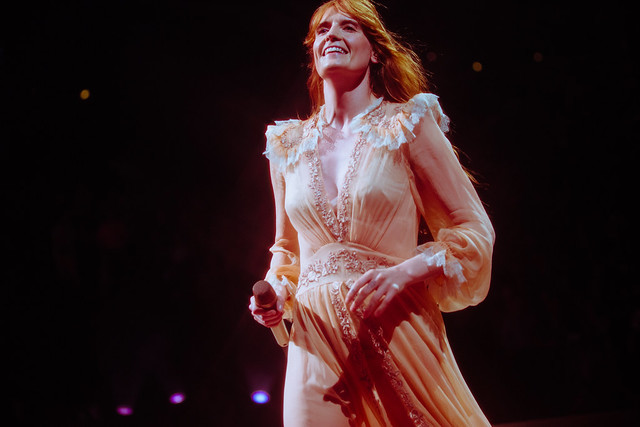 Blending Baroque pop, pastoral folk, and artful alternative rock, Florence + the Machine quickly broke into the mainstream after forming in 2007 and have enjoyed critical and chart-topping success. Recently, the band debuted their Game of Thrones track “Jenny of Oldstones” live during their headline set at FORM Arcosanti. Florence + the Machine is the only artist to be featured in the final season of the hit HBO series.

“When I first heard the song it sounded like a Celtic lullaby to me,” frontwoman Florence Welch said. “Celtic music has always been in my blood, so I felt like I do something with it. The magic and ritual in Game of Thrones, not to mention the costumes, have always appealed to me. I am honoured to be a part of the final season.”

Watch Florence + the Machine perform “Jenny of Oldstones,” featured in the final season of Game Of Thrones, live at Form Festival 2019, on YouTube:

“We’ve always been huge fans of Florence’s music, and the Season 2 trailer with her song ‘Seven Devils’ was possibly the most powerful we’ve ever had,” said Game of Thrones creators and longtime Florence fans David Benioff and DB Weiss. “So the opportunity to hear her otherworldly voice on our show was always at the forefront of our minds. We’re still pleasantly shocked that she agreed to sing ‘Jenny of Oldstones,’ and we’re in love with the result.”

About Florence + the Machine’s latest album, Paste wrote, “A new level of vulnerability from Florence Welch and deft, atmospheric production from Emile Haynie (Lana Del Rey) makes High as Hope another album of cathedral-filling, mountain-moving sound, with Welch’s vocals the main source of power.” “It’s raw, human, stripped of all excess and laid bare,” said Drowned in Sound, “and it’s quite possibly the most beautiful thing the band has ever released. Near perfection.”