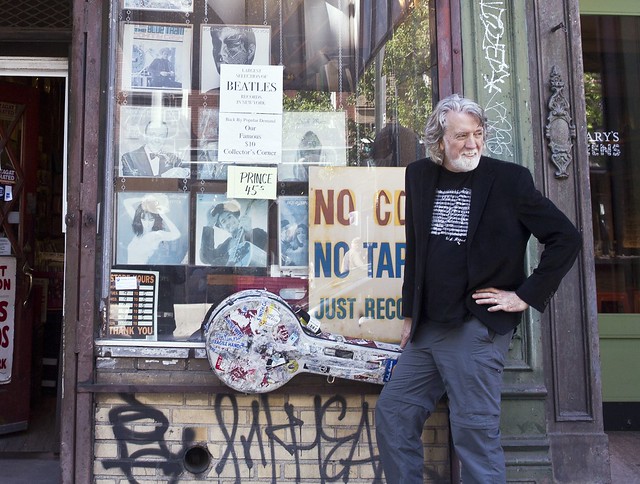 John McEuen, along with the String Wizards, performed an enchanting night of songs and stories at The Hamilton Live recently. McEuen, who I interviewed last year, was a founding member of the Nitty Gritty Dirt Band in 1966, and he played with the band for the better part of the next 50 years. Over the course of the evening, John shared stories from his time with the legendary, beginning with its roots as a jug band.

The evening began with John on stage alone last Saturday. To get the flavor of his performance, one might think of vaudeville. Before he turned to music at 17 after watching the Dillards, John’s first love was magic. He worked at the Magic Shop in Disneyland with his schoolmate and friend, Steve Martin — yes, that Steve Martin. (Later in the evening, John would show, on the screen behind, photos of himself and Steve together, then and now.) John’s act combined strumming the banjo and the occasional lyric with Dad jokes (he has raised seven kids), mostly about banjos. Here, I’ll tell you a couple:

“A man realized he left his car unlocked with his banjo inside. He ran toward his car shouting, ‘Stop, there are three more banjos!’”

“Scientists found the image of a banjo on Mars. This proves there is no intelligent life on Mars.”

This one’s not about banjos:

“I had an East German Shepherd. It kept people in my yard.”

John wound his way into playing the Beverly Hillbillies theme song, which turned into a singalong. He mixed the song with a bit of joking around, and he got to the self-deprecating remark, “So, there’s not a lot to do in DC at night, I guess?” He finished the song with the audience clapping to the beat.

John showed the first publicity photo of the NGDB on the screen, then a photo of himself as a young boy. More photos followed: his receipt from McCabe’s guitar shop for his first banjo, and John with Doug Dillard. He spoke about the legendary LA club the Ash Grove, a cornerstone for many artists. Last year, I covered Dave Alvin and Jimmy Dale Gilmore, who also drew inspiration from their experiences at the Ash Grove.

The musician then played “Washington at Valley Forge,” a traditional song covered by NGBD, and the first member of the String Wizards: Les Thompson, the original bass player of the NGBD. Together, they played part of “Some of Shelly’s Blues.” They were joined by the rest of the Wizards, John Cable (also formerly of NGDB and Matt Cartsonis.

In a particularly funny moment, Matt praised the trusty Dodge Dart. John segued into the band playing “Mr. Bojangles” by Jerry Jeff Walker, a top 10 hit for NGDB. He related the story of how the song hovered in the teens, and their management said that it couldn’t make the Top 10 because it wasn’t get played in NYC, which meant that other top markets wouldn’t pick it up. NGDB asked if there was anything they could do to get it on the air, and there was: playing a show at a girls’ junior high school.

The daughter of the programming director of the radio station they were trying to crack attended that school. For that reason, this school got a ridiculous number of top acts. John asked one of the nuns who had played there, and among the responses was “John Lennon, such a nice boy.” John realized that he had to take this very seriously: These young ladies had been exposed to some very high quality live music, and they wouldn’t be easily impressed. Fortunately, the show went well, and “Mr. Bojangles” was soon on the air in NYC, then other major markets; it went on to crack the Top 10.

The next song that John talked about was “Dance Little Jean,” written by Jimmy Ibbotson. Jimmy, he said, had gone on an “I hate us” (rather than *hiatus*) from NGDB, which drew chuckles from the audience. John and Jimmy were doing duo shows together, but when John heard “Dance Little Jean,” he convinced Jimmy to rejoin NGDB. He thought — and was right — that the song was a country hit. Matt sang lead and John Cable played the mandolin on “Dance Little Jean.”

John McCuen ragged on Les, referring to his “Bill Barr glasses.” He switched to the mandolin, and John Cable sang lead on one of McEuen’s favorite songs. Cable said, “If you have more than two kids, chances are that the wheels came off at 15 or 16.” He continued, “It worked out, but the teen years are tough.”

NGBD’s first paid job was opening for country legend Merle Travis, who wrote the songs “Sixteen Tons” and “Dark as a Dungeon.” Later, when McCuen went to put together the seminal album Will the Circle Be Unbroken, he was nervous about asking Merle to record with them. “I’d be proud to,” Merle said.

Stream Will the Circle Be Unbroken by the Nitty Gritty Dirt Band on Spotify:

The band moved into the Circle material, playing the first song recorded at those sessions, “Cannonball Rag,” with Matt on mandolin. John talked about how the band was excited to get Earl Scruggs in to play Carter-style guitar. He also mentioned that Circle is featured in episode six of the soon-to-air Ken Burns documentary The History of Country Music.

The band played some of one of Mother Maybelle Carter’s signature songs, “Wildwood Flower.” Maybelle, John told the audience, recorded her first album completely acoustically, with no electronic technology involved, in 1927 in Bristol, Tennessee, which is considered the birthplace of country music. John talked about seeing Maybelle play with Flatt and Scruggs at the Grand Ole Opry. “I’m going to meet those people,” he’d said to himself. The band followed this with an instrumental version of “Will the Circle Be Unbroken?”

McEuen and the boys played the Jimmy Martin song “Way Downtown,” followed by Roy Acuff’s “I Don’t Hear Nobody Pray.” When Roy Acuff came for the Circle sessions, he showed up in suit and tie, kind of looking down his nose at the long-haired NGDB. He went back into the booth and listened to some of what had been recorded, then he asked, “What do you call that?” After a pause, he said, “That ain’t nothing but good ole’ country music. Let’s make some more!”

The band revisited “Circle,” this time with vocals, and then John, onstage alone, went into perhaps the strangest story of the evening: playing at the funeral of the voice of Mickey Mouse. The man, it turned out, was a huge fan. He was also married, albeit secretly, to the voice of Minnie; it had to be kept quiet in case they divorced, to prevent any bad PR for Disney. John described the strangeness of playing the Mickey Mouse Club theme song with all the voices of the Disney characters issuing forth from the human mouths of their voices, live and in person, as the coffin very slowly was lowered into the ground.

John brought Matt back on stage for a “very important message.” He played solo what I can only assume is titled “Old Blevins,” a song describing a drunken old man who slurred his words and spoke of “fake news! Sad!” John is not an especially political act, but there’s a little bit of an old hippy in him. In his book, The Life I Picked, he wrote about campaigning for the ill-fated Gary Hart. (There’s more banjo humor in that title for you.)

The band played an unrecorded Felice and Boudleaux Bryant song, “My Favorite Dream of You.” The Bryant songwriting duo were responsible for hits like “Rocky Top,” “Wake Up, Little Susie,” and many others. The String Wizards closed their set with Dillard & Clark’s “She Darked the Sun,” and they came back for an encore to play “John Hardy.”

This was a charming, wholesome night of entertainment, steeped in lore and history. For fans who love the traditions of country music, this was a special treat. The recording of the first meeting between Doc Watson and Merle Travis was magical. It’s hard to fully capture the evening; it didn’t have the same structure as most concerts, and that was part of what made it so very special. I compared it earlier to vaudeville, and there was definitely something of a bygone era in it. John McEuen and the String Wizards didn’t just play the songs of the country legends from Will the Circle Be Unbroken; they presented them in a way you might have seen them decades ago at the Grand Ole Opry. It was a joyous journey back in time.