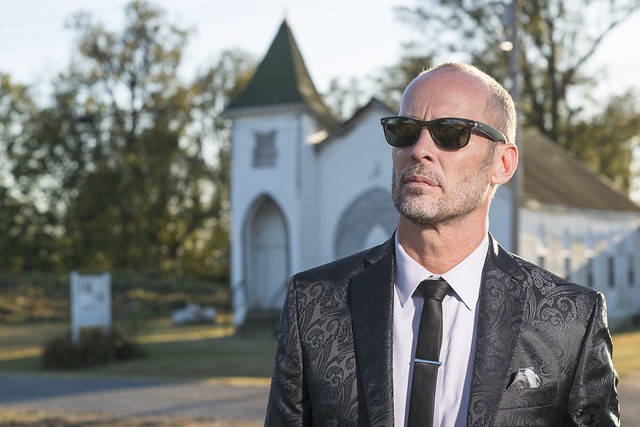 Paul Thorn plays a mix of roots rock, R&B, and gospel, black and white, all with a hint of his native Tupelo country twang. That’s an accurate description, but it does not convey of who Paul Thorn is. He shared some insights into the question during his performance at The Birchmere recently.

When he introduced “Pimps and Preachers” on May 31, Paul told the audience that his father was a preacher and his uncle was a pimp, and they were his two mentors. Paul has emerged on the side of love and light, and walking on the dark side a little bit has just made him a more open-minded, understanding person. He accepts and appreciates people without judgment.

Paul’s past is even more colorful that. His uncle, the pimp, taught him to box, and he was a professional fighter in the ’80s, rising to the #28 middleweight in the world. As he recounted before “Hammer and Nail,” he boxed four-time champion Roberto Duran. He lasted a respectable six rounds before the fight was stopped in the sixth round by the doctor because of a cut over his eye. He asked Duran why he had to knock him out, and Duran said, “I’d rather be the hammer than the nail.” Recently, Paul was looking through Duran’s autobiography at a Barnes & Noble and found that there’s a page about him. Duran knows his and likes his music, especially “Hammer and Nail.”

Paul’s band played him on, and they opened with the title track of Ain’t Love Strange. Paul declared, “I feel like testifying tonight if that’s alright.” He welcomed the audience to the tour for the 20th anniversary of that very album. He said you were in a for a treat if you liked that album — and if you didn’t, you could go have a smoke break.

The band grooved its way through “Blue Stew.” Picking up his acoustic guitar, Paul then told the audience how, before become a professional musician, he worked in a furniture factory and played covers two nights a week in a pizza restaurant, sprinkling in the occasional original song. A man named Steve, who had Parkinsons, was the first person to compliment Paul on his songs, and they became friends. Sadly, Steve got sicker and his wife left him. One day, on the phone, when Paul asked how he was doing, he answered, “I have a good day every now and now then,” which would become the title of a song (“I Have a Good Day”). Shortly after, Steve took his own life.

Switching back to his custom, colorful electric guitar, Paul said, “I used to live in a trailer with a beautiful girl.” Every Sunday, they would rent a VCR and two tapes so they could each pick a movie. “It was going so well at first,” Paul said, and the band launched into “Burn Down the Trailer Park,” with its screaming lead.

“How many of y’all have at least one crazy friend?” To the raised hands, Paul said “Those of you not raising your hands, you might be the crazy friend.” Paul related the story of a midnight run for chips with Dennis, who wasn’t good with girls. Dennis danced with a broom, which brought out the cops, who told him to stop. He refused, and he was arrested for disturbing the peace. When he got to the jail, he demanded a Mountain Dew, and surprisingly, the cops wouldn’t give it to him, so he stuffed his sheets in the toilet and created a flood. The cops then beat him, and Paul picked him up the next day. This was all by way of introducing a song about two crazy friends, “Fabio & Liberace.”

Paul expressed his deep, profound admiration for women, but said that their moods change often; hence, switching to acoustic guitar, he played “Mood Ring,” followed by “Black Rainbow.” Paul talked about leaving his suitcase behind and going to clothes shopping at Kohl’s, where he discovered clothes that once cost hundreds of dollars on sale for less than $20. He was feeling mighty fine about the deals, until one of his bandmates told him that one of his good deal shirts looked like a “Don Johnson shirt.”

On “Where Was I?” Paul picked up his black acoustic and reflected on his life against the events of history. “A Lot of Good Reasons” led into “a song to put your woman in the mood to make love to me:” “Help Me Out, Hook Me Up.” Paul found a Don Johnson look-alike in the crowd (though I didn’t get a good look, so I have no idea if he really was a look-alike), and he gifted the gentlemen the “Don Johnson shirt” from Kohl’s.

“Accept My Love” ended with a dramatic drum solo. There appeared to be some sort of technical issue with the amps, so the band went backstage and Paul stepped to the front of stage. He talked about how two young men vied the affections of his teenage daughter: one, the good guy, treated her right, and the other, the bad boy. “Of course,” he said, she went for the bad boy. Attempting to win her back, the good guy sent her a video of himself crying. “It didn’t work,” Paul said, and he played “Ain’t Gonna Beg,” totally acoustic.

With the malfunction resolved, the band returned to to play “That’s All I Know Right Now,” the final cut from Ain’t Love Strange. Paul asked how many were with their the sweethearts, and the band gathered around a single mic. Over just shakers and a mandolin, they sang “When the Long Road Ends” in tight harmony.

“It’s all right to have faith” Paul said, “but you’ve got to be humble, because you might be wrong.” Paul explained that, growing up in the church, he came to have a deep faith. When he went out into the larger world, he encountered people who held other faiths as deeply and sincerely as he held his own. While their faiths differed, Paul recognized something of himself in others in their having faith. “You Might Be Wrong” was a beautiful expression of what it means to ground tolerance and humanity in a deep, abiding respect for one’s one faith and the faith one sees mirrored in others.

Paul told a story about going to a “gentlemen’s club” for a stag party. “More like a perverts’ club,” he said. “The gentlemen don’t go there.” Continuing with the story, he said, “The strippers fell in love with our wallets.” One of them got up and danced, and the music was like Black church music, Paul said, but with “a raunchier beat.” When Paul made his latest record, the gospel album Don’t Let the Devil Ride, he included “Oh, Lord What I Should I?” He described it as a “gospel song for strippers.”

“Hammer and Nail,” came next, followed by an unexpected but delightful cover of the Jackson Five’s “I Want You Back.” Paul conjured up memories of his childhood, sitting in the living room, eating Honeycombs breakfast cereal, watching the Flip Wilson show, with the Jackson Five as the special guests.

Paul followed up with “Pimps and Preachers,” and then he got to the last song of his set. “I believe I’ve been sent here to give you a message,” he said, introducing “Everything’s Going to Be Alright.” This number had people standing up and dancing, clapping along, a rarity for The Birchmere. The closest thing to compare it to is a revival.

That atmosphere continued in the encore, a slowed-down, bluesy version of “Love Train.” Paul told the audience to really listen to the lyrics and what they had to say. He asked for the lights to be turned on so he could go into the crowd. He carried a mic into the crowd, singing, throwing his arm around people, shaking hands. Religious or not, everyone there felt at least a little of the bit of the spirit. I certainly felt when it Paul put his arm over my shoulder. It was a moment of love and fellowship, music facilitating human connection.

If you want to hear to some good, rocking music and get nourishment for your soul, you can’t go wrong with Paul Thorn. He’s a dynamic performer who can put some real muscle behind well-crafted, sensitive songs. If you go see Paul Thorn, you’ll experience a range of real feelings, and you’ll leave feeling lifted up.