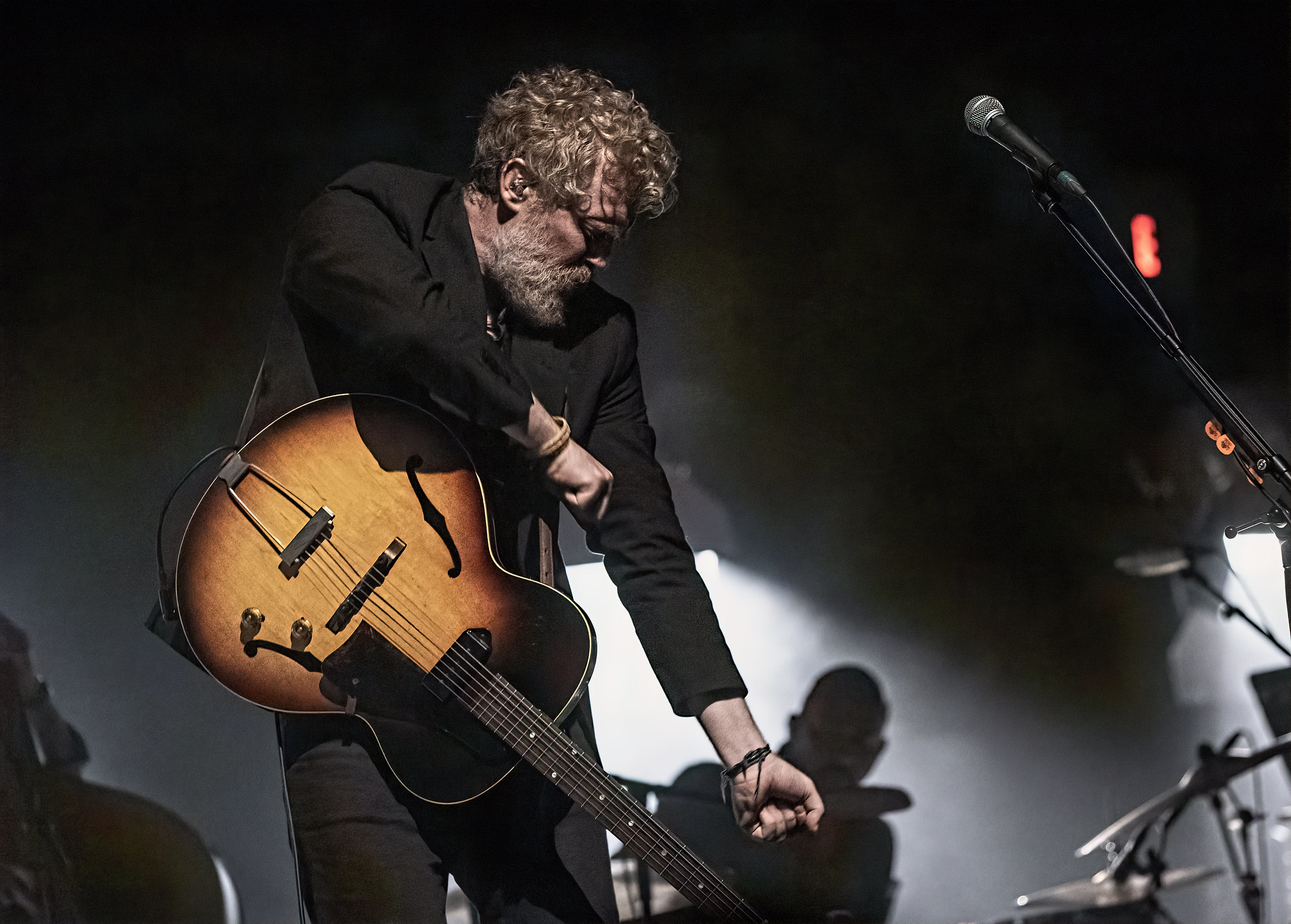 Glen Hansard performs at the Lincoln Theatre on June 3, 2019. (Photo by David LaMason)

When I listen to Glen Hansard’s music — especially songs from the new album, This Wild Willing — I can picture a man who has two feet planted firmly in the past but is stretching out across this temporal divide to grasp the future. His music often straddles the line separating old folk tradition and modern tones and feeling.

In This Wild Willing, songs often start low and build toward an explosive end. On tracks like “Fool’s Game,” he incorporates things like a harmonizer often used by artists like Bon Iver and Chance the Rapper. And then on other songs like “Good Life of Song,” there’s that warm feeling of something familiar. I love that idea of using tradition as a bridge than as a crutch and Glen does that so well — whether it be a variation of soul or blues or those ancient folk undertones, it’s a foundation; something to build upon.

Performed live, Glen Hansard’s music becomes something else. As someone who began his career busking on the streets of Dublin, it comes as no surprise that his performances are, in themselves, works of art. And June 3 at the Lincoln Theatre was no exception.

Before the actual show, Glen walked on stage to perform “Say It to Me Now” alone but for his acoustic guitar — no microphone and alone at the edge of the stage. A powerful start (before it would end nearly three hours later) to an amazing night of music. After a fantastic performance by opener, Junior Brother, Glen returned to the stage along with his band that included Earl Harvin on drums/percussion, Romy on keyboards/vocals, Michael Buckley on saxophone/flute, Anna Roberts-Gevalt (of Anna and Elizabeth) on violin, Joe Doyle on bass, Rob Botchnik on guitar and lute, and Javier Más on Spanish and electric guitar.

Starting the set off again with “Fool’s Game” from the new album, the band started to a dimly lit stage, but near the end of the song a projected image of Aida Shahghasemi, a singer and daf player who has performed with Glen and with fellow Swell Season member Markéta Irglová, as the smoke from the stage played across the beam from the projector.

Stream This Wild Willing by Glen Hansard on Spotify:

Playing through new songs and some older favorites like “When Your Mind’s Made Up” and “My Little Ruin,” Glen took a moment to introduce “The Closing Door” by adding a bit behind the song — that it was inspired by a feeling one gets when you see someone and you know it may be the last time you see them. 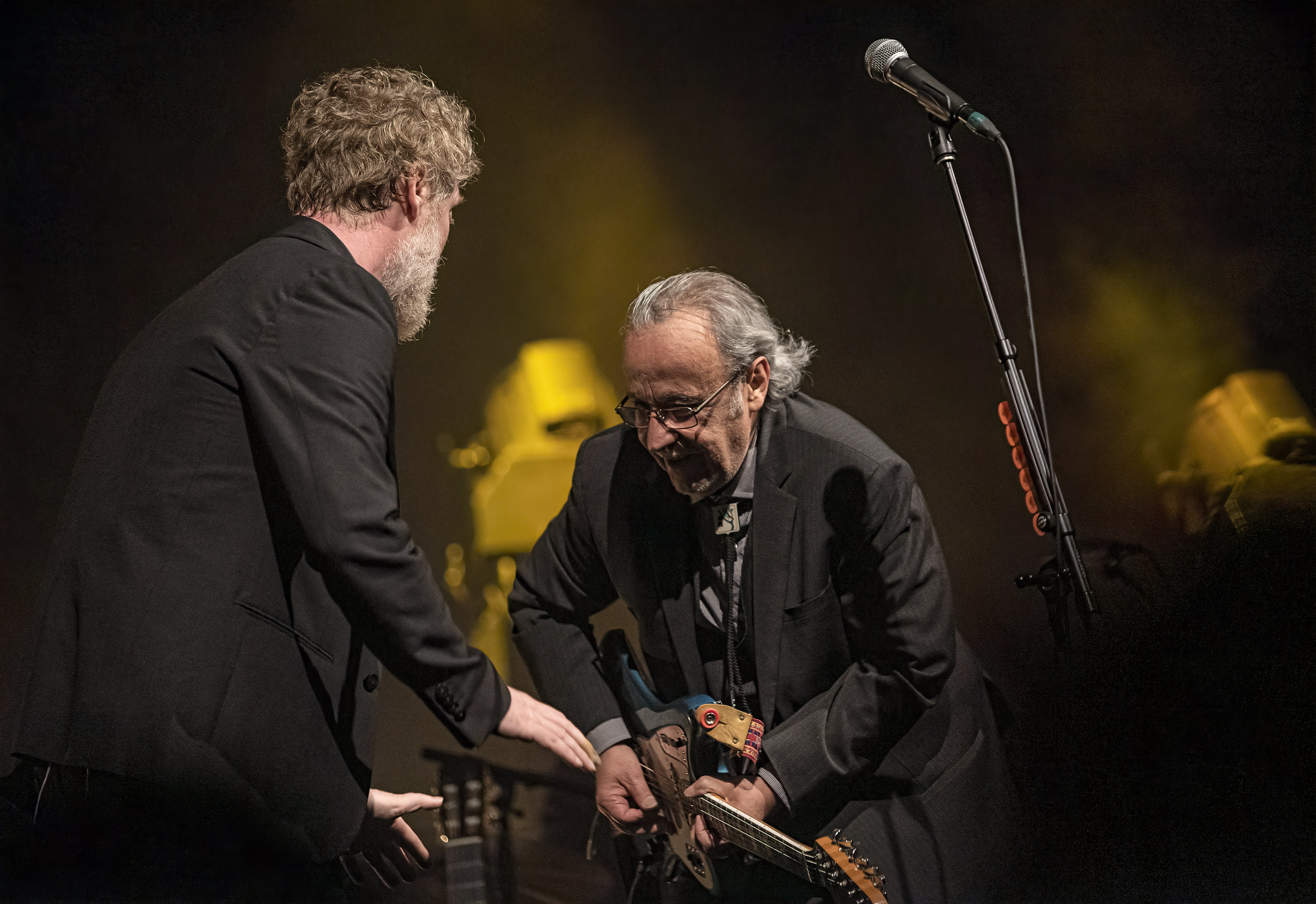 Glen also performed “Fitzcarraldo” by his band The Frames — a song that sounded great with that full sound from this eight-piece band. But when in the middle of an extended “Didn’t He Ramble,” Glen passed off his electric guitar to Javier in mid-strum to meld into a version of The Doors’ “Riders on the Storm” to then pass the guitar back to Glen (after a bit of dancing, of course), which was a highlight. And then there was when most of the band exited the stage while Glen came back to the edge of the stage singing right to the crowd and sat to deliver one of the more searing moments of the set.

Near the end of this moving set, Glen asked for an audience member to come up and help him with the lyric sheet for a song by Fergus O’Farrell called “I Owe You Nothing” — the first time, as Glen remarked, this song may be played in America. And then he called up more audience members to help out with another O’Farrell tune, “Gold.”

And if that wasn’t enough, for “Her Mercy” Glen brought up to the stage Moji Abiola along with some of the audience who were there to help out with the chorus. An unforgettable night of storytelling, love, and a feeling of community in a set that seemed to end too soon.

Although Glen Hansard’s current tour has wrapped up, he does start a second leg back in the Fall. Find more dates here.

Here are some photos of Glen Hansard performing at the Lincoln Theatre on June 3, 2019. All photos copyright and courtesy of David LaMason.