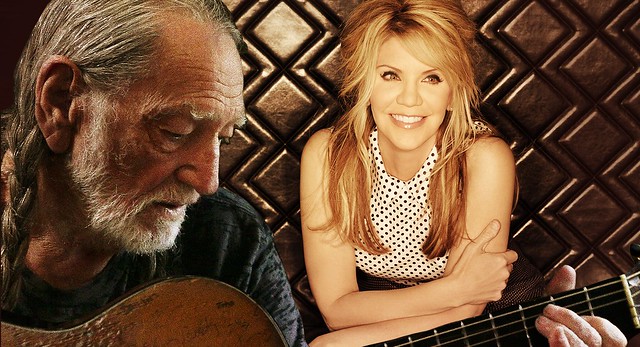 The tour follows Willie’s latest album, My Way, released in September 2018. The album was jam-packed with hits from “Summer Wind,” “I’ll Be Around,” and “One for My Baby (And One More for the Road).” The album received the Grammy Award for Best Traditional Pop Vocal Album. Willie will release Ride Me Back Home, his 69th studio album, on June 21 via Legacy Recordings!

Alison of course plays her classic hits while on tour — hits including “When You Say Nothing at All,” “New Fool,” “I’ve Got That Old Feeling,” and “It’s Goodbye and So Long To You.” In 2017, she released her fifth studio album, Windy City, which included 10 covers of classic hits. The album hit #1 on the US Top Country Albums Billboard and peaked at #9 on the US Billboard 200.

Watch the official music video for “It’s Hard to Be Humble” by Willie Nelson from the forthcoming album, Ride Me Back Home, on YouTube:

As you may have guessed, Willie’s My Way album was a tip of the hat to Frank Sinatra, and Stephen Thomas Erlewine of AllMusic says the album was a success.

“This is light and breezy, music that suggests the swinging heyday of Sinatra without ever quite sounding like a dusty old Capitol LP, not even the horns are sighing and blaring. Chalk that up to Nelson, who sounds limber if a bit scraggly, both in his voice and on his guitar. There’s a wry, insouciant charm to his performances: he knows how to ratchet up the drama in ‘It Was Very Good Year,’ realizes ‘My Way’ is irresistible hokum, and slides into the calming melody of ‘Summer Wind,'” Stephen wrote.