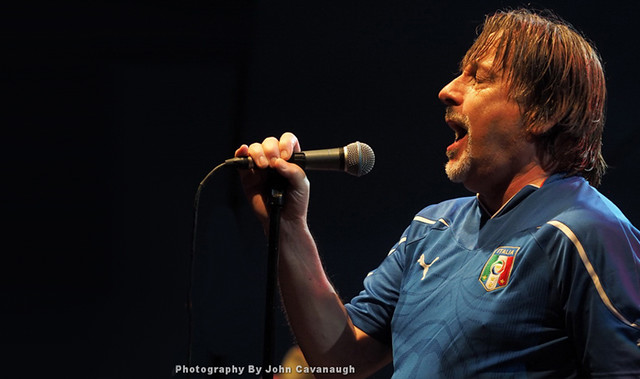 On June 15, Johnny stayed engaged with the audience throughout his set, exuding character and charm. This was a two-way conversation, an old familiar dance. Johnny knows his fans, and Johnny’s fans know him. They knew that when he said, “I’m in a mood tonight,” and told them they’d have to put up with him, that this was just the usual Johnny. When he said he was in charge tonight, and he declared he wasn’t going to take requests, that not only *would* he take requests, but that he was inviting the audience to shout them out.

The Asbury Jukes have a configuration more like a big band than a typical rock band. Johnny sings, but does not play an instrument. The band includes the main rock instruments — electric guitar, bass, and drums — along with keyboards, as well as a horn section, consisting of a sax, trumpet, and trombone. Without the band making a point of it, all the activity on the stage drew the eye.

Johnny opened the set calling out for the band to play the Temptations’ “My Whole World Ended.” The crowd started to heat up, so Johnny cooled them off a little by warning them he doesn’t have nearly the voice of Temptations lead singer David Ruffin. Johnny’s fans think pretty highly of his voice, though. Sitting outside the venue after the show, a woman exclaimed, “What a voice!”

Following the Temptations cover, Johnny sang a couple of his original songs, “Coming Back” and “Hard to Find.” On the second, the trombone player put down his horn and clapped along to the beat. Before the band launched into “I Played the Fool,” Johnny sang the bassline then sang it again midway through the song. “Wait till we get the piccolo,” he said.

“I feel like a little blues!” Johnny declared, whipping out his harmonica for the Muddy Waters classic “Don’t Go No Further.” Johnny told the audience about playing a show with Muddy and country-rock band The Outlaws. At the time, Muddy was 65, but he was so charismatic that he had the college girls hanging all over him.

“Gin Soaked Boy” featured a trumpet solo. Johnny apologized to the front row for having eaten raw tuna. During the song, he called out a flash in the crowd. Someone shined a light on the camera, and Johnny cried out in exasperation, “I don’t need a light on it!” The song caught up to him and he said, “I missed my harmonica solo talking.”

Without a break, the band plowed straight into “Better Days.” Johnny made his only political comment of the night, saying “A few more tariffs will make it all right.” The keys player came to the mic to sing “Love on the Wrong Side of Town” with Johnny, and the audience chimed in on the chorus. Johnny asked, “Do you want to hear it again?” and queued the band up for another go.

The Birchmere’s disco ball lit up at the beginning of the R&B classic “Stagger Lee,” which included a meaty trombone solo. Between “This Time Baby’s Gone for Good” and “It’s Been a Long Time,” someone shouted “Shut up!” at Johnny. Johnny asked why he would say that. The instigator replied, “I’m drinking,” to which Johnny said “Well, let me join you,” and helped himself to a swig.

“Dropped Again” led into a couple of covers. The crowd jumped in on “Walk Away Renee,” and Johnny steamed it up on the Rolling Stones’ “Happy.” The keyboardist took a turn at lead vocals, and then Johnny and the band played tribute to the late New Orleans piano man and hoodoo master Dr. John with “Such a Night” and “Iko Iko.”

Strobe lights shined into the audience as Johnny sang “Talk to Me.” Johnny invited the audience to sing along with the chorus, singling out one man in particular to lead. “What’s your name?” Johnny asked. “Who cares? Get the fuck out!” It was a pure Jersey attitude moment, and the crowd ate it right up. “I don’t want go to home!” someone shouted — the title of one of Johnny’s signature’s songs. “I wish you would!” Johnny shot back without a pause.

Johnny satisfied the request for “I Don’t Want to Go Home” as the next to last song of his set. Before he got there, though, he sang “The Fever,” and the band covered “Money (That’s What I Want).” Johnny put one of the servers on the spot, bringing him up to sing a line, and like any good bar band frontman, told his audience to tip generously.

Johnny finished his set with “Shake ‘Em Down.” A standing ovation brought him back for a two-song encore: his signature “Hearts of Stone” and “We’re Having a Party.” A second standing ovation saw him out.

A heartland rock group, Southside Johnny and the Asbury Jukes take pride in being an excellent club act. They’re working-class guys who make music with sweat and soul, and there’s nothing fancy or pretentious about them. Their show feels like walking down the street to see a familiar act. It almost feels like family.