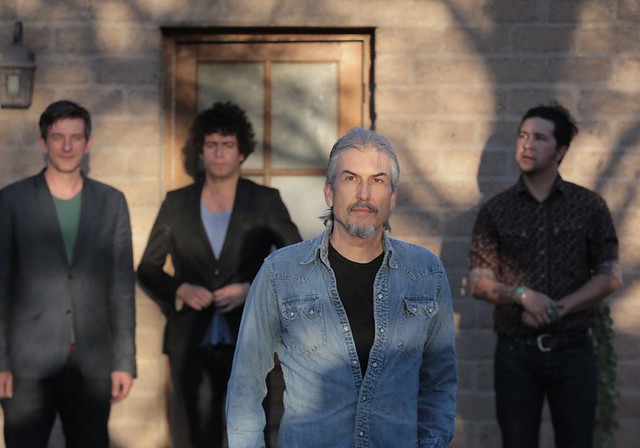 Howe Gelb referred to himself as an “indie rocker” recently at DC9, but others have called him an alt-country godfather.

With his band Giant Sand, Howe created a uniquely southwestern sound, a haunting Arizona desert mix of underground rock, outlaw country, Mexican music, and a touch of piano jazz. He ended his tight set on an early Giant Sand song, “Thin Line Man,” the song that lends its title to the 1986 album Ballad of a Thin Line Man.

That wasn’t the oldest song Howe played, however. He wrote “Steadfast” in 1975, though he didn’t release it until much later, on Giant Sand’s 1993 album Black Out. Howe describes the song as “made from scraps of mental notes a flood by a teenager.” His family last their home in eastern Pennsylvania to flooding caused by Tropical Storm Agnes in 1972, after which they moved out Tucson. Howe said that while “some of the events have come true,” it’s not “because of clairvoyance, but because everything does.”

Before he got to his own material, though, Howe opened his set with a series of four covers, each one entirely different. Accompanying himself on electric guitar, he began with the Waylon Jennings outlaw country ballad “The Door Is Always Open.” Next, he played John Hartford’s bluegrass classic “Gentle on My Mind.” He joked, “I should just play other people’s songs.” Then he turned to a lesser-known songwriter from his own Tucson milieu, Rainer Ptacek, with “Storyteller.”

Howe completely changed it up with the next piece, Bob Dylan’s “All Along the Watchtower,” played in jazz style on the keyboard. On top of the jazz style, Howe went wild with kooky notes and effects. He just completely went for it. This was mostly definite weird, but Howe made the weirdness work with the song, rather than clashing with it. This may also have been the moment the audience questioned whether Howe was joking about just playing other people’s songs.

The audience got new songs in addition to old ones at Howe’s show. “High Lonesome Troubadour” barely had a name yet. Howe remarked that he’s “trying to write ‘em fast now and put ‘em away” because “a man my age needs a hobby.”

Stream Returns to Valley of Rain by Giant Sand on Spotify:

Howe figures he has the market cornered as the only indie rocker working on standards. He described the requirements for a standard: It has to be about love, either a celebration of, or lamenting the demise of, and it can’t be self-pitying. Howe played “Gathered,” which was written in lieu of a ceremony to marry his godson. “There’s a chance when I’m done singing this you all might…” he joked, eliciting laughter from the crowd. Howe played a couple other standards, one of which began “World peace declared.”

Howe’s set gave a compact but wide-ranging view of his work and his influences. Despite the range of music played, it all held together. From country-rock to jazz standards, the desert wind blew through it all. You could practically feel the dust and sand. This was the sound of the Southwest.