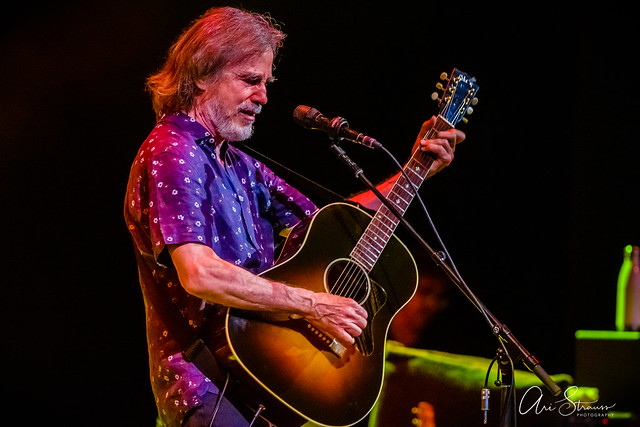 On the eve preceding July 4, legendary singer-songwriter and Rock and Roll Hall of Fame inductee Jackson Browne played two dynamite sets of his hits and well-chosen covers to an electric, celebratory, sold-out audience.

After playing “The Long Way Around,” Jackson remarked, “It’s a beautiful evening, isn’t it?” Wolf Trap’s serene beauty, both the natural loveliness of the park and the elegant construction of the venue, lent itself to the mellow, thoughtful vibe of Jackson’s music, and the crowd was totally swept up in the experience.

Ranked the 37th greatest songwriter by Rolling Stone, Jackson opened his first set with the title track from his 1993 comeback album, I’m Alive. He moved on to “a song I wrote more than years 40 ago” with Glenn Frey of the Eagles, “Take It Easy.” Before the song, he said, “I’m just going to sing it like I did back then.”

Switching to the piano, as he would do periodically throughout the evening, Jackson played “The Pretender,” the title cut from his 1976 album. While only a minor hit initially — reaching #58 on the charts, and only staying there for five weeks — the “Pretender” became one of Jackson’s best-known and loved songs through classic rock radio airplay and live performance. By the end of the song, some in the audience stood to show their appreciation.

Jackson quipped that he should be “calling this the Out of Order Tour,” and went back to his guitar. The opening notes of 1989’s “Enough of the Night” brought a healthy part of the crowd to their feet in anticipation.

For being on such a large stage, Jackson was unusually attuned and engaged with his audience. He replied to someone in the crowd, “You don’t really want to hear ‘Cocaine’.”

Jackson’s son Ethan informed him that his song “These Days” was being sampled in hip-hop tracks. He got to that tune a few songs later, but first he played what he called “an update” of the song “The Long Way Around.”

After “You Love the Thunder,” the West Coast native said, “I can never understand what are people are yelling on the East Coast?” There was a pause, then Jackson said, “Zevon?” You want some [Warren] Zevon?” He told the crowd he’d recently found an interview with Warren Zevon, who he called a good friend, from near the time of his death in 2003. “I miss him quite a bit,” Jackson added, before switching to electric guitar and playing one of Zevon’s compositions, “Mohamed’s Radio.”

Jackson remarked, “It occurred to me to do shows where I do a little less talking — a lot less talking.” The upside, he said, is that “I get to play more songs.” But Jackson has always been outspoken, and even restrained, he still had plenty to say.

For the Latin-sounding “Lives in the Balance,” written with Gene Rodriguez, Jackson’s background singers joined him at the front of the stage. He spoke of his old neighborhood in Los Angeles, “The Avenues,” a heavily Latino area of the city that gives its name to a gang. “The vatos lost their shit,” Jackson told the audience, when they found out “these girls from South Central could sing in Spanish.”

Gene runs a cultural center in the neighborhood. “Lives in the Balance,” Jackson explained, is based on a woman who came to America when she was 12 and now works at that center. Someone in the crowd decided to heckle him at this point, and he responded, “I hesitate to ask you to repeat that.” The irritant’s comment could not be heard, but Jackson chided them, “We’re all immigrants here.” Jackson revisited this theme during the second set, when he covered Steve Earle’s “City of Immigrants.”

“It’s right there underneath the surface every day: the situation on the Southern border is intolerable,” Jackson commented. He said that the situation in Central America has been developing for a long time, and that the United States has played a key role in creating it. Since the US funded covert wars in the region in the 1980s, living conditions in those countries have gotten worse and worse, making people desperate to escape to the United States.

Jackson finished his first set with two ballads on the piano, “Sky Blue and Black” and “For a Dancer,” bringing the total of songs played to an even dozen. After intermission, he opened with “Redneck Friend,” followed by “Tender Is the Night,” which is named after the F. Scott Fitzgerald novel.

The audience rose to show their appreciation after “Fountain of Sorrow.” After they settled back down, Jackson talked about “Walls and Doors,” a song written by the Cuban musician Carlos Verdela that he translated into English. Carlos, he said, is loved in Cuba because he’s willing to say in song “what’s really going on.”

When brought up Carlos, Jackson talked his experiences in Cuba. Cubans called Americans “Yumas” because a of cultural love for the Western 3:10 to Yuma starring Glenn Ford. (The film came out in 1957, so it may have reached the island before the Revolution.) Concerts are weird in Cuba, Jackson said, because tickets can’t be sold. He said that they lack a system to determine who will get to attend.

Jackson spoke less during the second set, gradually building up the crowd’s fervor with his biggest hits. Jackson had his highest-charting hit with “Somebody’s Baby,” written and recorded for Fast Times at Ridgemont High.

But Jackson’s early work, even if it didn’t peak as high, still stood out as truly powerful stuff, 40-plus years on. His ’70s classics “Doctor My Eyes” and “For Everyman” are absolutely brilliant, as is “In the Shape of a Storm,” a song for which Jackson said, “it’s impossible to give you any kind of introduction.”

This all led up to the last song of his set, the anthemic “Running on Empty.” While some in the crowd had stood at the beginning of earlier songs, this was different. Every person I could see rose together to take in part in rock ’n’ roll communion. This was a sacred rite, the invocation of a spirit we keep deep inside and allow ourselves to pay homage to only in these sanctioned moments of blessed release.

The audience gave Jackson a thunderous applause. After he came back to the stage, he played a four-song encore. He began with Steven Van Zandt’s “I Am a Patriot,” moving on to Tom Petty’s “The Waiting,” and his own “The Load Out,” before finishing with Maurice and the Zodiacs’ “Stay.”

Here are some pictures of Jackson Browne performing at Wolf Trap on July 3, 2019. All photos copyright and courtesy of Ari Strauss with rights reserved to Jackson Browne. 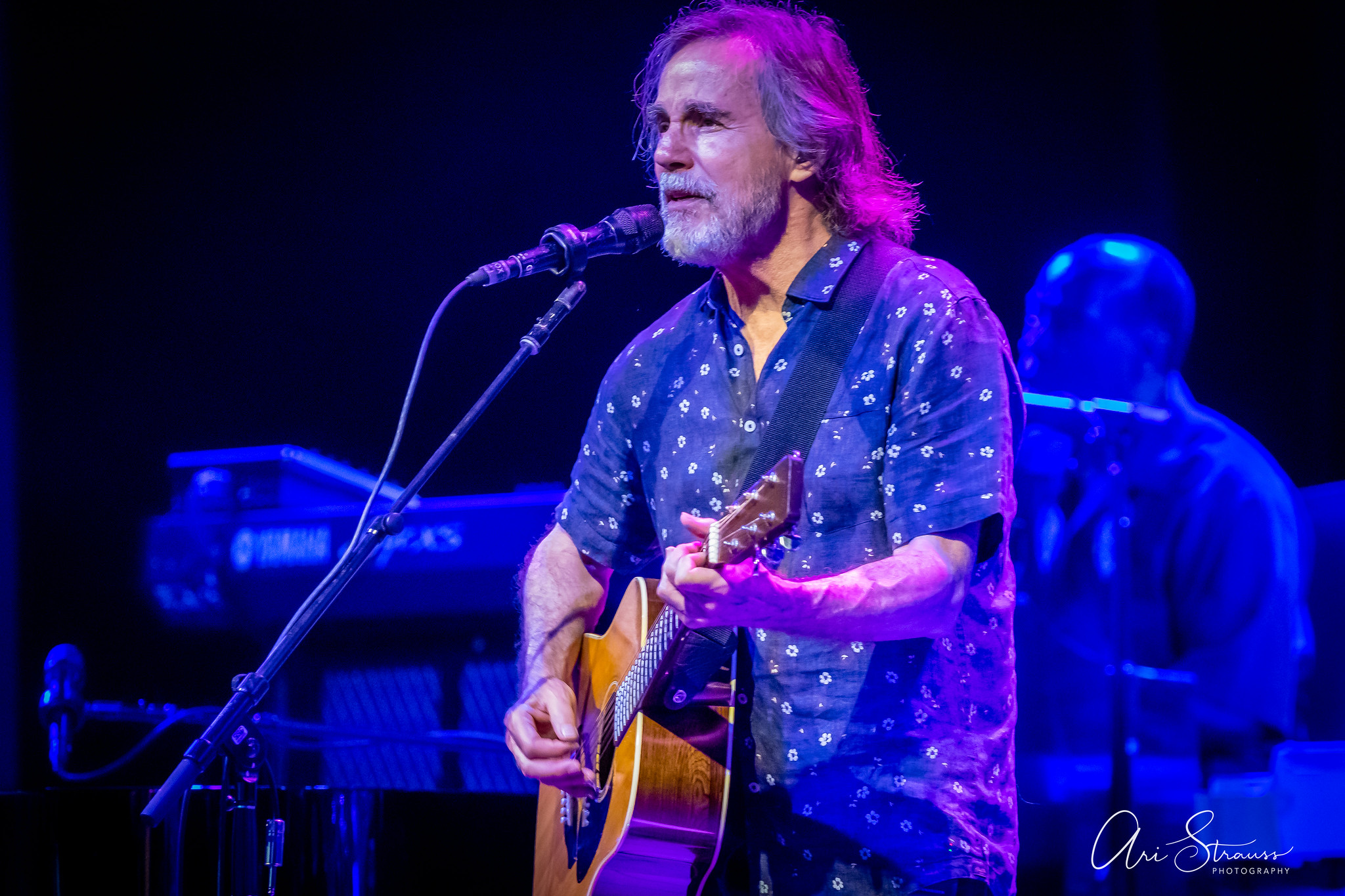 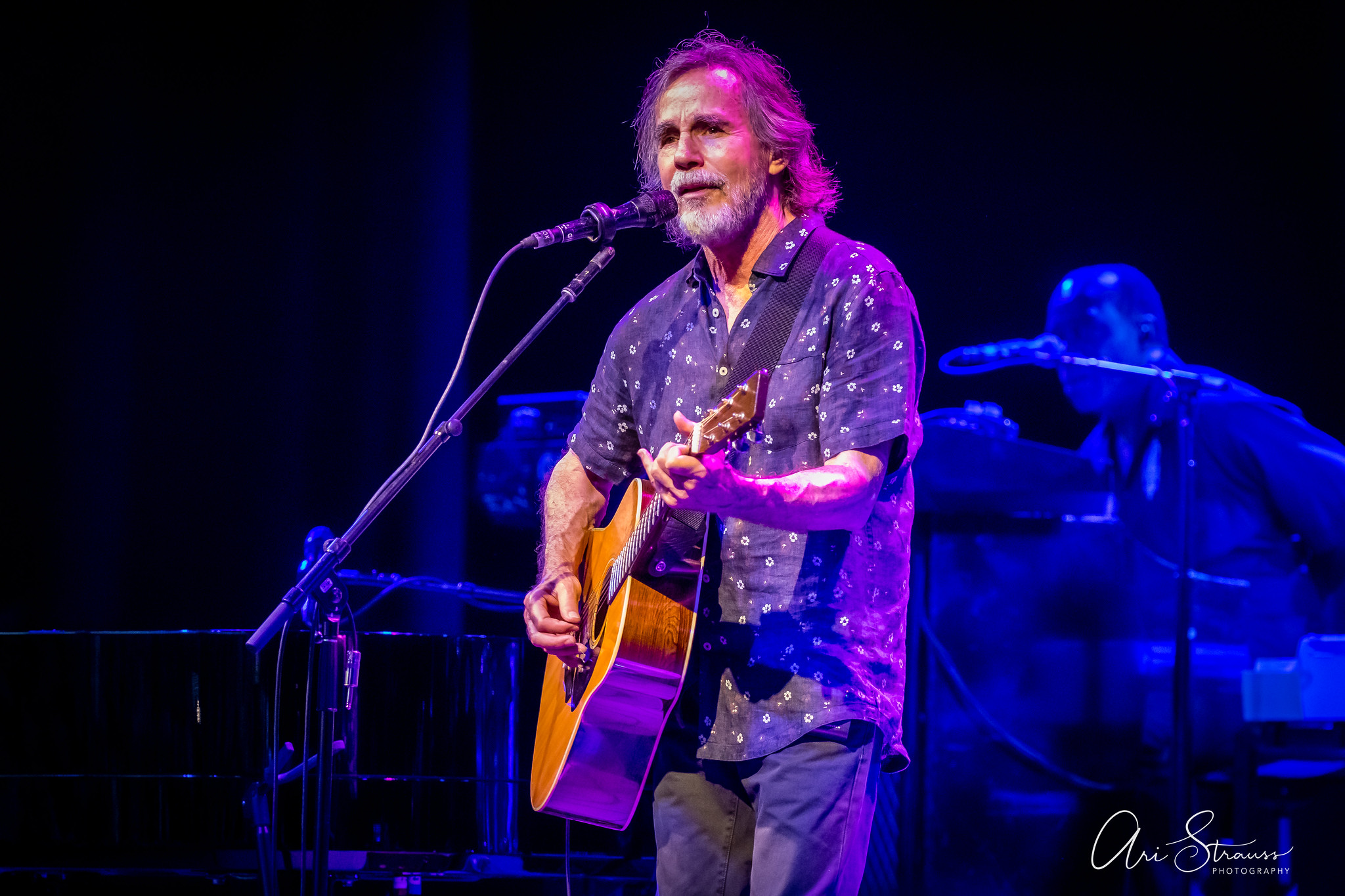 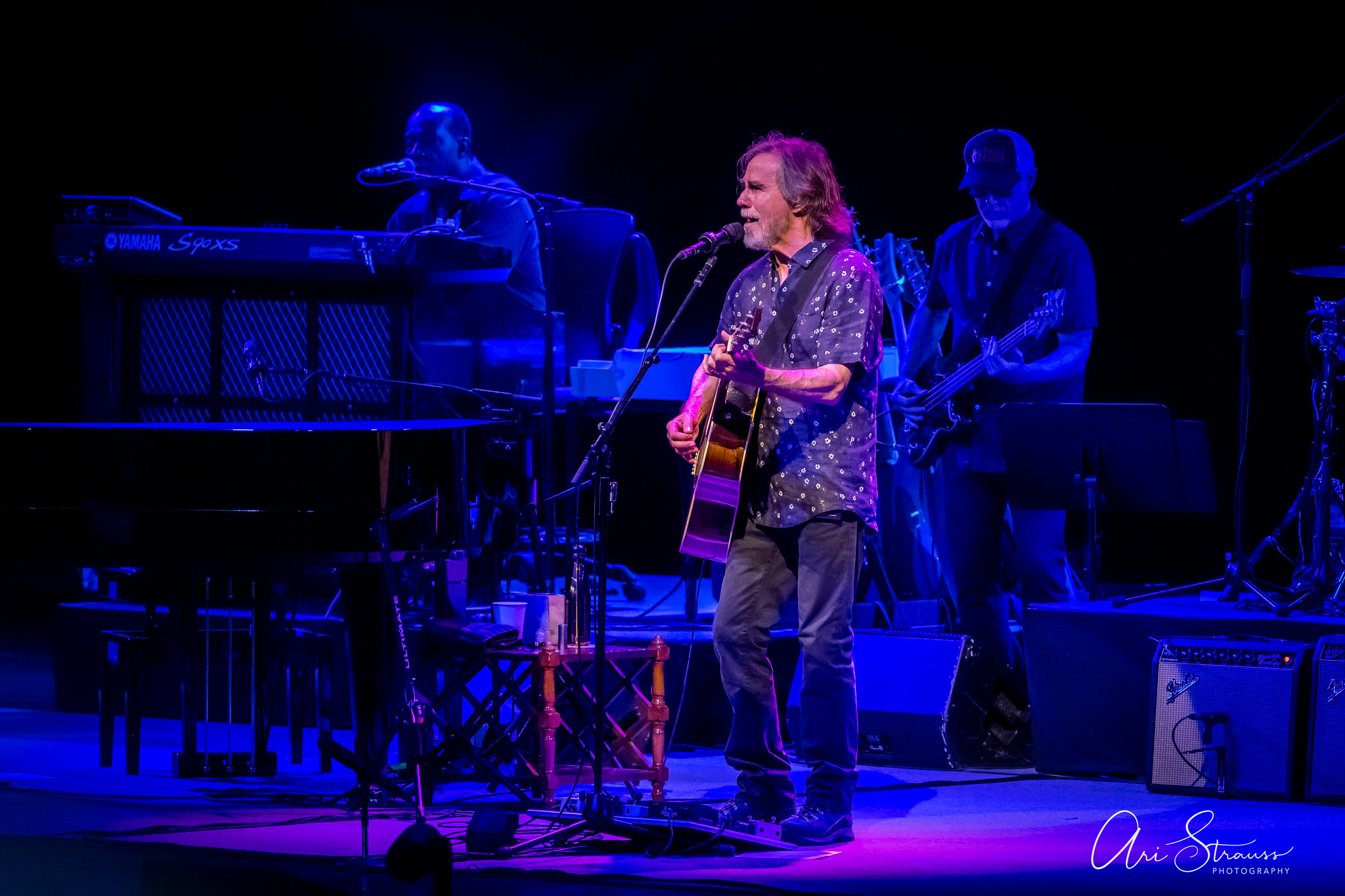 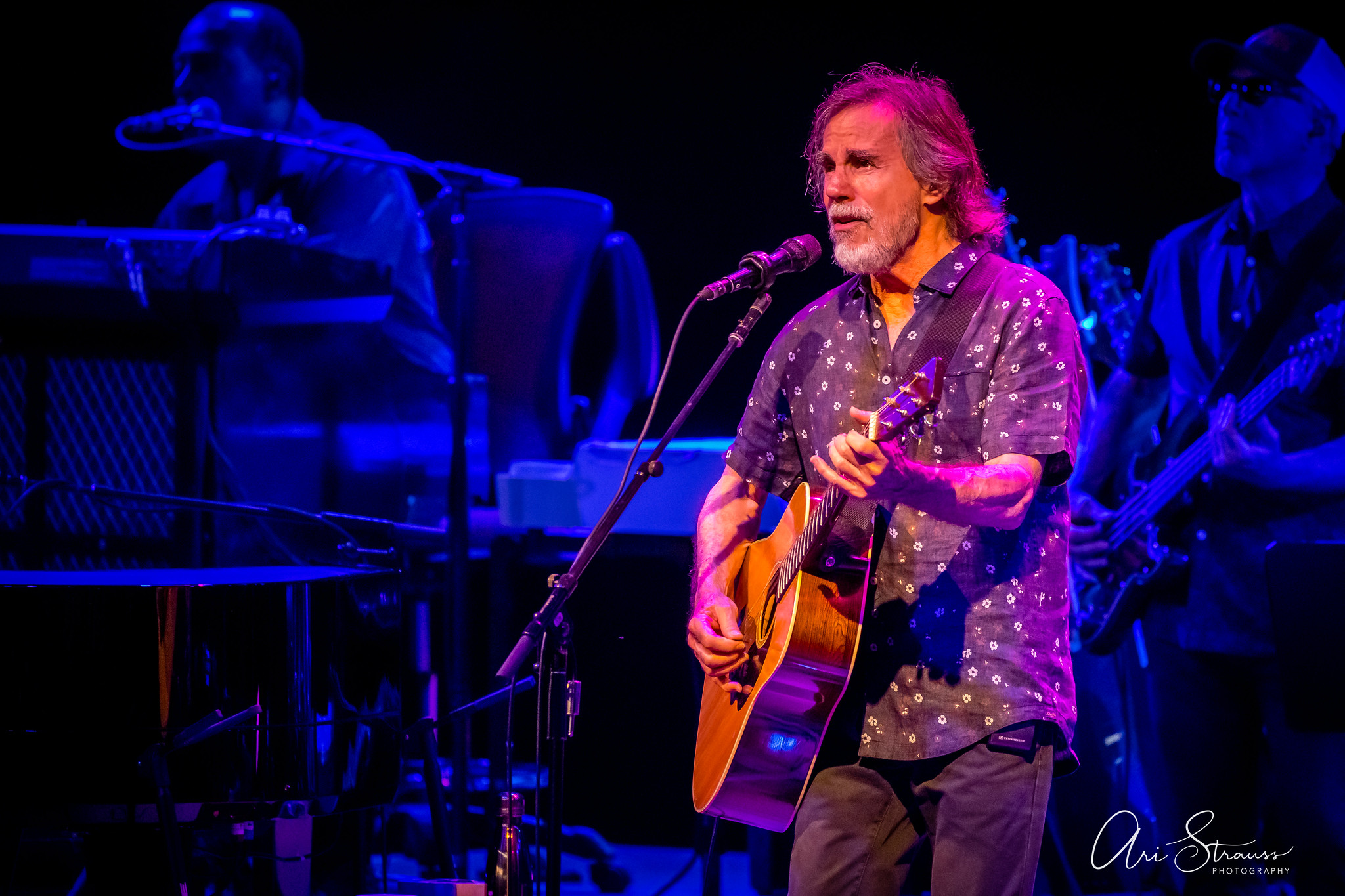 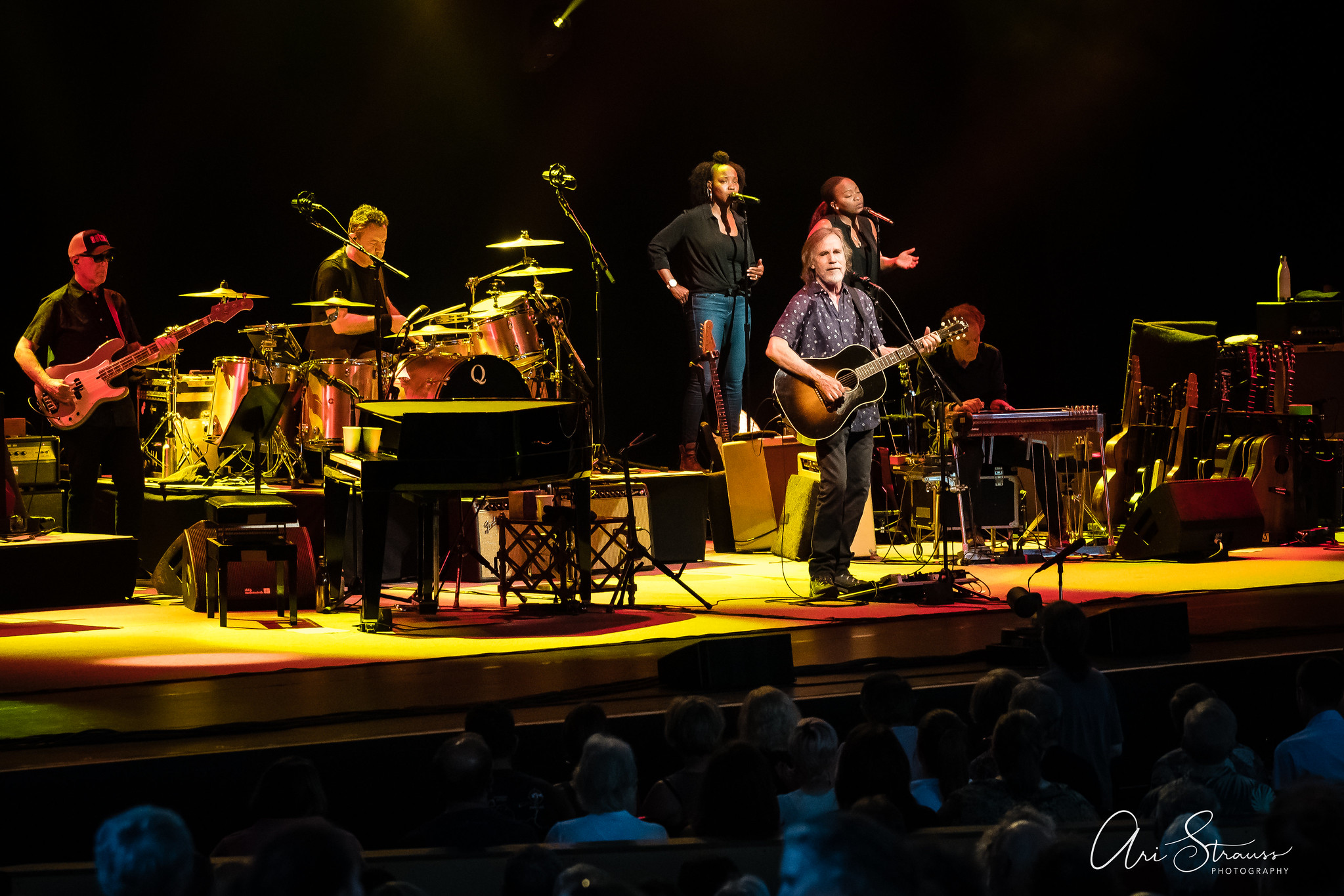 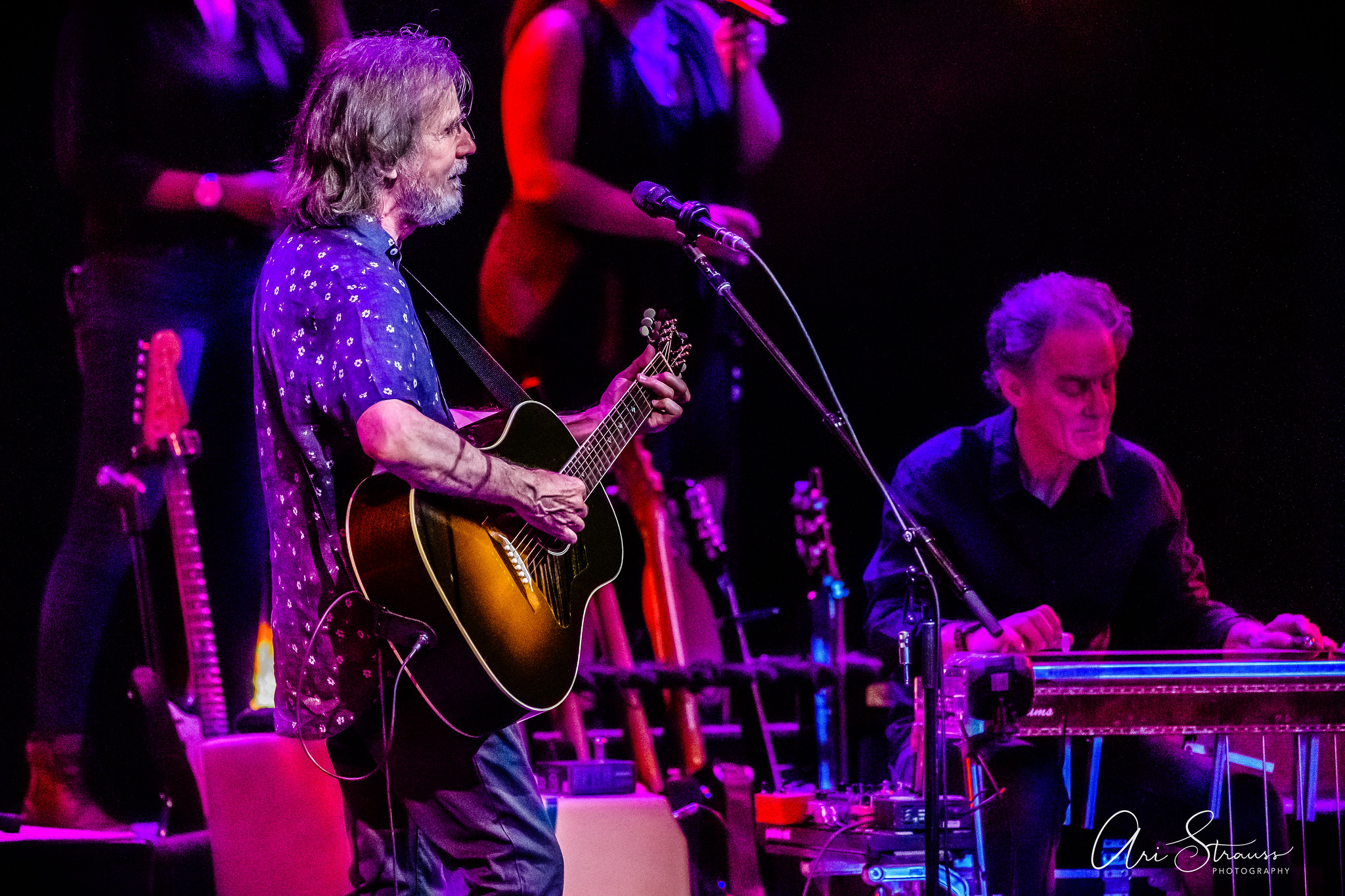 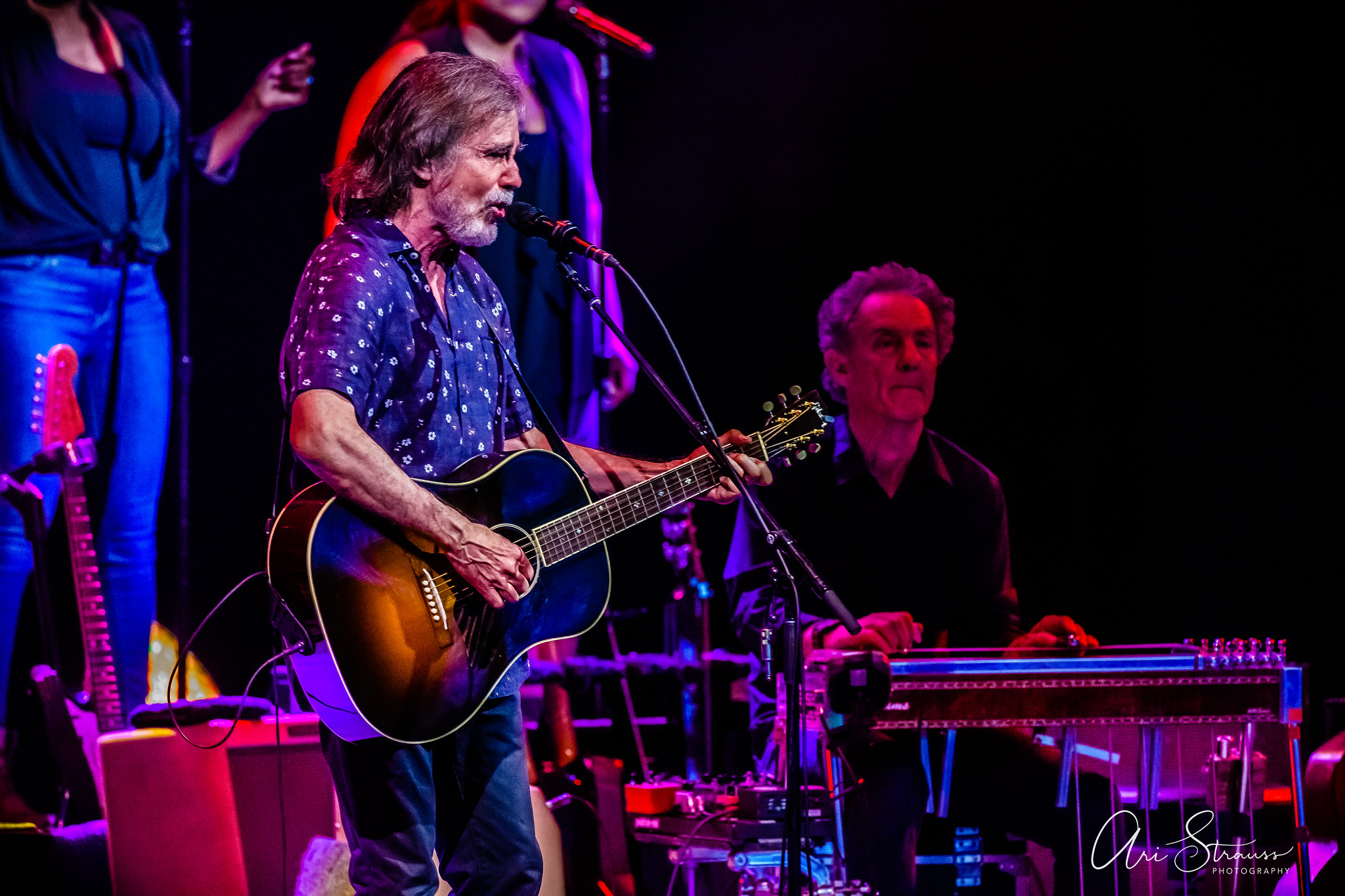 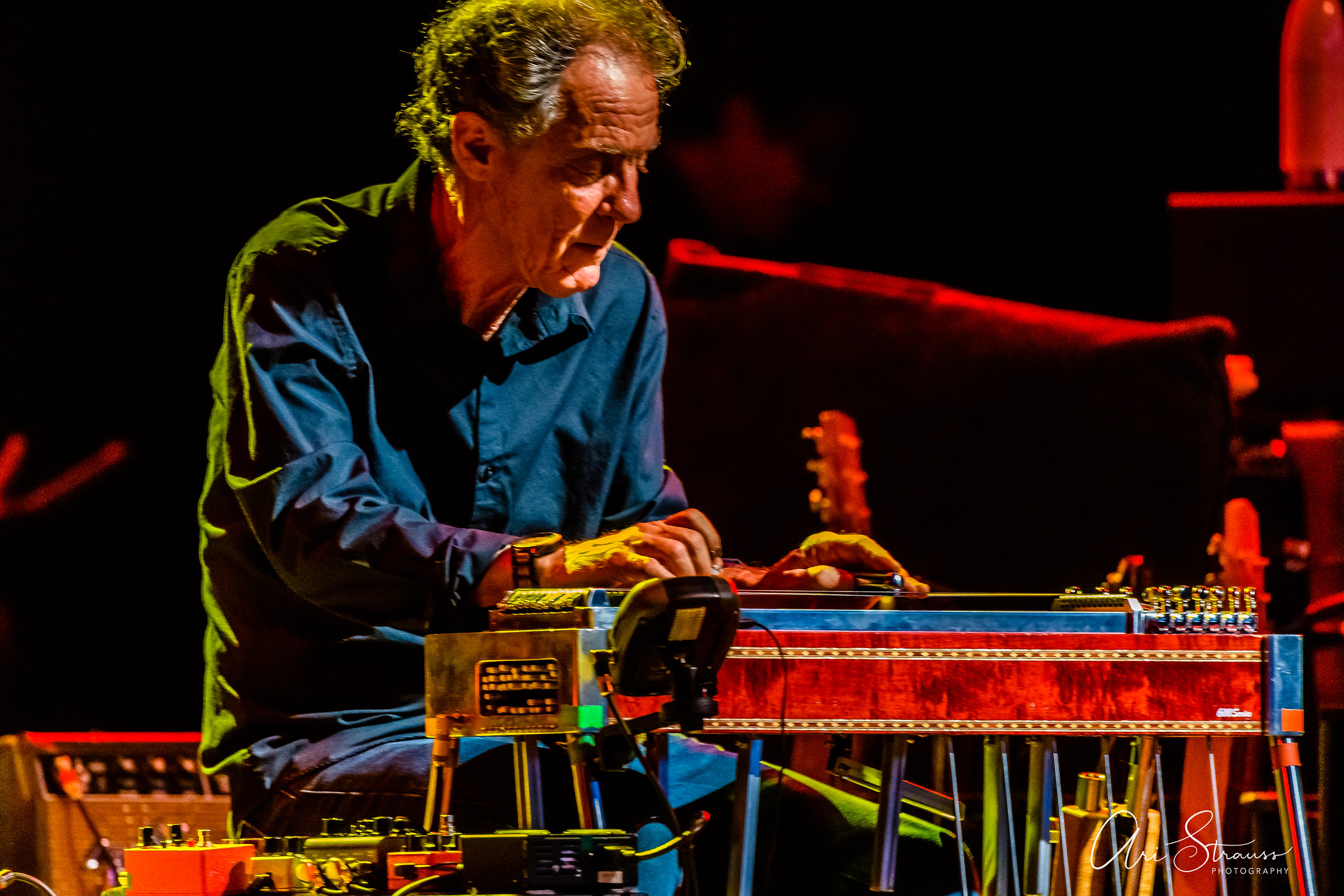 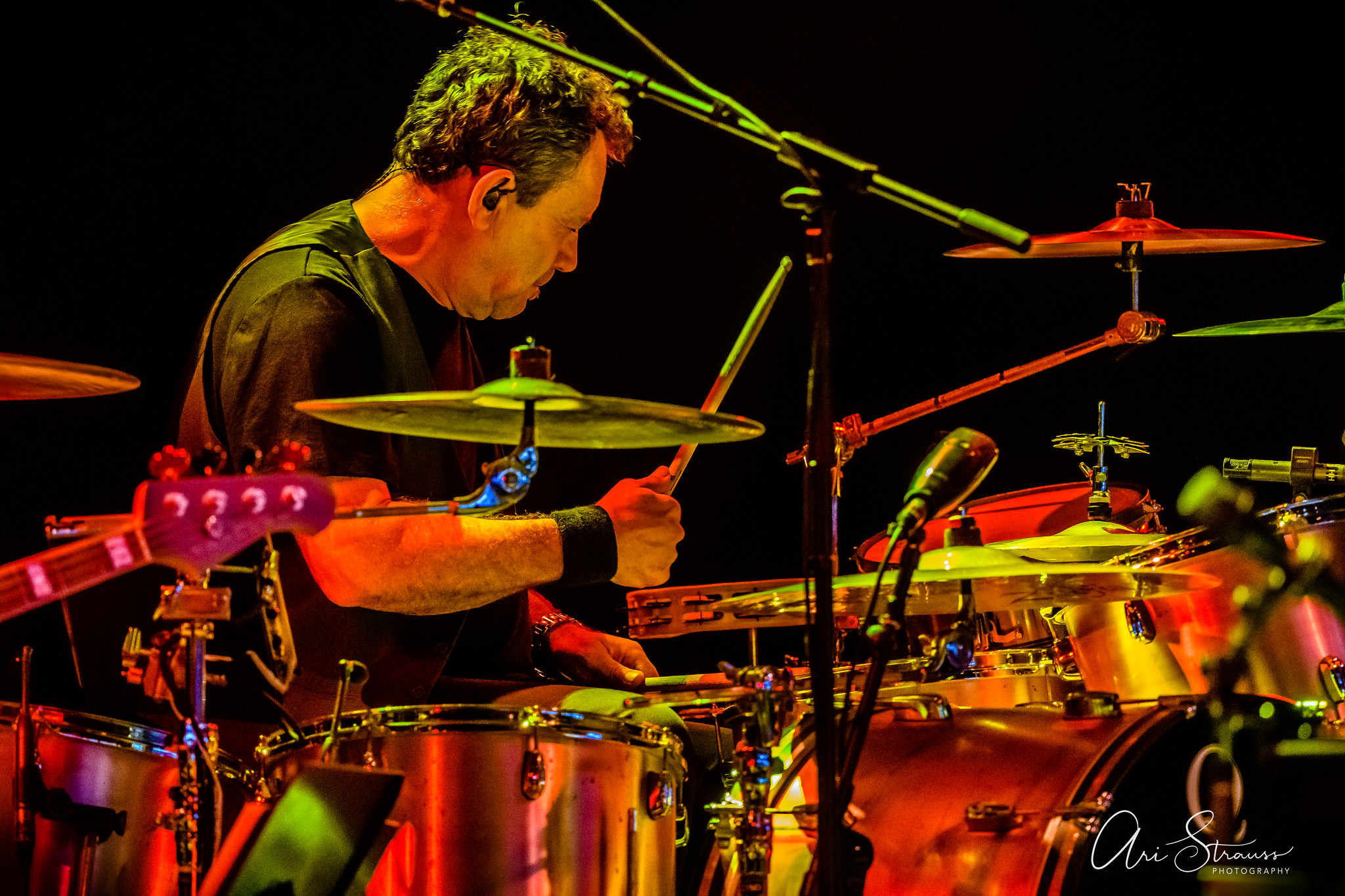 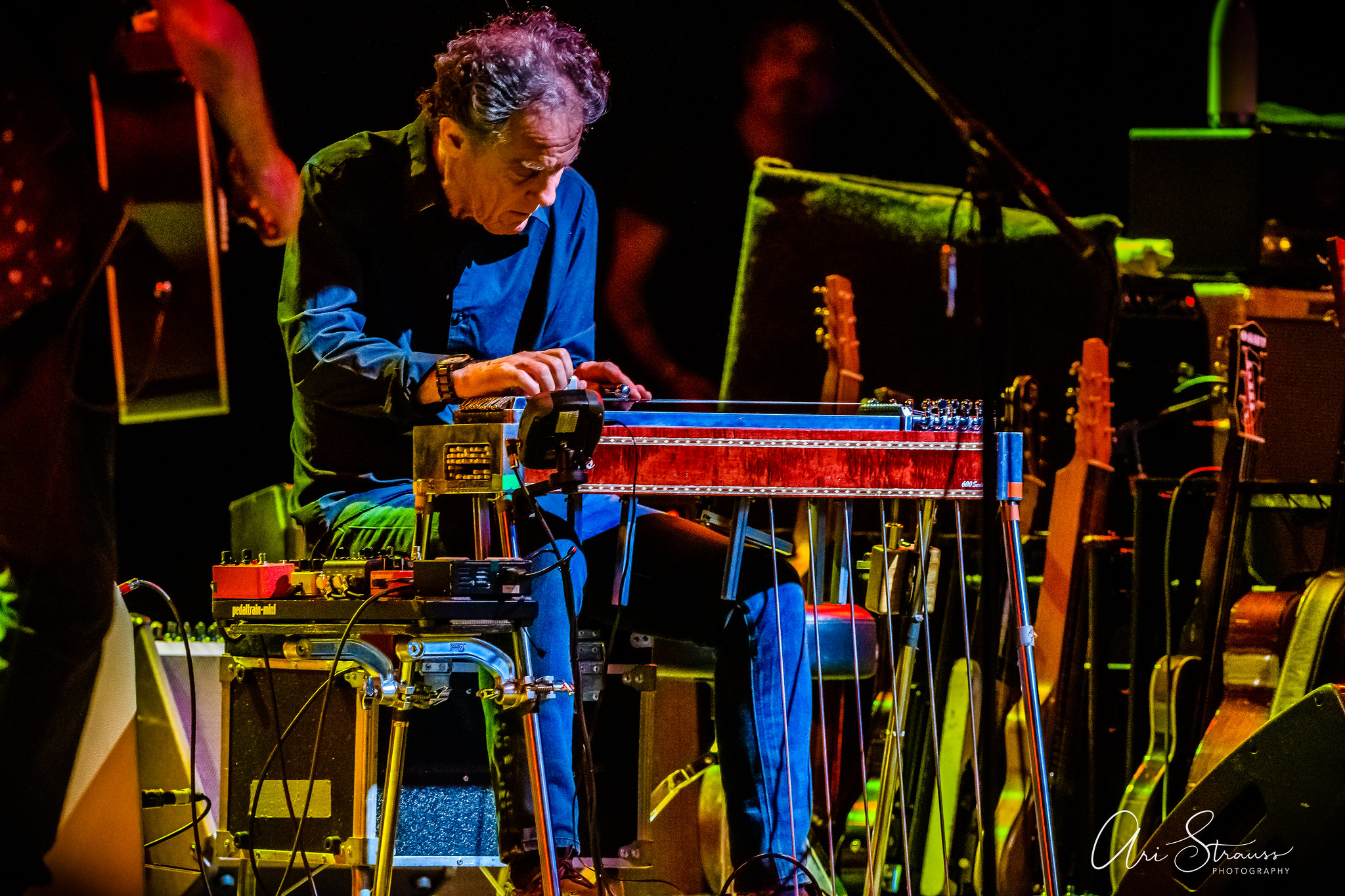 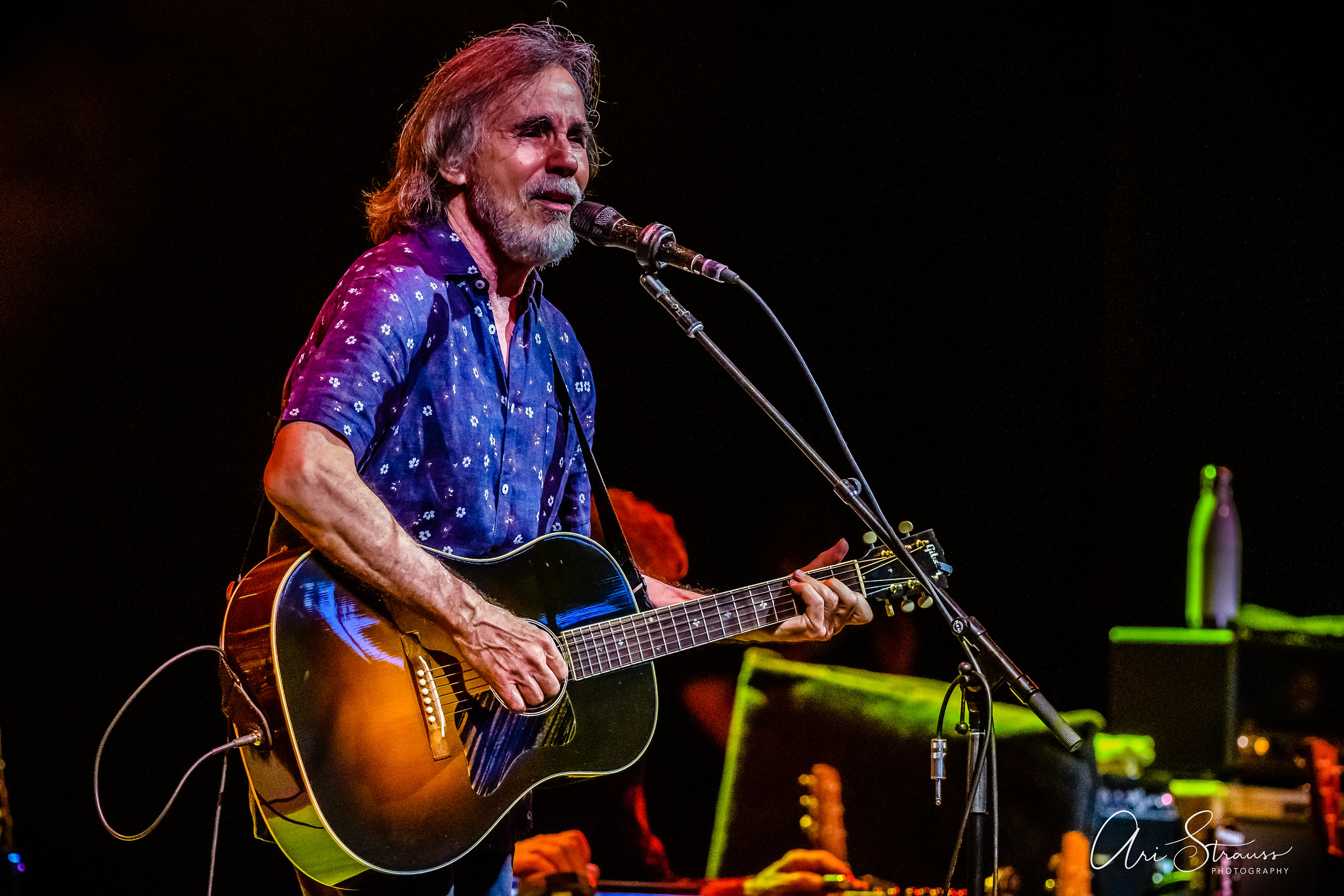 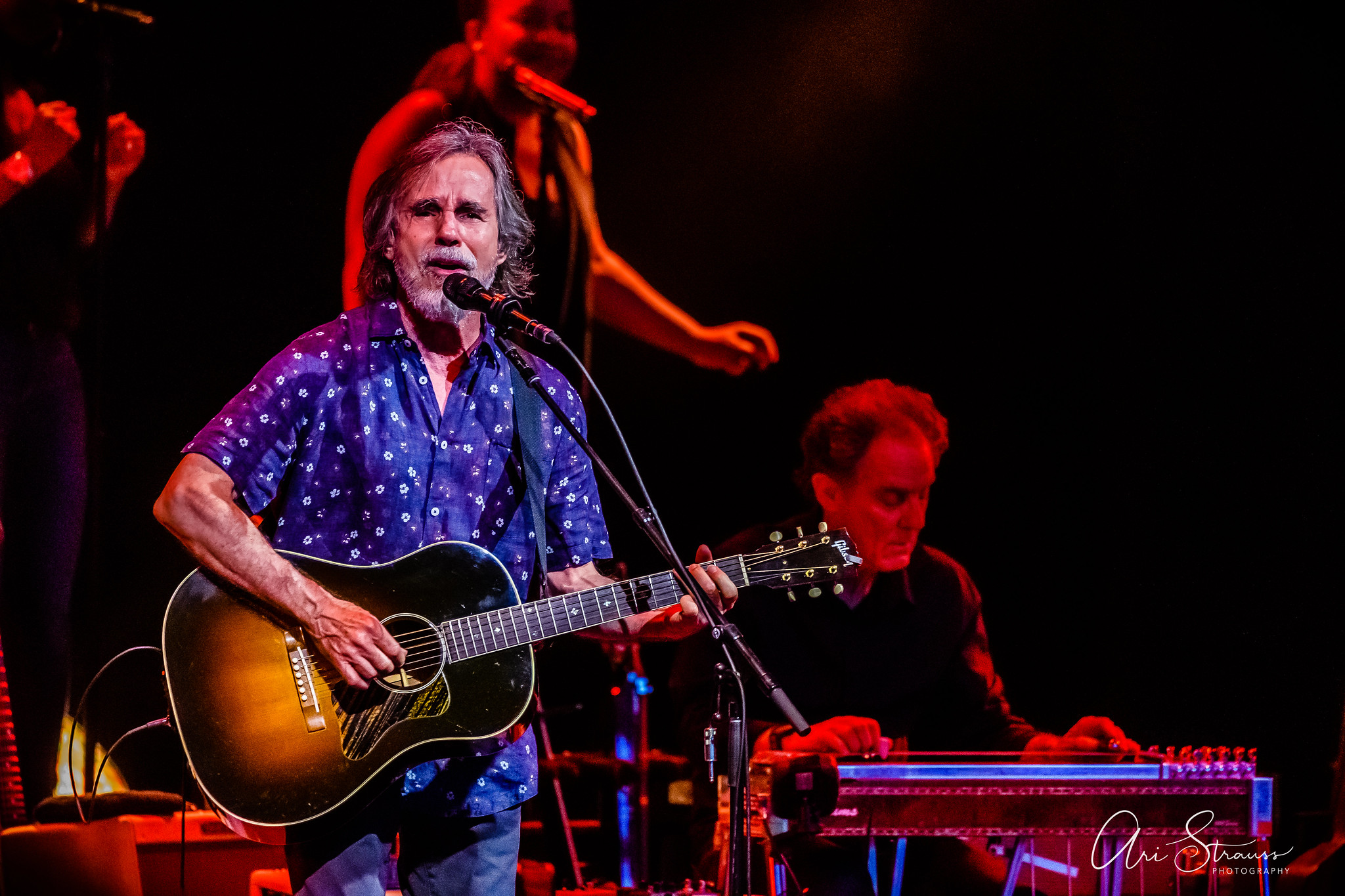