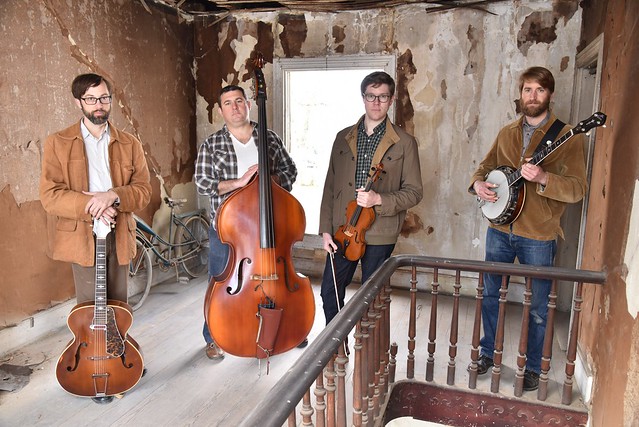 The High and Wides (Photo by Walter Bowie)

The High and Wides, a tight, talented bluegrass quartet from the Eastern Shore of Maryland, killed it at Hill Country in DC recently.

Consisting of Marc Dykeman (guitar, vocals), Sam Guthridge (banjo, mandolin, vocals), Nate Grower (fiddle), and Mike Buccino (bass), The High and Wides formed in 2015. They draw their name from large-haul trains, and their bouncing rhythms and mountain melodies are just as forceful.

Proving that, they opened with a cover of a 1956 rockabilly tune, “Lonesome Train on a Lonesome Track,” on June 29. The band completely rocked out here, and Marc’s vocals were more of a low, full-throated growl than a high lonesome sound. They may have used backbeat patterns emphasized in rock and blues, as opposed to the offbeat patterns emphasized in bluegrass, on this song.

Next, the band played “Oh Caroline,” which they described as “a good old song about drug mules.” They followed that with an instrumental. Displaying a biting wit, Marc described “Dark Blues” as “off our best album.” (They have just one album: Lifted.)

Stream Lifted by The High and Wides on Spotify:

The High and Wides exhibited that same wit when they talked about their native DC metro region. “None of us can afford to live here now,” they said. “But it’s a great place to be from.”

Sam sang lead on “Idaho,” a song that might be on the band’s next album. “Rake Out the Nails,” from Lifted, is a “classic about heartbreak and the proper way to handle it: with arson.” Marc said that the band has lots of songs “about interpersonal conflict and the wrong way to handle. It ties us to the traditions of country music.”

The band played the great bluesman Lead Belly’s “When I Was a Cowboy.” This very song was mentioned the next day at Dom Flemons’s concert, cited as an example of the holdings in the Folklife Archives at the Library of Congress.

During the bright, shiny “World Comes Alive,” Marc had a problem with one of his guitar strings. (Is Hill Country cursed for vocalists playing acoustic guitar? Just two earlier, the same thing happened to Wayne Hancock!) He left the stage to tend to his guitar. Sam and Nate played an old banjo and fiddle tune that they used to do when they were in another band 10 years ago.

The appropriately-named “Yodel” featured the eponymous vocal call, as well as soloing that drew applause from the crowd. It was just another trick in their bag. Altogether, The High and Wides played more than 20 songs — songs from their album, new songs, and covers.

The High and Wides not only played straight-up bluegrass; they exploited the audiences’ expectations of a bluegrass band, using their string band instrumentation to emulate other genres of music. This is an accomplished group of players, and their music is a hell of a lot of fun, even if you’re not a bluegrass devotee.