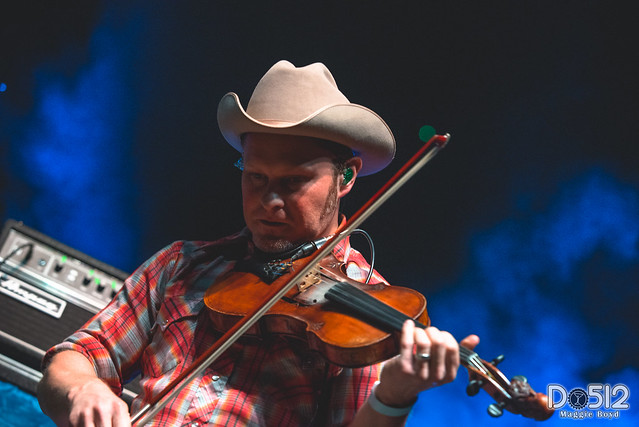 Powerhouse Americana sextet the Randy Rogers Band put on a Texas-sized spectacular recently at the 9:30 Club.

The band formed two neat rows of three at 9:30 Club on July 11. Guitarist and vocalist Geoffrey Hill stood to Randy’s right, clad in a light-blue button-up shirt, black jeans, and a trucker hat. Fiddler Brady Black occupied the space stage left, his dark blue shirt tucked into his light-blue jeans, and a black cowboy hat to top off the ensemble.

Behind Brady was bass player Johnny Chops, wearing a dark blue western shirt and black jeans. Drummer Les Lawless sat at the kit in the center of the back row, his black t-shirt visible. Hidden behind the piano in the back left corner of the stage, only Todd Stewart’s face and trucker hat could be seen.

The band opened with “Buy Myself a Chance” from its eponymous 2008 album. Brady and Geoffrey crossed the stage in front of Randy, briefly switching places, before returning to their original positions. The boys went straight into “Tonight’s Not the Night,” a love song. Randy motioned to Brady, who stepped to the front of the stage, wailing away on his instrument.

Randy told the audience that they got into DC at 3:30 in the morning, and he got about in an hour of sleep. He said he’d been thinking about the two craziest people he knew. Yellow lights lit the stage as the band began playing “Crazy People,” turning to purple part way through the song, a selection from Randy Rogers Band’s most recent album, Hellbent.

Hitting on the subject of the weather, the band played “Flash Flood” and “Damn the Rain,” followed by “a drinking song” called “Drinking Money.” Randy marveled about the next song, “One More Goodbye,” “If you would’ve told me that I’d be playing this song in 40 states, every night of the month” and that “people would be dancing and making out to it,” he would have felt grateful for his good fortune.

The announcement of Russell Westbrook’s trade from the Oklahoma City Thunder to the Houston Rockets broke only minutes before the band took the stage, and they hadn’t heard. Randy dedicated “Down and Out” to Russ, who had lost his superstar Paul George to the Los Angeles Clippers, and was facing a long rebuild.

“When the Circus Leaves Town” led into “Speak of the Devil,” which Randy sang “for anybody whose ex is here tonight” or for “someone you just don’t like” or are “pretending not to like.” He wrote “Tequila Eyes” with Dean Dillon, who composed several #1 hits for George Strait; he sent a shout-out to Hank’s Oysters.

The crowd clapped along to the beginning of “I’ll Never Get Over You.” Randy said, “They don’t play this on country music radio. That’s okay, though.” He dedicated the next song, “Interstate,” to his mom and dad, who’ve been married for over 40 years. “It’s about the town I grew up in,” he said, “and the town you grew up in.” He added, “My brother’s a doctor. I just sing in a band.”

Randy called “Anchors Anchors” his favorite song on Hellbent. After “taking it deep tonight” with “Fuzzy,” the band got to the album’s signature, “Hellbent On a Heartache.” The song is a cover, and was written by Guy Clark and Chris and Morgane Stapleton — while Chris’s name is more widely known, Morgane is a talented songwriter.

In San Antonio, Randy sang about “the home of the best tacos and the best margaritas.” After a couple more songs, the disco ball came down, and the band finished their set with “Kiss Me Goodbye.”

Amidst thunderous from the packed house, the band left stage with instruments in hand, clearly planning to come back. And return they did, to play “2000 Miles.”

It was a great night, with a great band, playing great songs.