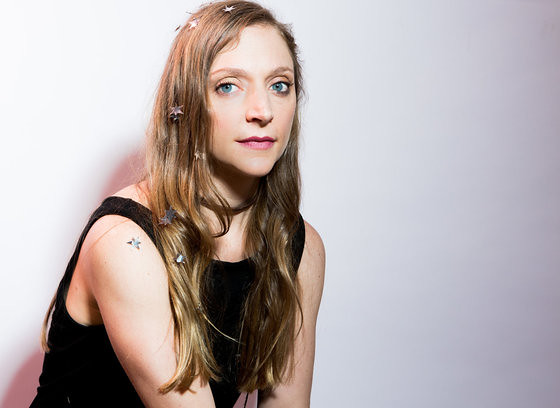 Eilen (pronounced ee-len) Jewell’s appearance with her band at Mason District Park on Friday evening was a family affair. Her husband, Jason, plays drums and provides backing vocals. Their darling five-year-old daughter Mavis frolicked amidst the greenery and even joined in the music-making.

The band all wore matching black ensembles. The bassist bared his bald head, while the guitarist’s silver-gray hair emerged from a black cowboy hat. Eilen wore a black dress cut to the shoulder, revealing the small tattoos on her forearms.

One of Eilen’s biggest influences is classic blues. She began her July 11 show with a cover of Charles Sheffield’s 1961 cut, “It’s Your Voodoo Working.” Eilen also sang covers of Big Maybelle’s “Don’t Leave Poor Me” and Willie’s “You’ll Be Mine.”

After “Voodoo,” Eilen told that audience that she and her band had been looking forward to this performance “for a year, almost to the day.” Strapping on her acoustic guitar, Eilen described “Rain Rolling” as a song about “appreciating the little things in life.” Moving on to the next song, Eilen declared, “Here’s a honky-tonk number, happy Friday night!” and played “Heartbreak Boulevard.”

Eilen talked about her new album, Gypsy, which comes out Aug. 16. The album contains 11 originals and 1 cover of a fellow Boise artist, country traditionalist Pinto Bennett. Pinto, she said, is getting up in years and has health problems. Jason recently produced what Pinto is calling his final album, Last Saturday Night, and she and her band contributed to several of the tracks. She sang the cover from the album, “You Cared Enough to Lie.”

“A happy summertime song,” titled “Too Hot to Sleep,” was up next. Eilen quipped that it “wouldn’t be an Eilen Jewell song without complaining.” Referencing the heat, she said that the audience might now regret those winter nights when we couldn’t wait for summer to arrive. By the end of the evening, though, the fireflies would make an appearance, and she would remember why she loves it here.

Eilen added harmonica to her accoutrements for “Santa Fe,” a tune from her album Queen of the Minor Key. The next song, “Rio Grande,” she said, “takes place in the same part of the world.”

After a couple of blues covers, Eilen and her band moved on to previewing the material from the new album, Gypsy. They began with “Working Hard for Your Love,” a hard-chugging, bluesy number. Eilen switched to electric guitar for the “Where They Never Say Your Name” and “Miles to Go,” going back to acoustic for “Crawl.”

For the signature song from the new album, “Gypsy,” Eilen asked her daughter Mavis if she wanted to shake a shaker. Mavis came up to the stage and said, “Hi, everyone!” Eilen told the audience that Mavis means “songbird,” and that “Gypsy” was written for her.

Moving on, Eilen said Mavis “especially loves this one,” Bessie Smith’s “Down-Hearted Blues,” the title track of her last album, a collection of classic blues covers. Bessie, she told the audience, has gotten her through some hard times. She asked Jason to come up to the front of the stage to play the washboard, and she held Mavis as she beautifully delivered the song.

The sky heavily blotted out with darkness, Eilen and her band added a bonus tune, one of her favorite Flatt and Scruggs songs, “Head Over Heels,” making for a perfect ending to a night of beautiful music. Eilen and her band delved into country, blues, and more, mixing diverse influences into songs that emphasized tradition while creating something bold and new.

Mark your calendars for Aug. 16: her new album, Gypsy, promises to be terrific! In the meantime, don’t you miss her if you can catch her on tour!