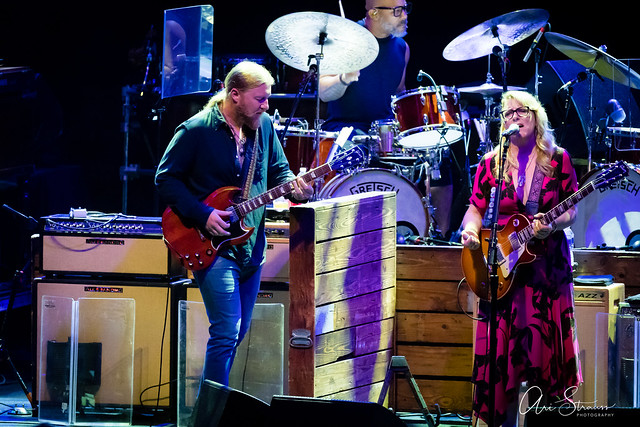 The Tedeschi Trucks Band had a stroke of good luck in the form of an early evening thunderstorm recently. The pouring rain cooled down what was a sweltering hot day, making the atmosphere at Wolf Trap for their performance decidedly comfortable.

On July 17, TTB headlined their annual Wheels of Soul Tour, also featuring Shovels & Rope and Blackberry Smoke, at the Filene Center. Parklife photographer Ari Strauss described the tour as a “mini [Eric Clapton’s] Crossroads festival.” One major point of analogy is the virtuosity of Derek Trucks, lead guitarist of TTB. Ranked by Rolling Stone as one of the top 20 guitarists, the former members of the Allman Brothers Band is possibly the best currently active.

The Tedeschi Trucks Band is a jam band that plays a mixture of contemporary blues and blues rock, soul, and Americana. In my interview with band co-leader Susan Tedeschi earlier this year, she said that, despite winning a Grammy for Best Contemporary Blues Album, she doesn’t consider TTB a blues band. The blues definitely informs their music, though, which is quite wide-ranging.

An unobtrusive moment at the end of “Shame” spoke to TTB’s range and brilliance. As Derek brought down the intensity his of solo, he made an effortless switch to an Indian style of music. He showed excellent taste in playing this softly, like a chef perfectly spicing a dish. It’s an analogy that TTB once used, when Derek and Susan called themselves a “Soul Stew,” and they are still delicious.

TTB opened with “Anyhow,” followed by their first cover of the evening, a jammed out version of the Elton John deep cut “Border Song.” After “Still Your Mind,” Susan picked up her guitar and played rhythm on “Signs, High Times” the signature song from the band’s latest album, released this past February. She took a drink of water to refresh her voice between songs, and the band continued with “Until You Remember.”

Susan strapped her guitar on again for Derek and the Dominos’ “Anyday.” Vocalist Mike Mattison made his way to the front of the stage, where he provided a second lead vocal. The lights flashed on during the long instrumental intro, followed by a sax solo that drew applause. The crowd applauded even more for heavily for Derek’s crushing electric guitar solo, which closed the song. He is one of the few could plausibly hope to fill Clapton’s shoes.

Only Mike sang vocals on “Life Is Crazy,” which was fitting, as it’s his song. The band’s new keyboardist, who replaced the late Kofi Burbridge, sang lead on “Life Is Crazy.” (Kofi passed away on Feb. 15, on the afternoon of the first of TTB’s four appearances at DC’s Warner Theatre that month.) Elizabeth Lea, one of three band members who joined in 2015, contributed a hearty trombone solo.

Susan put down her guitar and belted out “Shame.” Recalling Derek’s earlier days, TTB covered the Allman Brothers Band “Don’t Keep Me Wondering.” The soulful “Midnight in Harlem” filled out the penultimate slot.

Susan armed herself with her axe, and TTB welcomed Blackberry Smoke frontman Charlie Starr to the stage. Together, they closed their set with a cover of Charles Segar’s “Key to the Highway.” The audience rewarded TTB’s bravura performance with a standing ovation, and they returned to play a Billy Taylor song, “I Wish I Knew (How It Felt to Be Free).”

It’s hard to imagine a much better night with much better music. Wolf Trap is a serene venue, and it would be hard not to find a measure of peace there when you’re listening to the blissful improvisation of TTB. They have great technical skills and fundamentals as musicians, but they’re also creative, tasteful, and well-traveled musical explorers.

TTB deserves the accolades and awards they’ve received for their albums. They write terrific songs, have excellent production, and can perform in that structured environment. As good as their albums are, though, TTB shines brightest in live performance. Their performance, which ran close to two hours, included just a dozen songs. It’s very different animal from the albums, and a majestic one at that.

Here are some pictures of Tedeschi Trucks Band performing at Wolf Trap on July 17, 2019. All photos copyright and courtesy of Ari Strauss. 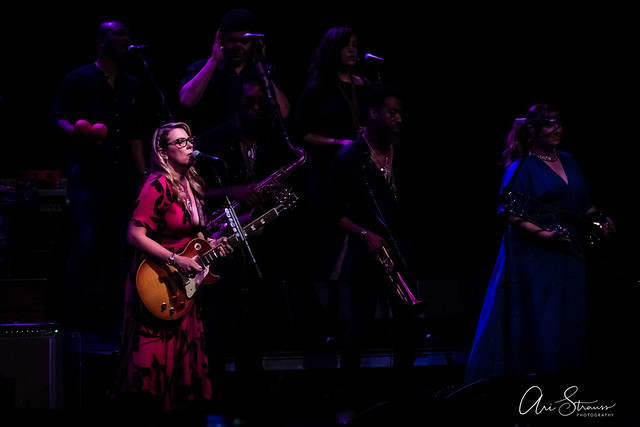 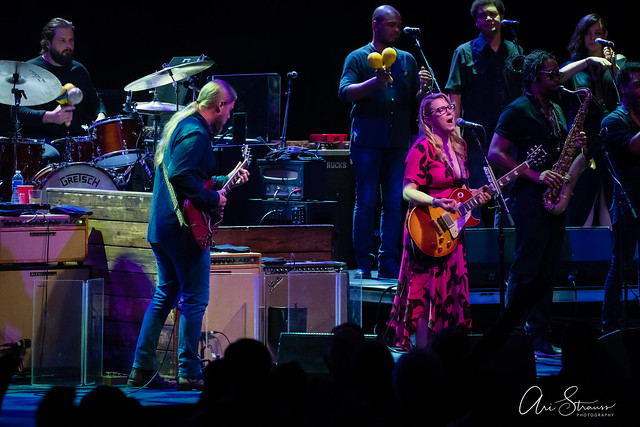 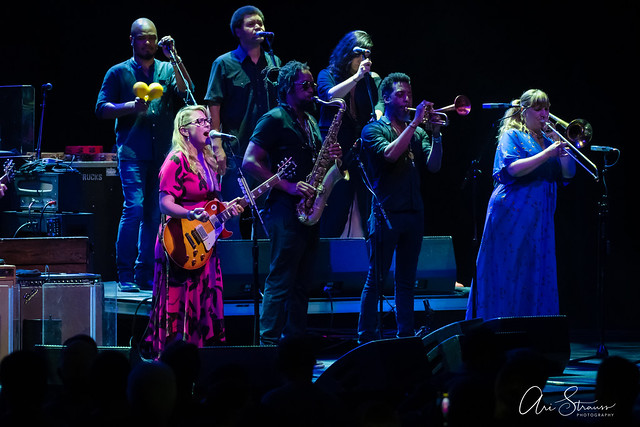 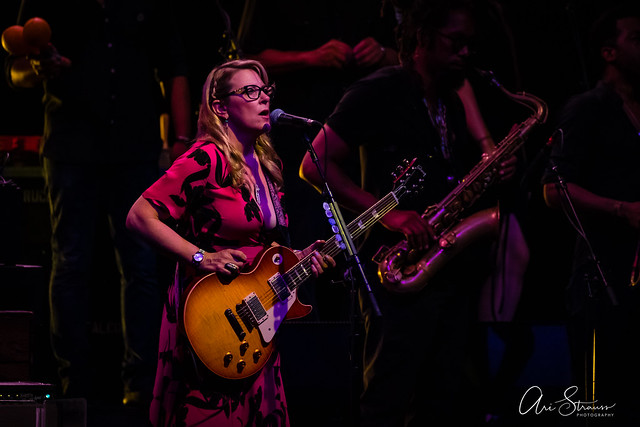 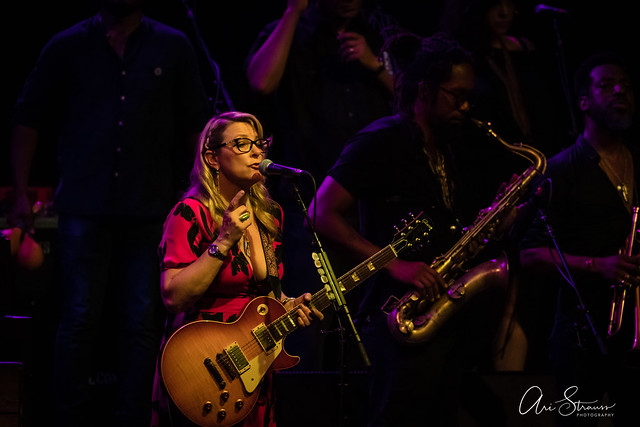 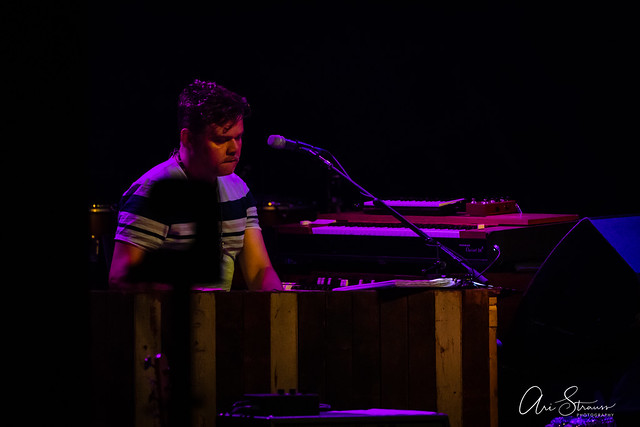 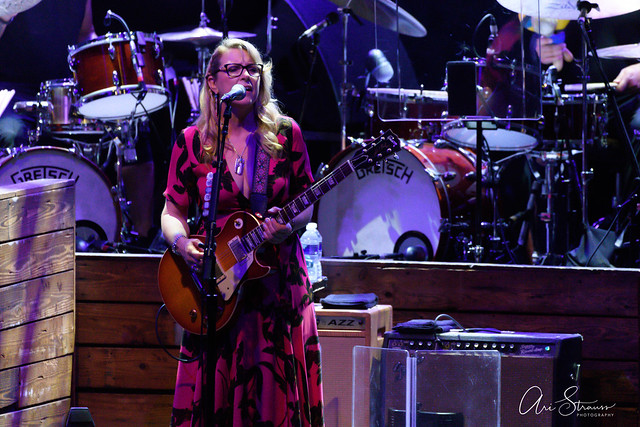 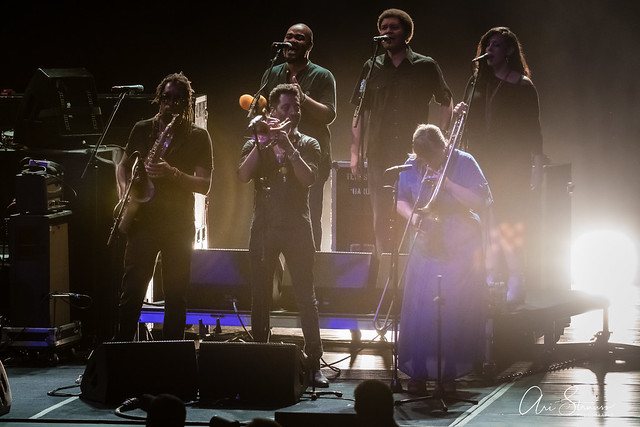 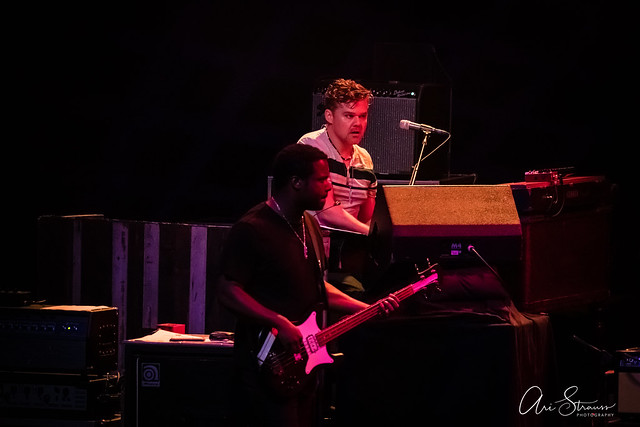 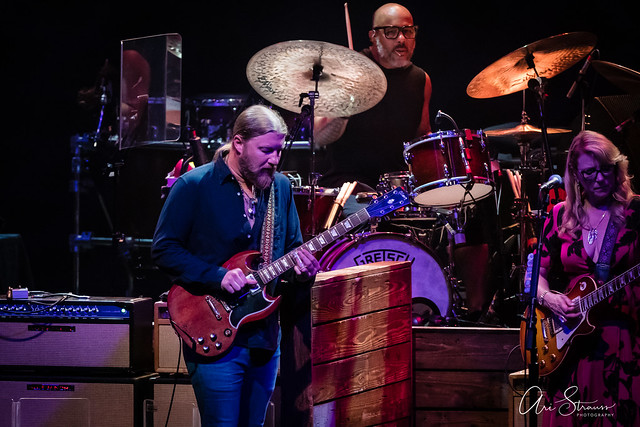 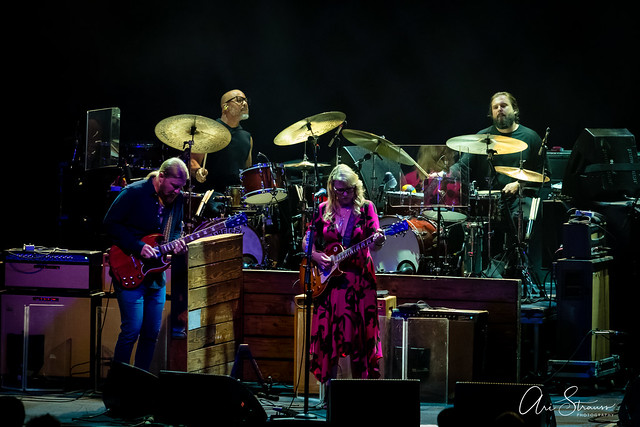 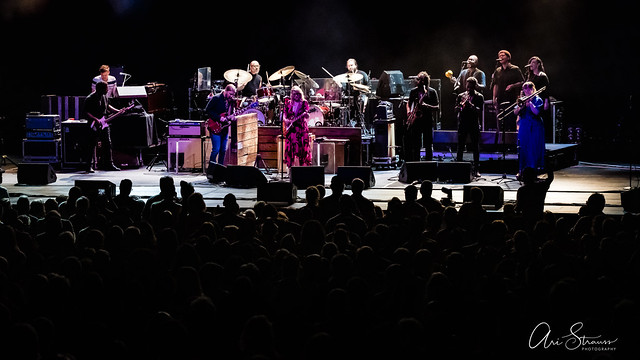 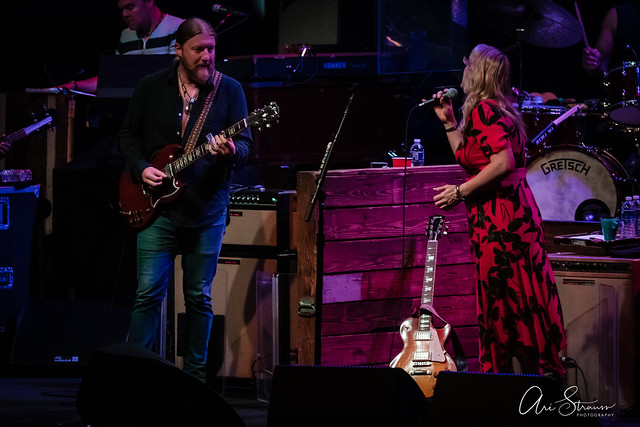 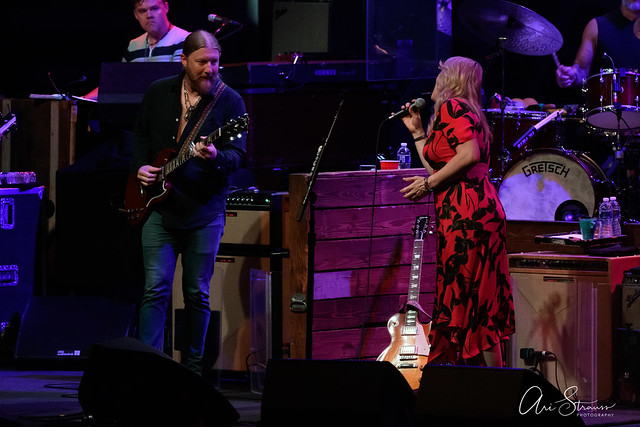 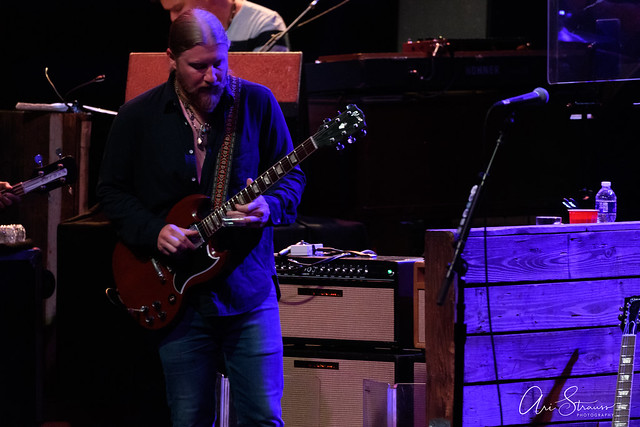 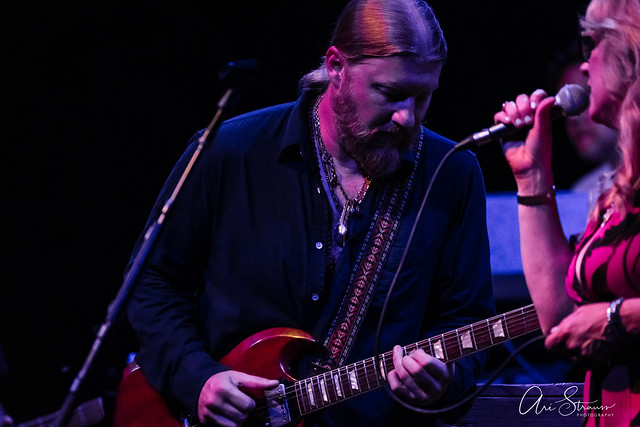 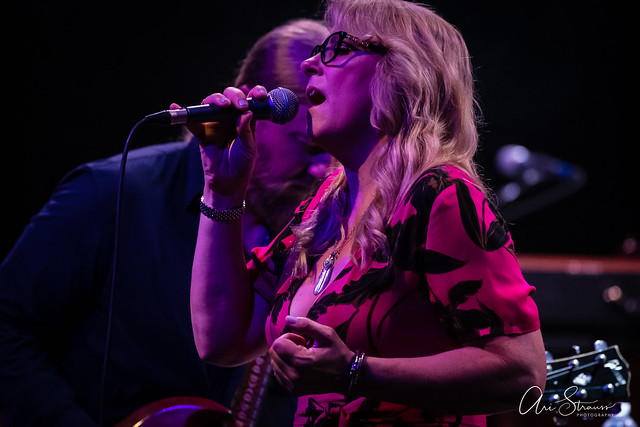 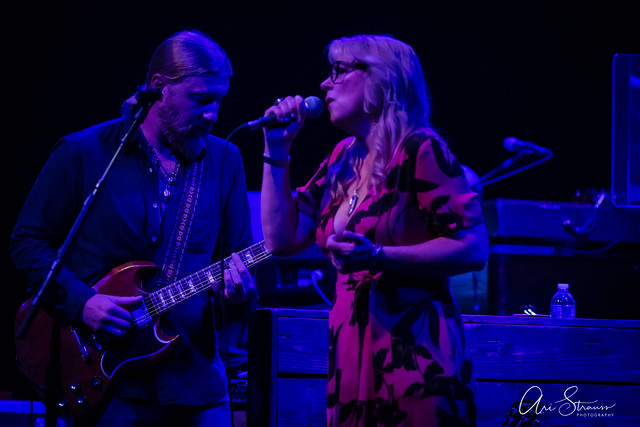 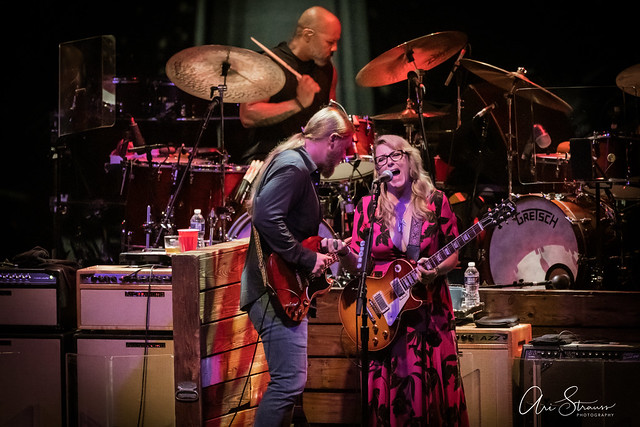