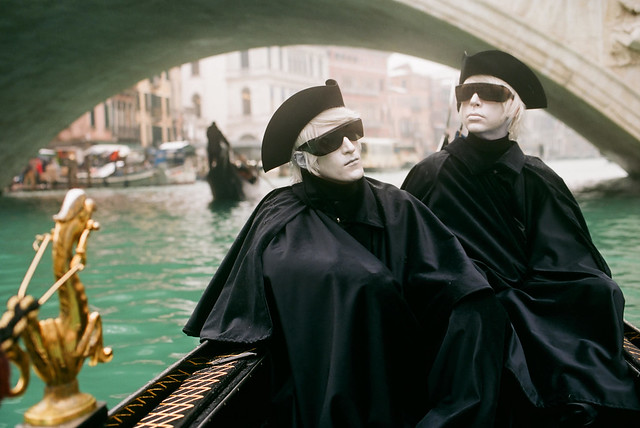 Of the song, Mona D said, “The music was written on a demo rig by Deb while in the backstage of a Warsaw venue waiting to soundcheck. We were on tour with Kaelan Mikla and they were soundchecking while Deb offered this 2-chord repetitive idea that he later expounded upon to create to music for the song. Lyrically the track points to the salad days of a relationship and it’s fleeting energy — The games that are played to maintain the magic. Oxytocin is this fleeting energy of the initial love bond — that seminal semi-permanent spark of enlightenment and obsession only to expire over the course of time and experience.”

Watch the official music video for “Oxytocin” by Drab Majesty on YouTube:

In a review for AllMusic, Matt Collar says Drab Majesty take cues from ’80s goth icons like Ministry and Bauhaus on the new record.

“However, rather than simply conjuring the work of their influences, Drab Majesty have crafted an album that works on its own merits, with songs that you may want to revisit just as much as your favorite vintage post-punk classic track. There’s also a nice emotional arc and flow to the album that speaks to the band’s theatrical nature as they recontextualize a kohl-eyed ’80s goth aesthetic for the next doom generation,” Matt said.