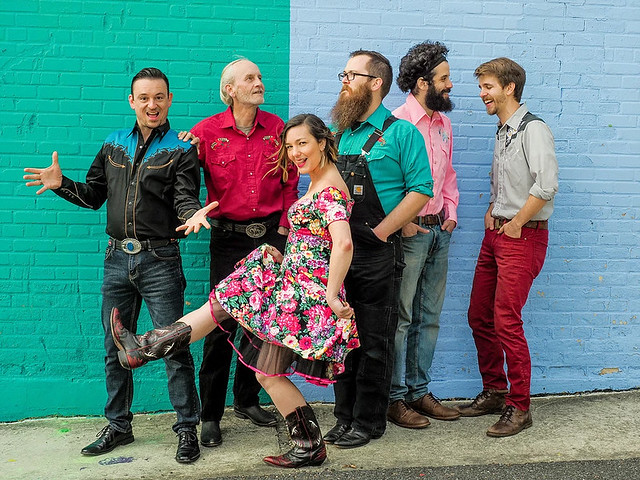 The Jacksons, as frontwoman Jess Eliot Myhre explained, began as a duo of herself and her husband Chris Owsley, traveling by bike from gig to gig. Jess, who hails from Florida, leads the bands on vocals, and she plays clarinet and the occasional bit of acoustic guitar. Chris, an impressively bearded Maryland native, also contributes lead vocals plays lead guitar. The rhythm section consists of bassist Alex Lacquement (also harmony vocals) and Dan Samuels on drums and percussion. The sextet is rounded out by pedal steel player Dave “Duckpin” Hadley and trumpet player Joseph Brotherton (also harmony vocals).

On Aug. 9 at City Winery, The Jacksons opened up with the mystical, jazzy “Many Paths to the Top of the Mountain.” Switching styles, all they did throughout the evening, they followed that with the minor-chord heavy “I Sing the Body.” “White Horse,” released with a video last summer, is the group’s most political song; otherwise, they stayed with mostly non-political material.

Next, the Jacksons played the title cut of their most recent studio LP, 2017’s I Never Met A Stranger. Jess said she’s been with Chris for eight years, and he’s become a great songwriter. I’m inclined to agree!

Stream I’ve Never Met a Stranger by The Bumper Jacksons on Spotify:

Chris switched to electric guitar, and the band played a country tune. Jess explained that she wrote the new, unreleased song, “These Things Will Come,” wrote during a period of conflict that she just wanted to get over with and get through. Alex introduced the next song, “Back in the Good Old Days,” written by John Hartford, who is most famous for “Gentle On My Mind.” He dedicated the song to his friend Eileen Carson Schatz, who taught John his style of flatfooting.

In the next number, Jess purred, “I’m a lover, I’m a fighter, I’m a full-grown woman.” For the penultimate number of their first set, the Jacksons played “Darlin Corey,” which they recorded on their first album, 2014’s Sweet Momma, Sweet Daddy, Come In. They finished their set with the swinging jazz standard, “Mama Don’t Want No Peas An’ Rice An’ Coconut Oil,” a Bahamian song made famous by Count Basie.

Returning from a 15-minute intermission, the Jacksons went right Woody Guthrie’s “Grand Coulee Dam.” Jess told the audience that the next tune was for the classic country fans, and, after she finished singing it, she mentioned the Patsy Cline tribute show she’s hosting at City Winery on Sept. 8.

Buy your tickets online now for Seven Voices: A Tribute to Patsy Cline at City Winery DC on Sept. 8.

The next song was another new one, and it led to one of those moments that happens sometimes in live music. “I’m pregnant and I just wrote this song, so I forgot the words,” Jess admitted. She quickly regained her composure, and the lyrics came back to her. The band played one more song together before leaving Jess and Chris alone together on stage. As a duo, they performed Hank Williams’s “I’m So Lonesome I Could Cry,” and Jess brought out the washboards for a second tune.

The band came back, and they covered Amy Winehouse’s “Valerie.” The next song was wild: a friend wrote it on a $100 bet that they couldn’t write a song including “calliope,” “dolphin,” “Murphy bed,” and “shim-sham-shimmy.” (This hyphenation may not be correct.) Jess addressed the tune after that to “everyone who is a child at heart,” and it began with her and Chris playing pat-a-cake. They ended their set on a fine number that featured Donald taking it home with a pedal steel solo.

Returning for an encore, they played an “old-time Appalachian number in a not very Appalachian way,” jazzing up “Come All Your Virginia Gals.” For the last song of the night, Jacksons did a song about “getting frisky on a camping trip.”

Make plans to catch The Bumper Jacksons at a show in the DMV soon! Find their full concert schedule on their website.