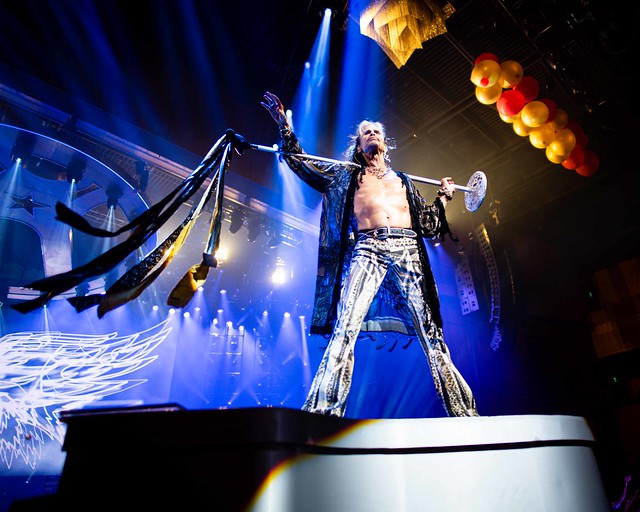 It’s fair to expect that anyone who has been working in the same job for nearly 50 years may have lost a step. The muscles aren’t as reactive, the passion for the job may have waned; father time is undefeated, and old age just catches up to everyone. Or maybe not.

Rock and roll legends Aerosmith have spent the past few months performing their Las Vegas residency show, Deuces Are Wild. But they are taking a brief hiatus from Vegas to bring the show on the road to three select cites for the Deuces Are Wild — East Coast Run. The brief, nine-show tour visits only three cities, but the whole thing kicked off at the MGM National Harbor, where the boys from Boston played the first concert of a three show mini residency on Aug. 8, and if there was any hesitation about the band’s abilities to perform, they were squashed immediately.

Following a 30-minute documentary that briefly delved into the history of each band member, the screens were raised, and as the band rose from beneath the back of the stage, the crowd jumped to their feet. Opening with their cover of Tiny Bradshaw’s “Train Kept-A-Rollin’,” Aerosmith advanced onto the stage with lead singer Steven Tyler rollin’ right to end of the cat walk to be surrounded by the fans.

A live Aerosmith performance captures the senses. Steven’s spastic excitability was on display for the entire show. Joe Perry looked like the yin to Steven’s yang, as he slowly glided around the stage with a quiet, unflappable cool. Both guitarist Brad Whitford and bassist Tom Hamilton had their time to shine as well, with Brad getting multiple guitar solos in “Last Child,” and Tom showing off one of the most iconic bass lines of all time when starting “Sweet Emotion.” The drums for this night were played by a member of Aerosmith’s crew. It was announced shortly before showtime that Joey Kramer had injured his ankle in rehearsals and would not be able to play.

Slowing the tempo down for a bit, Steven and Joe each took a seat at the end of the cat walk. Steven with his harmonica, and Joe with a steel-body guitar, the duo went into a very bluesy version of “Hangman Jury” off their Permanent Vacation album. Steven then pulled a female fan from the crowd to sit on the stage in front of the  “toxic twins” for a rendition of “Seasons Of Wither.”

Get A Grip was then represented with back to back songs from the early 90’s album. As the band rocked “Cryin’,” the iconic video staring Alicia Silverstone played on the giant screen behind the band. As song came to a close, there Silverstone hung larger than life, seemingly giving the finger to the crowd. At points throughout the night, Steven Tyler stated that he didn’t want to make any political statements despite being just outside of the nation’s capital. But when “Livin’ on the Edge” was played, the images being projected on the screens above the band showed clips of opioids, climate change, guns, homelessness, pollution, and more socioeconomic issues of today.

After more than an hour of dancing all over the stage of MGM National Harbor, Steven tackled the opening verse of “What It Takes” a cappella. The power in his voice that Steven showed in that moment showed exactly why this man, and this band, have remained relevant for nearly five decades. Despite all of the lasers, smoke, and intricate lighting changes, witnessing Steven stand under a simple spotlight and perfectly belt out a version of the song that was far more complicated than what was recorded on the album thirty years ago, was probably the highlight of the night. It was a man who after 50 years, could still nail the hardest parts of his job, and appear to do it excitedly and effortlessly. 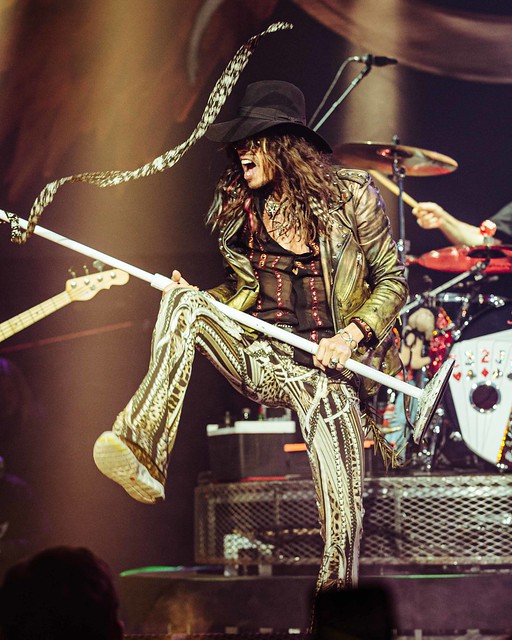 The encore started with a surprise, as Steven walked to the end of the catwalk and said “Going up,” and a grand piano arose from the floor as the band went into “Dream On”. Joe Perry made is way on top of the piano to play his guitar solo, and then relinquished the perch for Steven, who spent the last parts of the song atop the instrument hitting the highest falsettos of Dream On.

In a final bit of irony, during the last song of the night, “Walk This Way,” Steven tripped and fell on stage. Ever the showman, Steven didn’t miss a beat and continued singing the verse while laying flat on his back. The slightest of stumbles couldn’t ruin this night, and the band left the stage to a full standing ovation.

Fans can try and catch the final night of Aerosmith at National Harbor on Tuesday night, Aug. 13. There are very very few seats remaining!

Buy your tickets online now for Aerosmith at MGM National Harbor on Aug. 13! 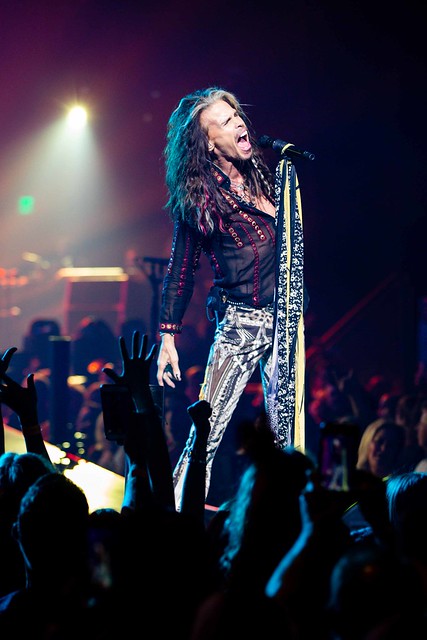 After MGM National Harbor, they make a short trip up the coast to Atlantic City to play at the Borgata, and then on to Massachusetts to finish the brief tour. If catching the band on this east coast tour isn’t an option, Aerosmith will resume their Las Vegas residency in September and have dates scheduled into December. Find details on Aerosmith’s website.