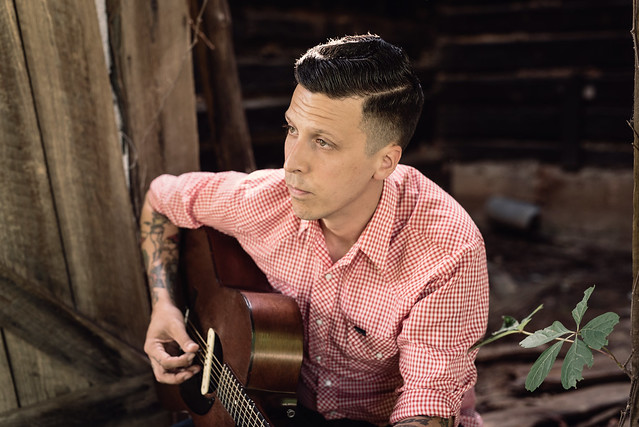 BJ Barham, lead singer and lyricist of the band American Aquarium, played a solo acoustic show at City Winery recently. He more than delivered on his promise to “continuously punch you in your feelings for the next 90 minutes,” entertaining the crowd with songs and stories for two hours.

BJ began his set with “Unfortunate Kind,” from his 2016 solo album Rockingham, named for his home county. The song tells the story of an aging couple, one of whom eventually dies from Alzheimer’s. “I like to start off the set,” BJ said, “with the saddest fucking song I can throw your way.” He quipped that he likes to “make the biggest motherfucker in the room cry.” He teased a fan who he suggested was this evening’s target, and he made an allusion to adults breaking down at Toy Story 3

As a songwriter, BJ said, “The goal is to use a small amount of words to paint to a big picture.” He admitted that he has “failed many times” at that, but when he plays “Unfortunate Kind,” it “always hits.”

“One Day At A Time,” from American Aquarium’s latest album, 2018’s Things Change, tackles BJ’s sobriety and references the Byrd’s milestone country-rock album Sweetheart of the Rodeo. BJ shared that he’ll be sober five years on Aug. 31. He took his last drink at a family reunion after declaring “I’m never drinking again,” which many present dismissed. BJ doesn’t attend AA meetings; he described them as having “a little too much God.” This song, he said, is how he holds himself accountable.

BJ played material that he plans to use on his release next year with American Aquarium. “Me (And My Lamentations)” portrays a town’s decline. A native of Reidsville, North Carolina, which has a population just under 15,000, BJ often writes about the plight of smaller communities in the face of economic devastation. He talked about politics and music, and argued that country music has always been political, depicting it as music that gave voice to the people.

Further expounding upon his ideas, BJ told the audience that “Sam Hunt isn’t country music.” He mocked the song “Cruise” for having nine co-writers, yet somehow failing to have any truly interesting or insightful lyrics. Someone asked about people he’s toured with, and BJ responded that, in the past, he’d had no control over groups like Florida-Georgia Line touring with American Aquarium. He’s reached a stage in his career where he has a lot more control over the band’s opening acts.

BJ’s father greatly dislikes “The World Is On Fire.” He explained that his father is a conservative “for economic reasons,” describing him as very fiscal. His father maintained a certain skepticism about his son’s occupation until one recent Father’s Day, when BJ surprised him with a lawnmower. “You can’t buy happiness,” BJ admitted, “but you can buy your father’s love and respect.”

BJ gave the audience a sample of his older music, playing “I Hope He Breaks Your Heart” from 2009’s Dances for the Lonely. Before he got sober, a lot of his songs, he said, dealt with failed relationships. He tended to place the blame on his former partners. At some point, he had the epiphany that the common factor in his failed relationships was him.

American Aquarium has experienced a lot of turnover, and BJ owned up to it. He said that, when you’ve had 42 members in and out of the band over the years, you have to recognize that you might be doing some things that drive people away. He qualified this by saying that for six years, through Burn.flickr.die and Wolves, he had a lineup in Aquarium that went unchanged.

Playing another new song, BJ sang “I’m going straight to hell for all the things I put you through.” He followed that with “Losing Side 25,” then a song he wrote for his wife. Continuing with new material, he played a song he’d written just today.

Closing his set with “Burn.Flickr.die,” BJ eschewed the hoopla of an encore. He said that this song was part of a big change for the band. When they released this album, they started selling — small venues, but it was their first taste of success. BJ had been ready to quit the music business, but Jason Isbell convinced him to record the songs, for which he remains grateful.

After BJ finished playing, he set down his guitar, and hopped off the stage to make his way over to the merch table. Throughout the evening, BJ was engaging, funny, and smart. The two hours of his show flew by, never dragging. If you have a chance to catch him on tour, he’s more than worth your time. He knows how to entertain a crowd. I’ve only given a taste of his stage banter, which is truly excellent, and you should take in it firsthand.