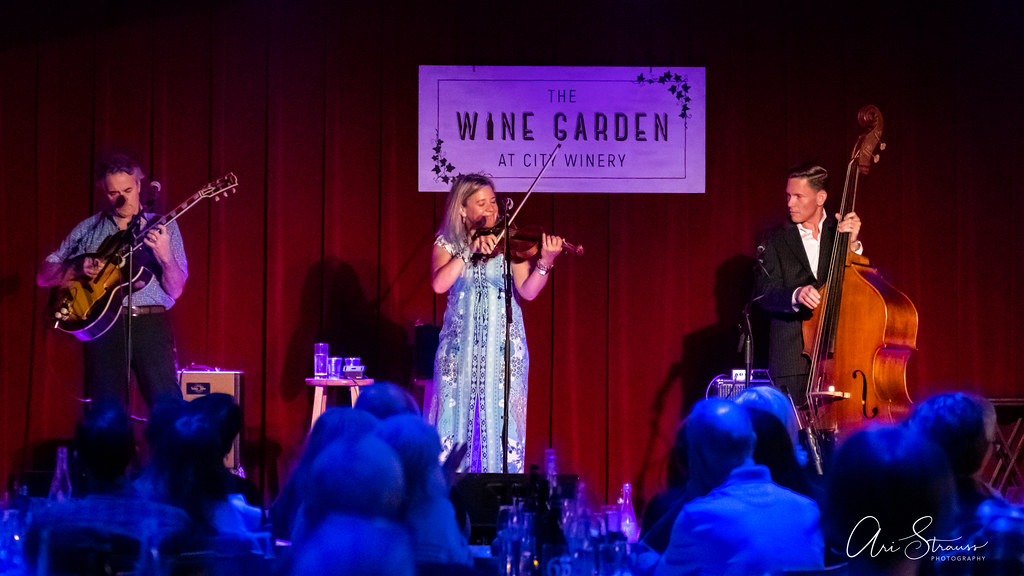 Hot Club of Cowtown delighted DC fans recently with a twilight show at City Winery DC in the venue’s roof-top Wine Garden performance space. The Austin, Texas-based hot jazz/Western swing trio is set to release its new album, Wild Kingdom, on Sept. 27, and they used the show as an opportunity to preview its new material.

Click on the album art below to pre-order Wild Kingdom by Hot Club for Cowtown. 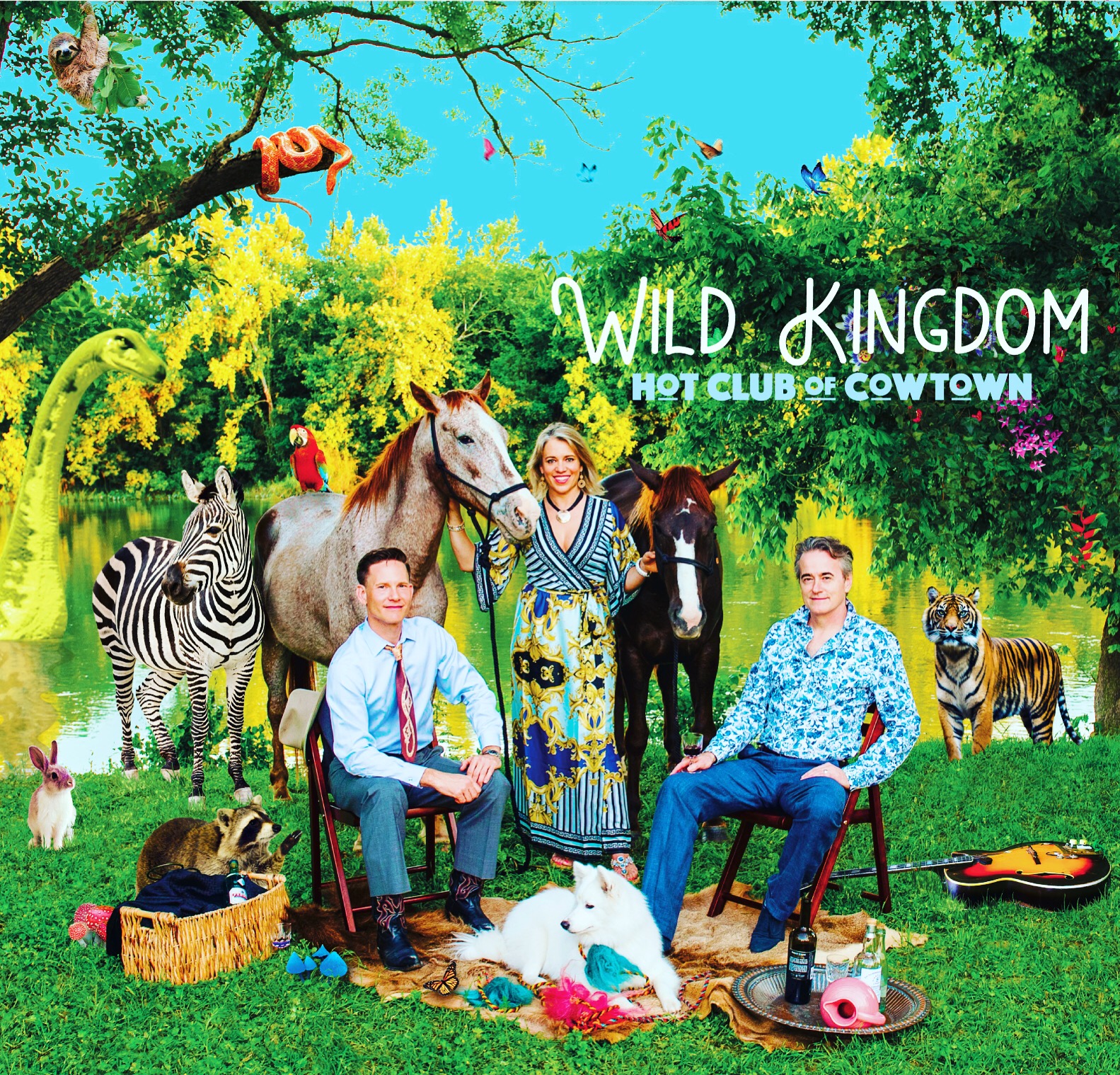 Wild Kingdom is the first album of new material released in over a decade by the trio, which consists of singer/violinist Elana James, singer/guitarist Whit Smith, and bassist Jake Erwin.

“It just kind of happened,” explained Elena when discussing the long gap between album releases with Billboard recently. “There’re so many things we like to play that we just knocked out those various projects. This band didn’t start because we were songwriters, it started because we were and are instrumentalists who just love to play, so we didn’t feel anything was missing by doing a bunch of Hot Club of France tunes or old Western stuff. Over time we did start to write more of our own stuff, and now, once again, it’s become time to do our own songs this time.”

Hot Club of Cowtown formed in 1997. The band’s name comes from two sources: “Hot Club” from the famous hot jazz group of the 1930’s and 40’s, Quintette du Hot Club de France, and “Cowtown” from the western swing combos that influence the group’s sound. Whit and Elana met through an ad in the classified music section of The Village Voice in 1994. They played together in New York City before moving to San Diego in 1997 where they spent a year busking and building up their repertoire. They moved to Austin, Texas in 1998 and soon brought Jake into the band to round out the trio.

Though Hot Club of Cowtown has been around for over 20 years, I only learned of them earlier this year when they joined with Dustbowl Revival to give a joint performance at The Barns at Wolf Trap celebrating the 50th anniversary of The Band.

Check out Parklife DC’s review of Hot Club of Cowtown and Dustbowl Revival performing at The Barns of Wolf Trap, Feb. 2, 2019.

Hot Club released Crossing the Great Divide, a 7-track EP of The Band covers in advance of the Wolf Trap performance.

Listen to Crossing the Great Divide by Hot Club of Cowtown on Spotify:

During the Wine Garden performance on Sept. 5, I was particularly enamored with Whit’s guitar and amp. He plays a gorgeous 1946 Gibson L5 vintage sunburst archtop guitar. Interestingly, the guitar has no pick guard, nor does it have an installed pickup. Instead, Whit has outfitted his vintage L5 with a rather unique solution using a TK Smith pickup that sits outside the guitar at the base of the neck.

Neither the pickup or any of its electronic parts are permanently installed inside the guitar. It all sits on the outer surface and is held in place by putty. Its certainly nothing I’ve ever seen before, but I can’t argue with the results. The sound is beautiful. 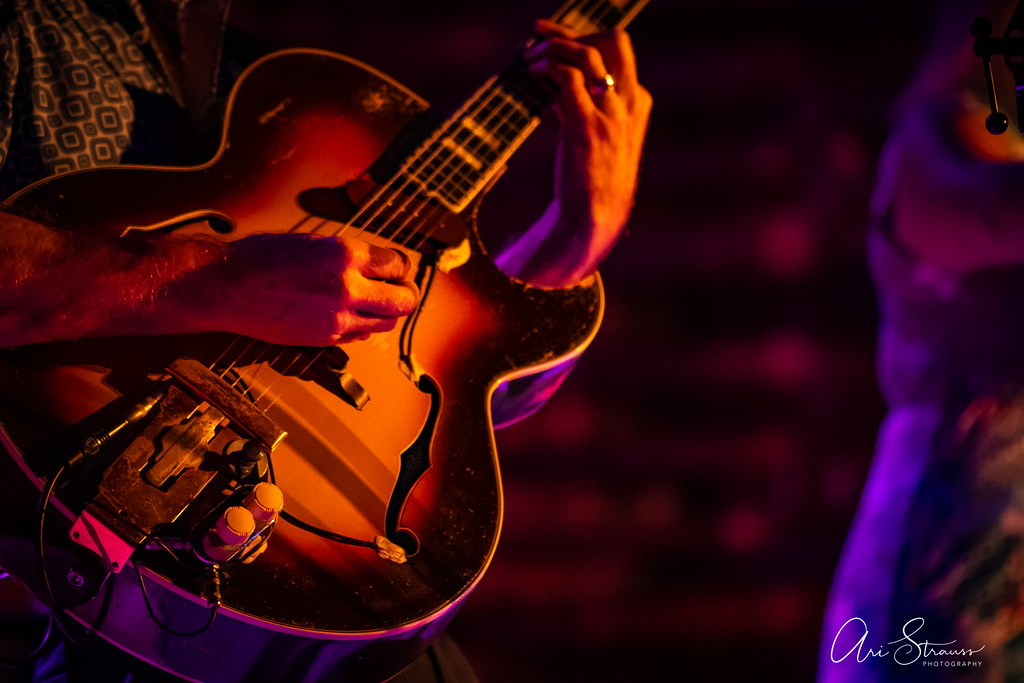 A closeup of the Whit Smith’s 1946 Gibson L5 with a TK Smith pickup system installed outside the guitar and held in place with putty. (Photo by Ari Strauss)

Whit plugs into a small 14-pound Space Tone Atomic Jr. amp made by the Swart Amplifier Company of Wilmington, North Carolina. The amp has a vintage appearance but is actually a product of contemporary manufacturing that incorporates a mix of classic tube technology and modern electronics. Together with the vintage L5, it produces the buttery-smooth jazzy guitar sound that is one of the hallmarks of Hot Club of Cowtown. I can’t wait for their new album to drop on Sept. 27.

Enjoy some additional photos of Hot Club of Cowtown performing in the Wine Garden at City Winery on Sept. 5, 2019. All images copyright and courtesy of Ari Strauss. 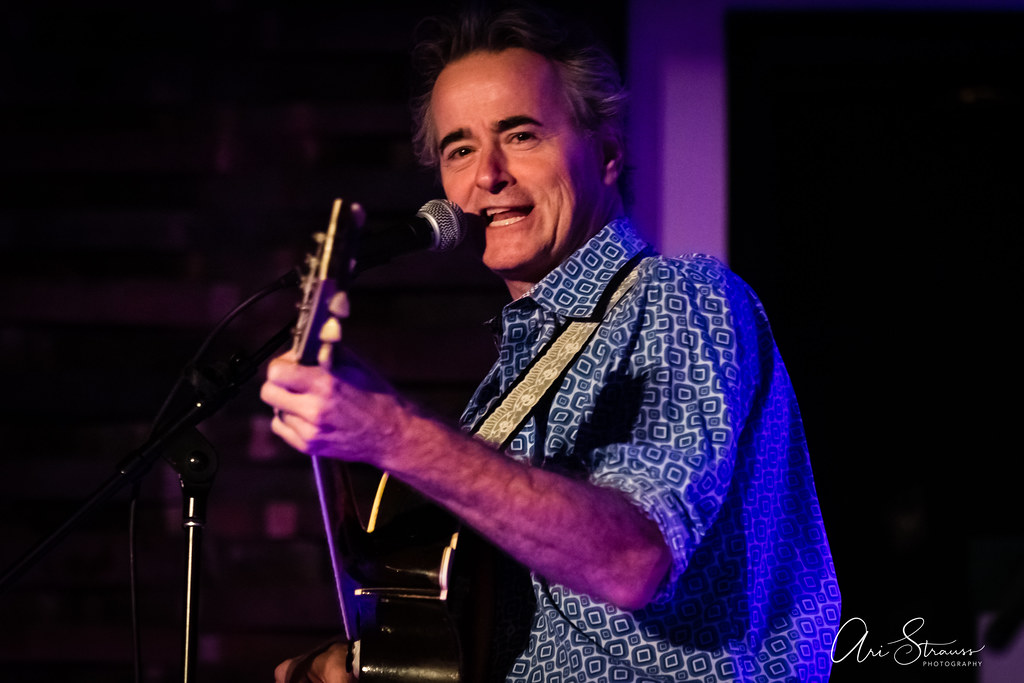 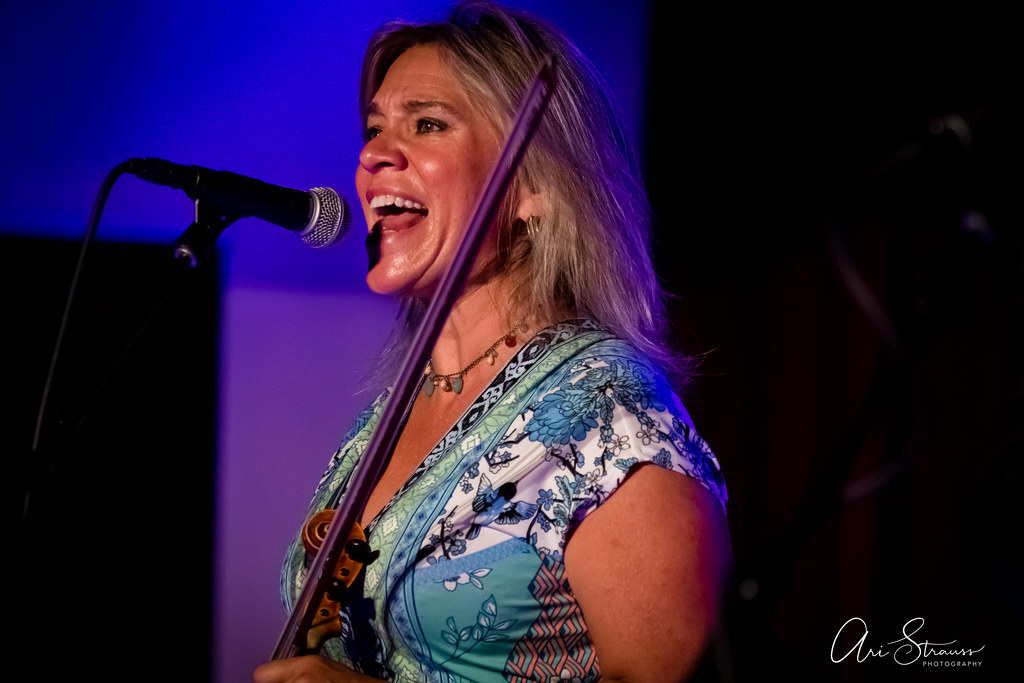 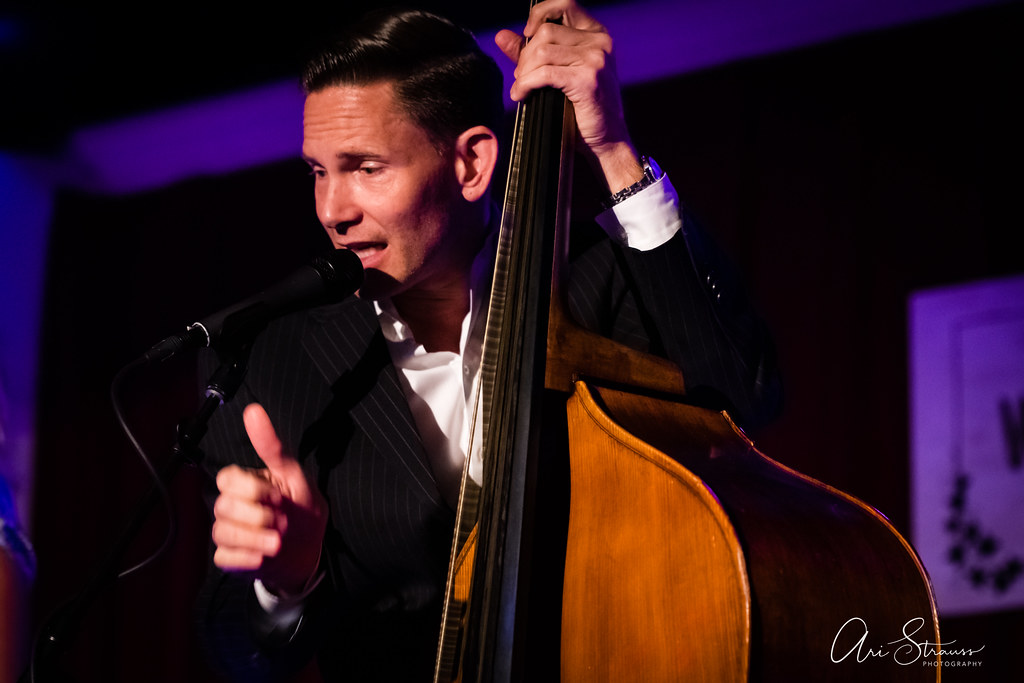 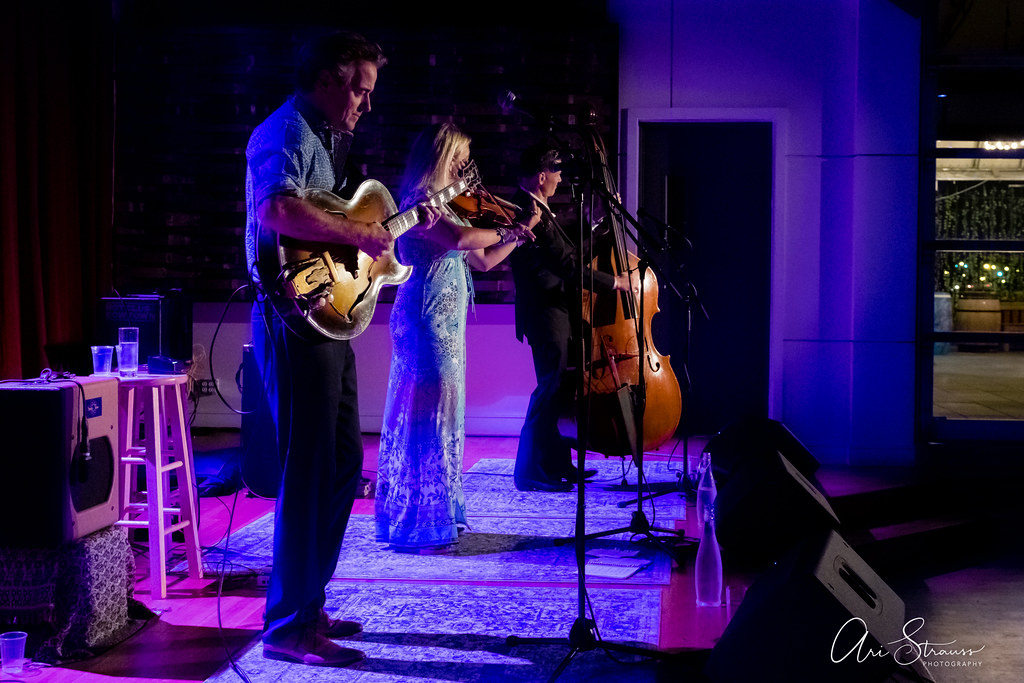 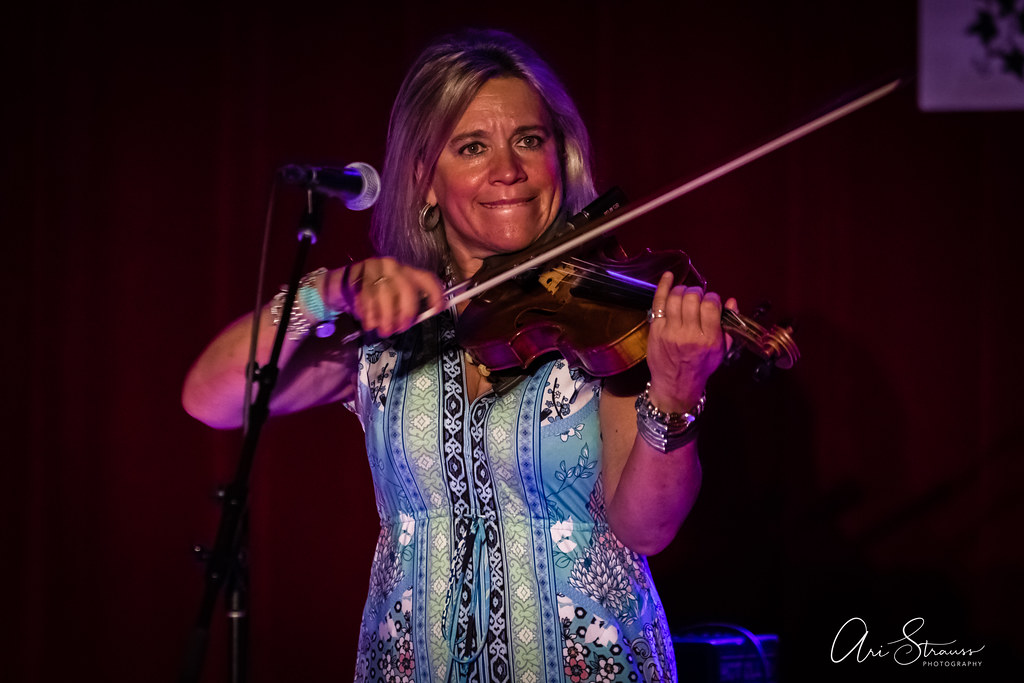 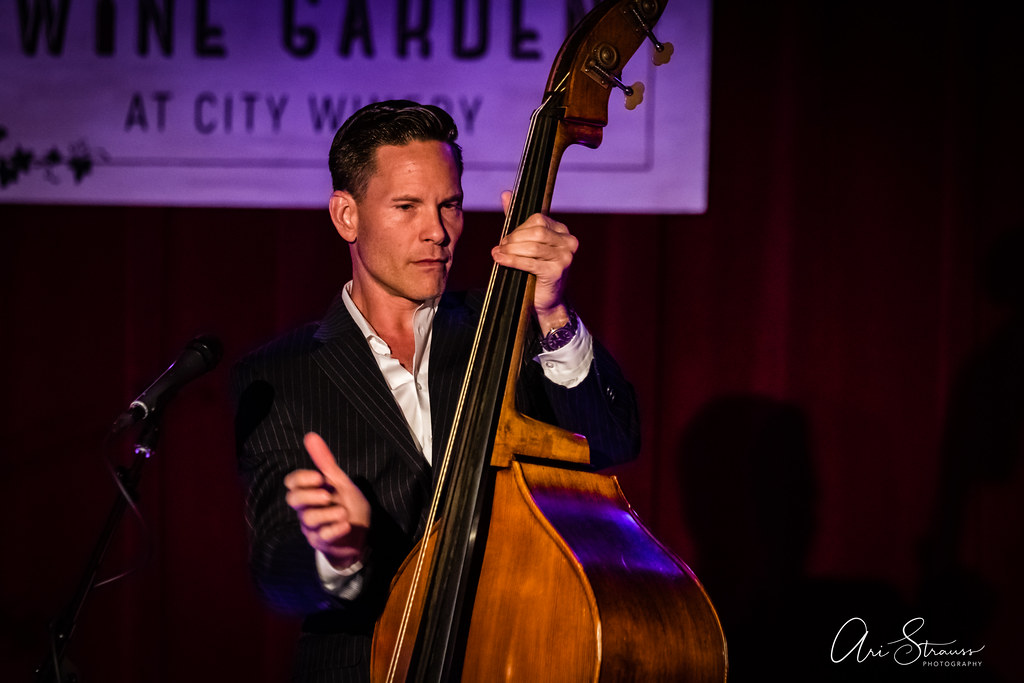 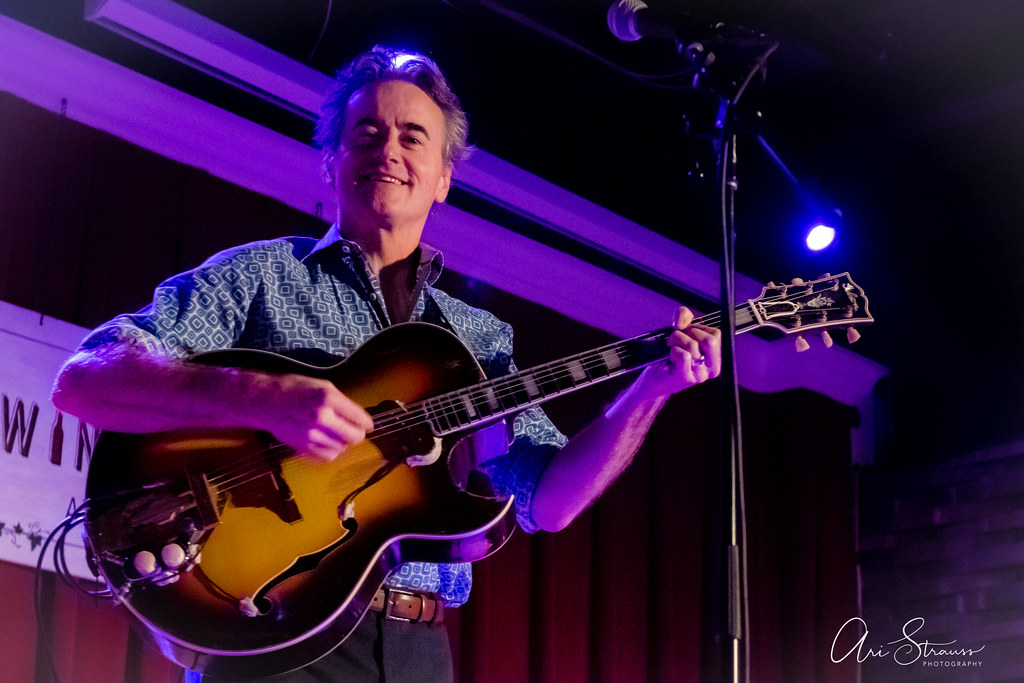 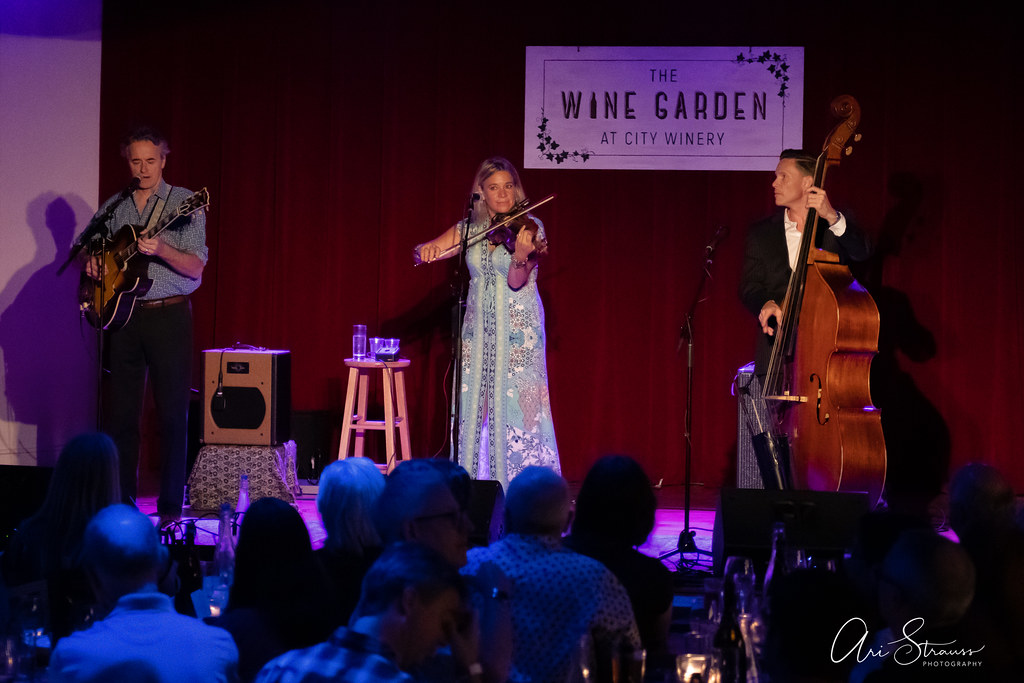 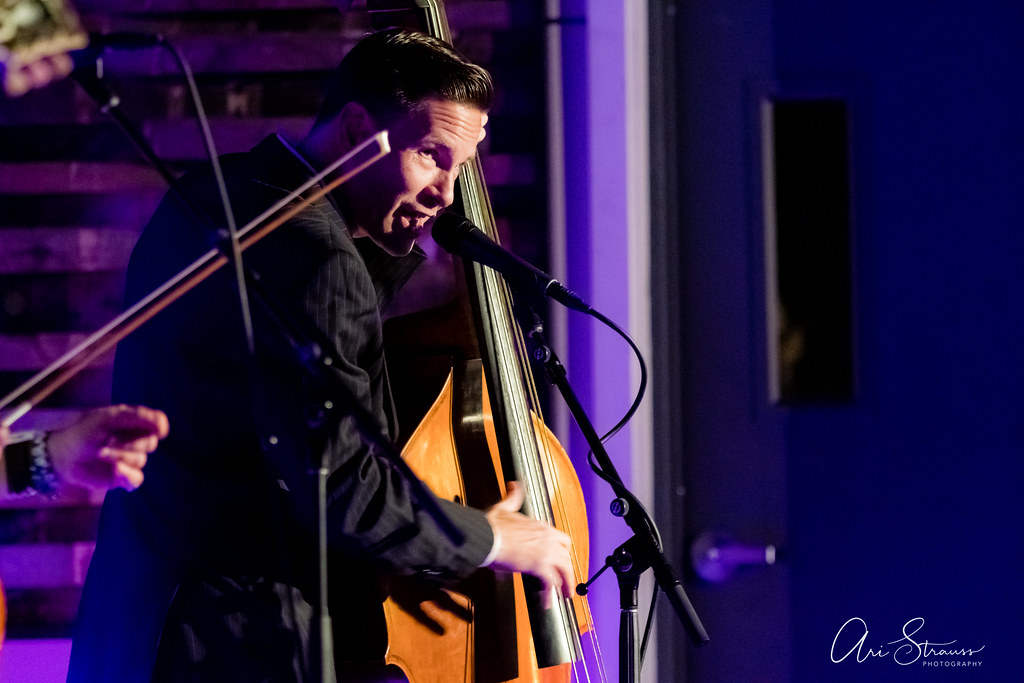 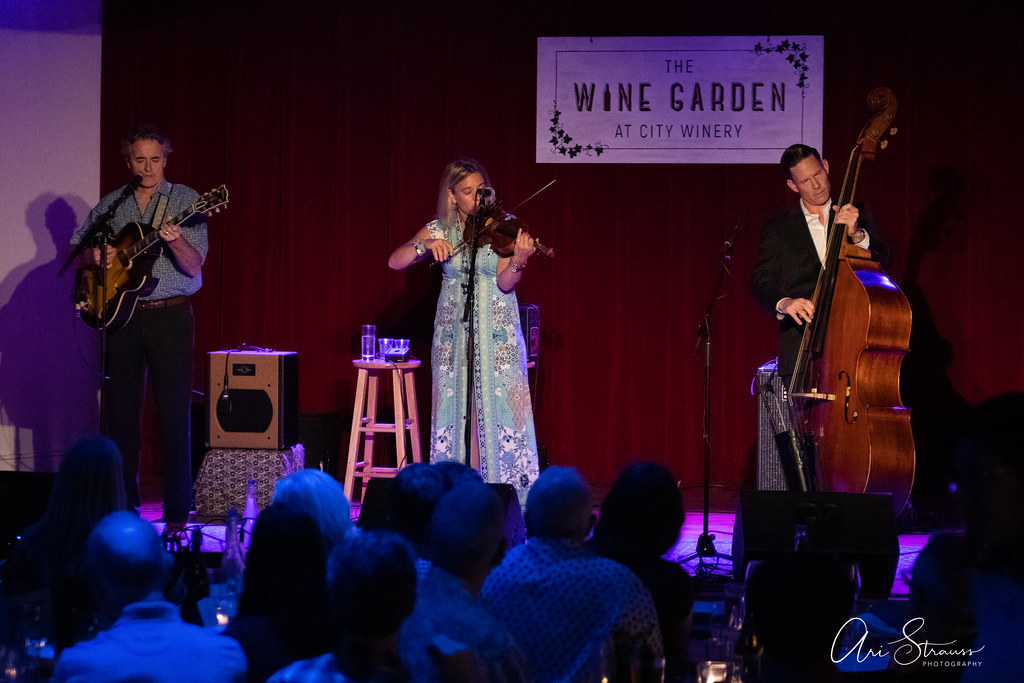 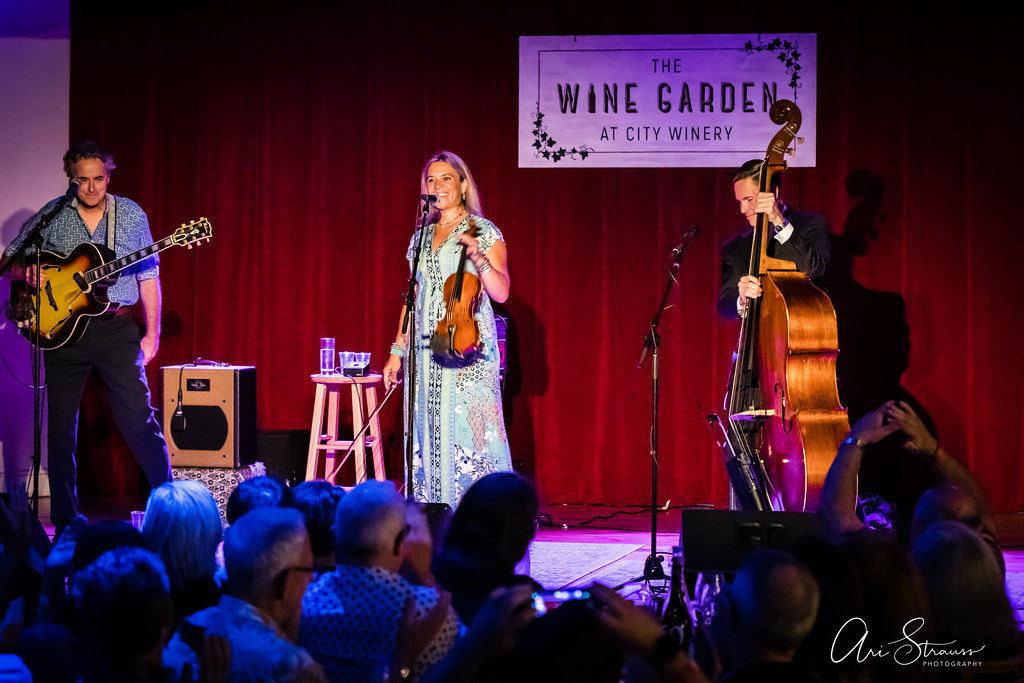