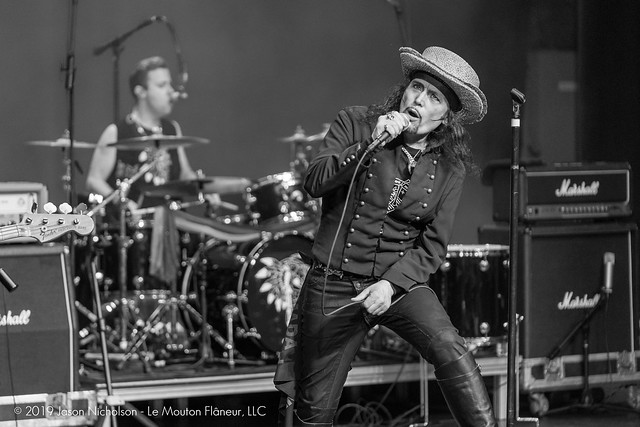 Stuart Goddard, who is responsible for 22 hit singles as Adam Ant, mugged, danced, and chatted his way through a lengthy show with an adoring audience at the Lincoln Theatre recently.

During the show, Adam Ant performed Friend or Foe, his debut solo album (but his fourth studio record overall), live in its entirety for the first time in DC, giving an earnest glam treatment to long-time favorites like “Goody Two Shoes,” “Desperate But Not Serious,” and “Friend or Foe.”

On Sept. 23, a very trim Adam threw his hips into “Friend or Foe” at the top of the show, blasting things off with a terrific Ant tune that captures the devil-may-care persona of the musical buccaneer. Adam ran through the 12 tracks of Friend or Foe in tracklist order, beaming, glaring, snarling, laughing, and all the while dancing his way through the beloved album, which surely features his best-known hit “Goody Two Shoes.”

And Adam also stood and delivered for highlights like “Place in the Country,” a tune of awakened ambitions, and “Hello, I Love You,” a smartly respectful cover of The Doors hit.

The audience clamored for more, and Adam obliged them in a show that stretched more than two hours. He and his indefatigable band drummed through a setlist of 28 songs, reaching mostly into the three records released by Adam and the Ants, although they included the solo selections of “Vive le Rock” at the concert’s midpoint and “Strip” at about the two-thirds mark. Adam ended the main set on a parade of Ant tentpoles — “Kings of the Wild Frontier,” “Beat My Guest,” and the exhilarating “Stand and Deliver.”

Adam’s band worked in synch like clockwork behind him, providing a foundation upon which Adam could prance or glower, depending on the mood of the song. The Brit Award winner chose his players wisely, and his guitar players strummed or stormed appropriately for the whimsical or assertive numbers. Will Crewdson on lead guitar and AP Leach on rhythm guitar worked like cogs in a magnificent wheel with bassist Joe Holweger, filling the air with the glam thump of the Ant catalog. In concert, Adam and his crew stripped the songs of much of their thrills to present them in a manner that hewed closely to his youthful inspirations. Ultimately, it was music that honored the traditions of T. Rex and Ziggy Stardust-period Bowie.

But a modern Adam Ant show isn’t an Adam Ant show at all if not for the drums — tribal, unrelenting, dominant. And his band, generally called The Good, The Bad & The Lovely Posse, includes two of the very best drummers with Andy Woodard and the mysterious Jola. Yes, the show consistently has two drummers, both roiling throughout the show, and it goes beyond to see the guitarists take up drums during particularly stirring moments, such as the end sequence of “Stand and Deliver,” when the guitarists gathered around a large kettle drum and the bassist stood at another to pound home the refrain “Stand and deliver… your money or your life!”

Adam Ant wrapped his current US tour in Miami on Oct. 1, but with luck, he’ll return soon. He still a showman, after all, and he’s got a show to do indeed. Track Adam Ant on his website.

As usual of late, Adam brought along Los-Angeles based girl group Glam Skanks to open the show.

Their forthcoming album, Anywhere in Between is produced by GRAMMY-nominated producers Bruce Witkin and Ryan Dorn. They’ve also opened for Alice Cooper and The Skids, and played as Cherie Currie’s (The Runaways) backup band. Guitarist Veronica Witkin arrived with a revamped Glam Skans lineup that included Millie Chan (bass), Vanessa McNiel (vocals), and Jessica Goodwin (drums), and the ladies rocked just as hard as they did in previous visits. Learn more about Glam Skanks on their website, and check out our pix of them at the Lincoln Theatre!

Here are some pictures of the Glam Skanks performing at the Lincoln Theatre on Sept. 23, 2019. All photos copyright and courtesy of Jason Nicholson. 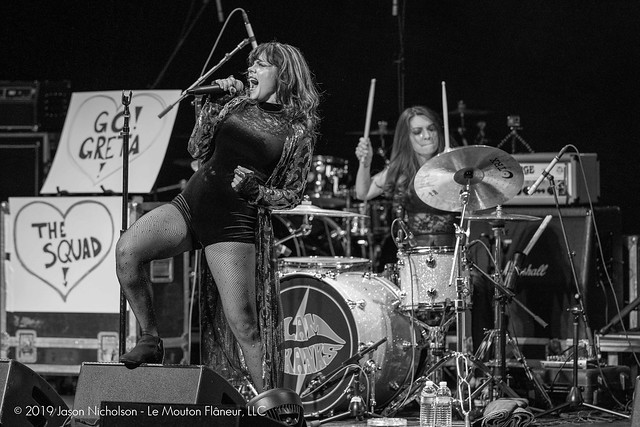 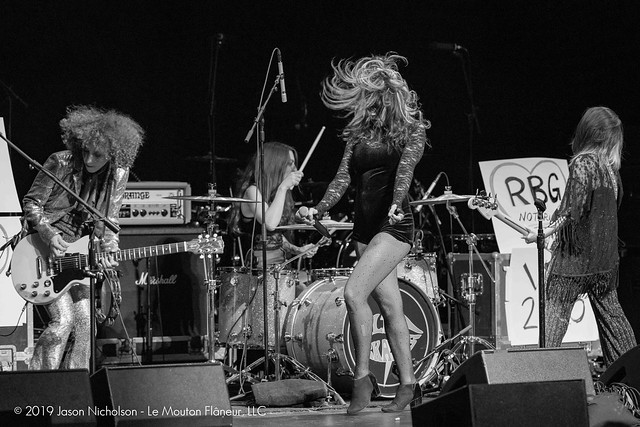 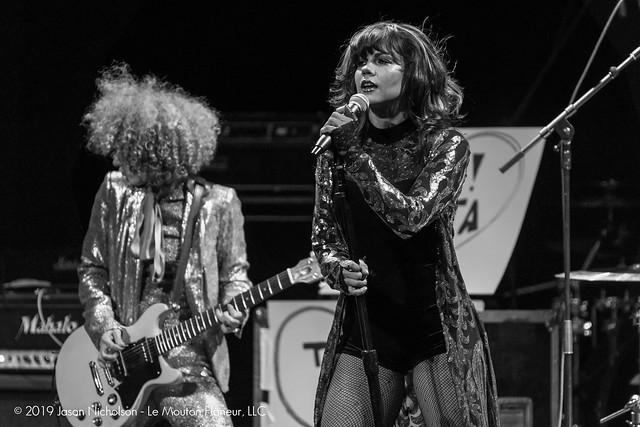 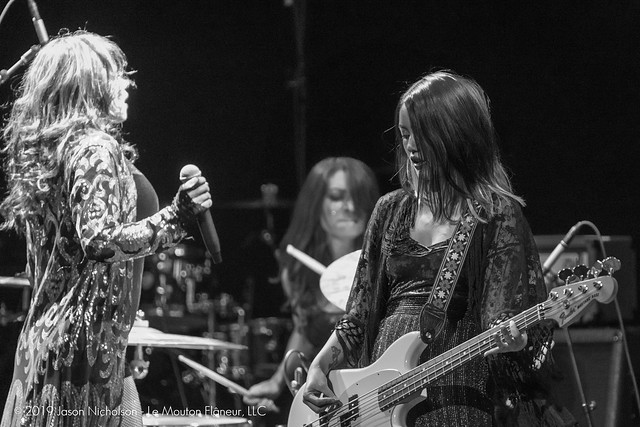 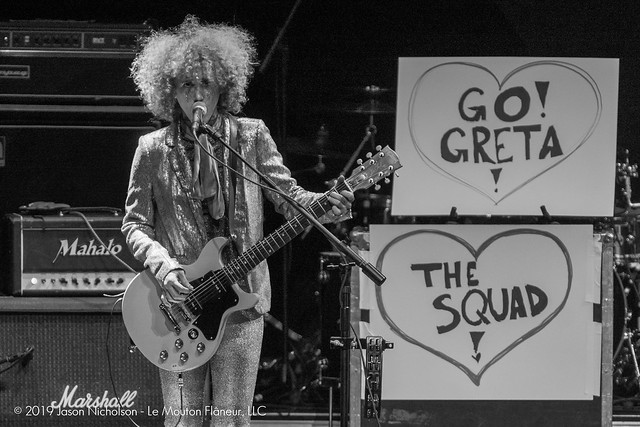 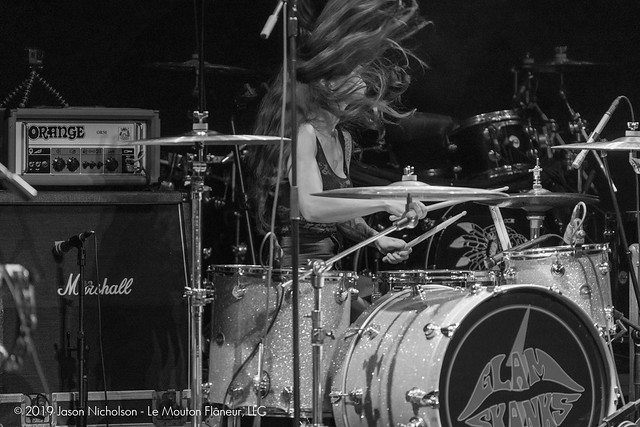 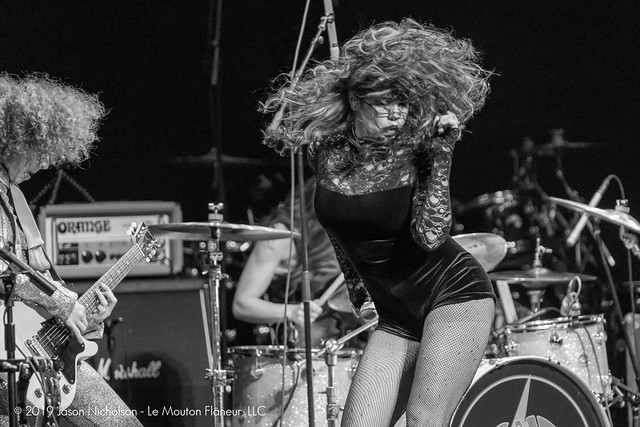 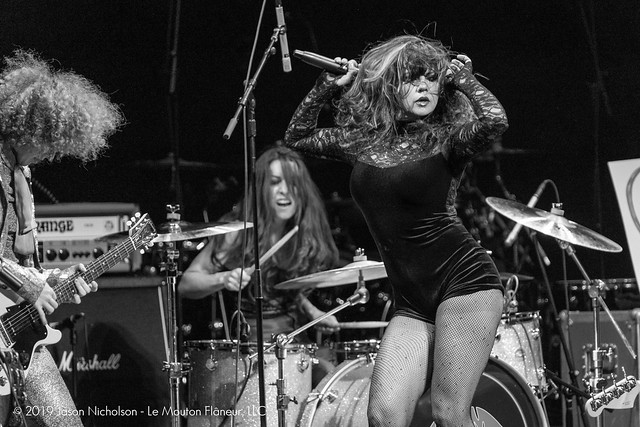 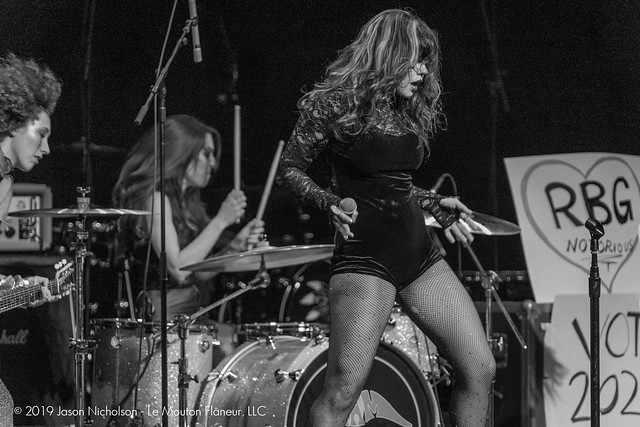 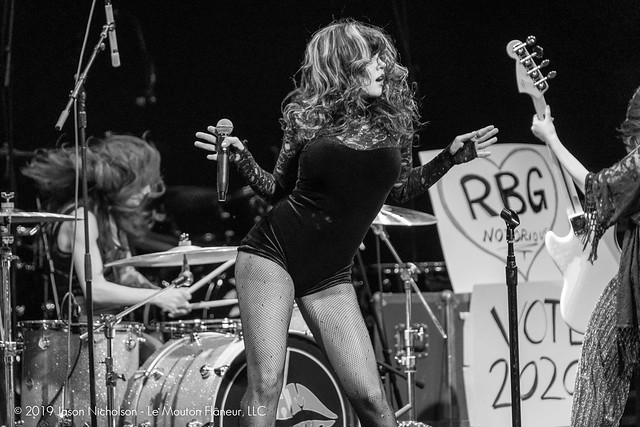 Here are some pictures of Adam Ant performing at the Lincoln Theatre on Sept. 23, 2019. All photos copyright and courtesy of Jason Nicholson. 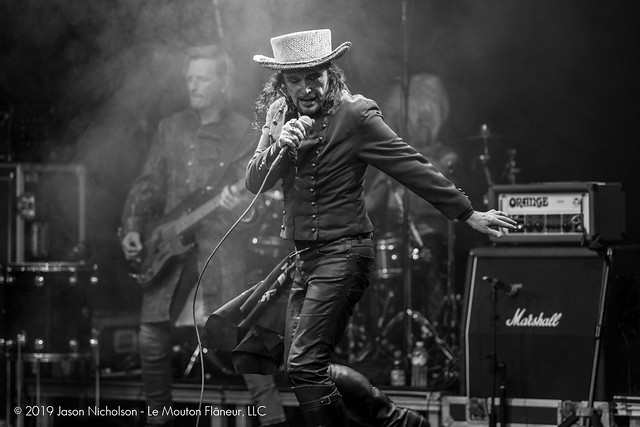 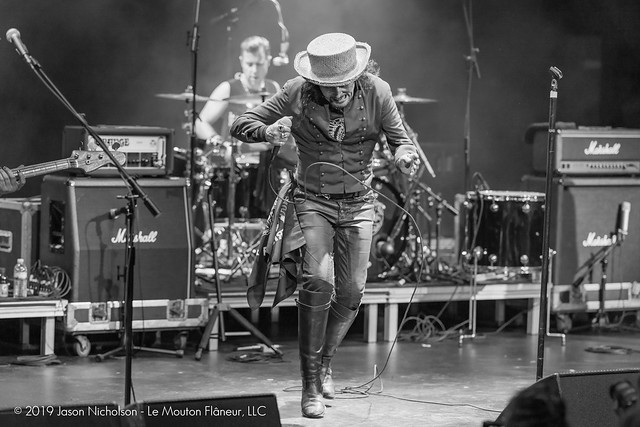 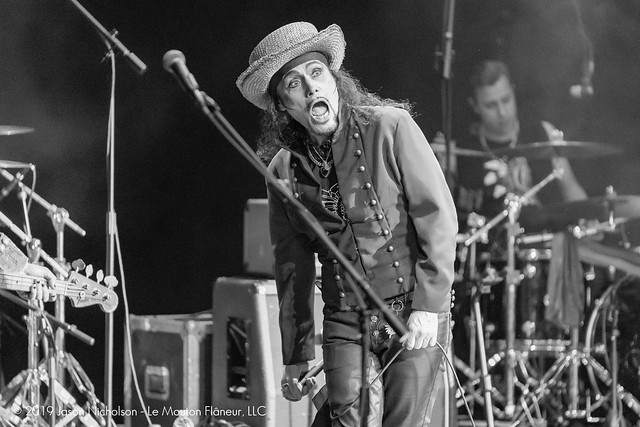 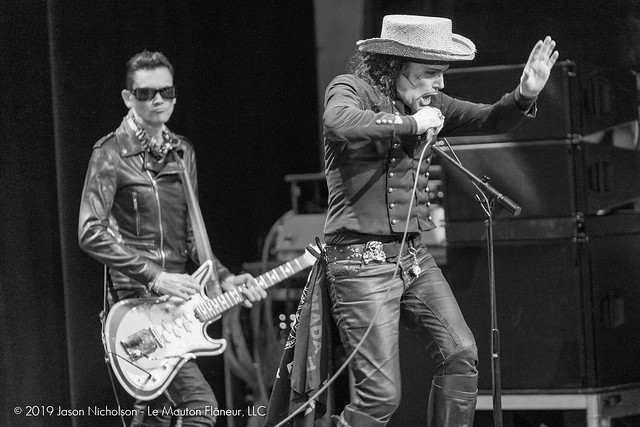 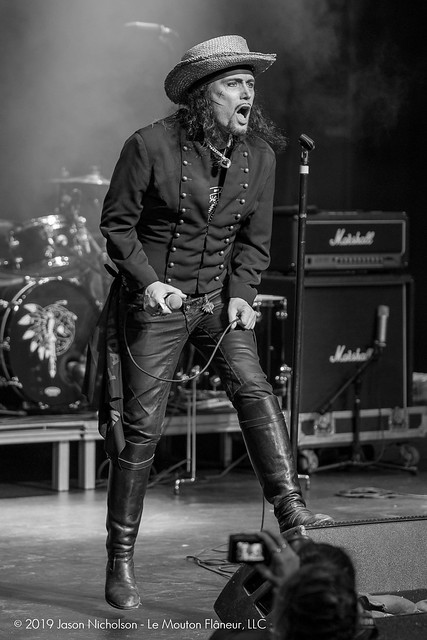 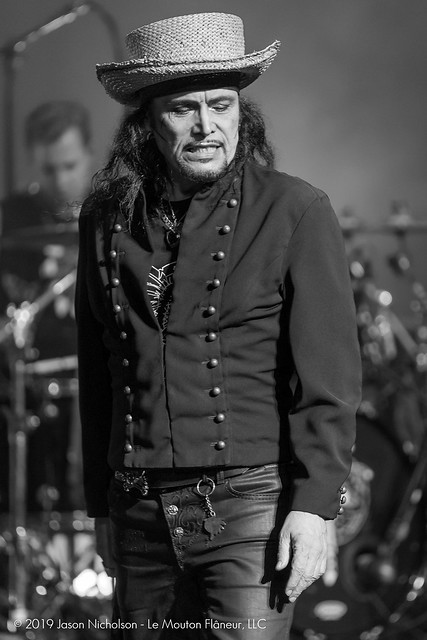 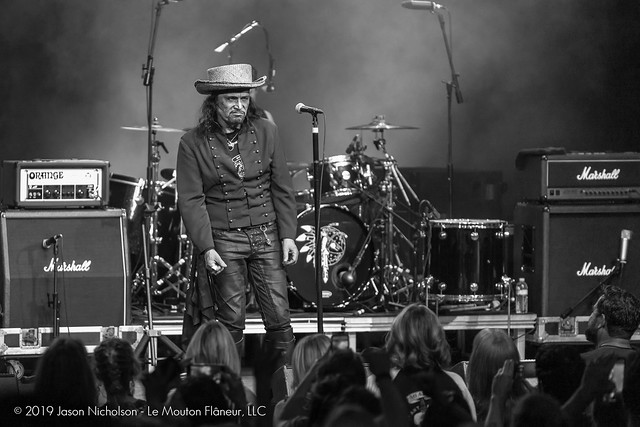 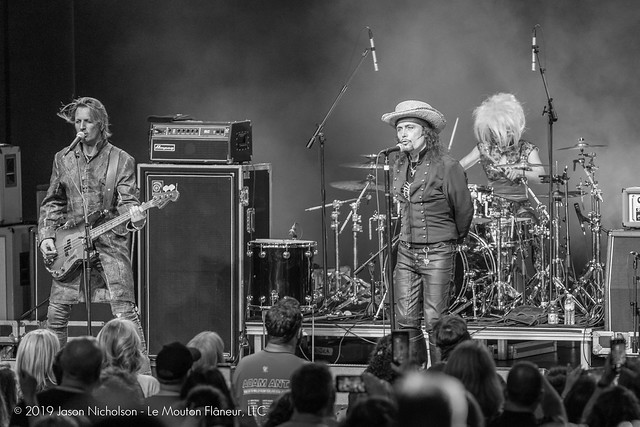