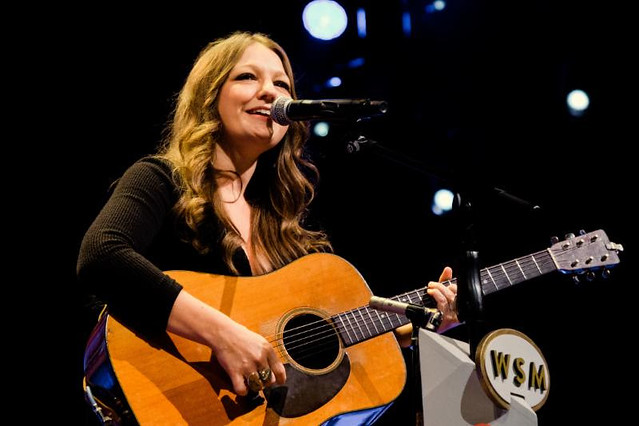 The first artist signed to John Prine’s Oh Boy! records in 15 years, Kelsey recently released the excellent White Noise/White Lines. With wry turns of phrase and a great sound on Oct. 8, Kelsey showed just why the legendary singer-songwriter, who she called her hero and mentor, was interested.

Kelsey opened her set with “Travelin’ Down This Lonesome Road,” from her 2016 album I’ve Got a Way. The pride of Monkey’s Eyebrow, Kentucky, then turned to her recently released material, singing a beautiful tribute to her parents, “Kentucky 1988,” declaring “This is my DNA, no how far I get away.” (On the album, she samples a voicemail from her father to being the track.)

In “Run Away,” Kelsey chided an ex, “Don’t get lost in your mind, you’re only wasting our time.” Other songs got political. Singing “Lived and Let Go,” she declared, “I can’t watch the news for the life of me, Seems the seeds that we’re sowin’ are gettin’ heavy to bear.” In the chorus, she painted a picture of unity through our differences difference, singing “I can hear us all singin’ our own lullaby, Sinners and posers and holy rollers, We all get along in the sweet by-and-by.” “Sunday’s Children” exhorted the audience to “Tear down the walls we build.” At the conclusion of the song, she remarked “We should be preaching a lot more love in this world.”

Kelsey found room to expand the boundaries of her hard country, honky tonk sound. A bass riff with debts to R&B kicked off “Sunday’s Children,” while a thread of swamp rock ran through the title track of that recent album. Throughout the latter, she came back to the line, “Only here for a moment, then we’re gone.”

In addition to new material, Kelsey also played songs from her previous albums. She played the title cut of her 2014 recording, The Goldmine, well as “Black Patch,” “High in Heels,” “Dirty Old Town,” and “The Heartbreak.” Toward the end of her set, she covered, in the style of Waylon Jennings, Neil Young’s “Are You Ready for the Country?” For her encore, she played “All by Myself.”