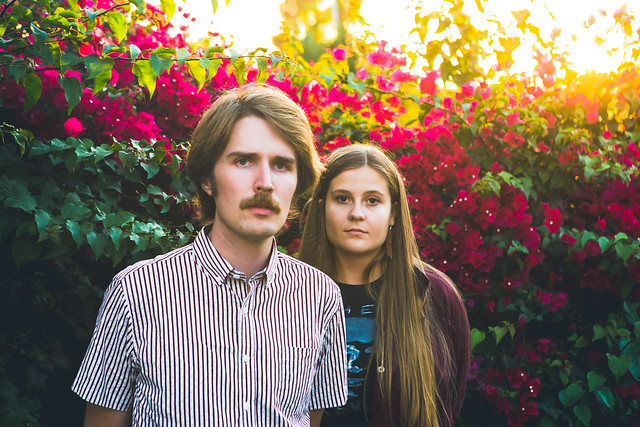 Earlier this month, New West released the fourth album by Clayton Linthicum and Kacy Anderson — Carrying On. Better known as Kacy & Clayton, the duo brought their folk stylings to the Music Center at Strathmore recently, opening for Ray LaMontagne.

On Oct. 15, Clayton played lead acoustic guitar and did a little bit of singing. Kacy sang most of the warm, gorgeous vocals and contributed guitar harmonies to a few numbers. The duo began their set with the title cut from their second album, 2016’s Strange Country, a traditionally minded (though original) story song about unjust imprisonment, before turning to their new material.

Produced by Wilco frontman Jeff Tweedy, the new album sees the second cousins exploring a more country-tinged sound. In “That Sweet Orchestra Sound,” they paid tribute to the music they love while conjuring a setting that is once both mythic and lived-in. “High Holiday,” Clayton joked, is not about 4/20 (a marijuana reference); rather, it describes a day in Buffalo, Wyoming, when a harsh winter storm has closed everything in town.

Stream Carrying On by Kacy & Clayton on Spotify:

It might surprise many Americans to learn that not only cattle ranching but cowboy culture flourishes in the plains provinces of Canada. Calgary has a large annual rodeo called the Stampede. Friends since childhood, Kacy & Clayton grew up a few miles from each other on a cattle ranch in rural Wood Mountain Uplands, Saskatchewan. Growing up on a cattle ranch, Clayton said, they developed a fascination with cowboy music, much like fellow Saskatchewan musician Colter Wall — though not so much with the cattle! Their set Tuesday night included the traditional cowboy song “Bar Double U,” and their albums are peppered with such traditional tunes.

After a song about a lost love, “In a Time of Doubt,” Kacy sang about how “grandpa got sick” at “the first fall of snow.” Clayton joked, “You’re probably wondering, when are these fools going to get off stage?” “The Rio Grande,” set in Texas, featured a sharp guitar solo by Clayton that made an impression on the audience. They finished their set with the traditional ballad, “Go and Leave Me,” which they recorded on their third album, 2017’s Siren Song.

For more information on Kacy & Clayton, visit the duo’s website!