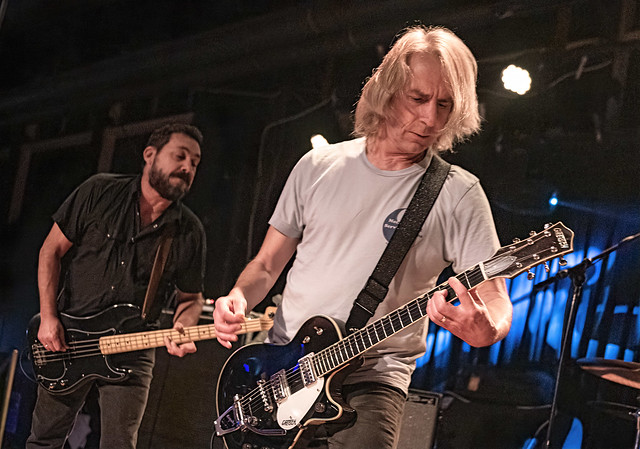 Mark Arm (vocals/guitar), Dan Peters (drums), Steve Turner (guitar/vocals), and Guy Maddison (bass) continue to put out some of their best work and just released a new EP entitled “Morning in America” replete with that fuzzed out thunder that we’ve come to expect from the band. And on a chilly night on Oct. 18, Mudhoney brought the heat to the Baltimore Soundstage.

Opening for Mudhoney were Kid Congo Powers and the Pink Monkey Birds. Kid Congo Powers having played in The Cramps, Nick Cave and the Bad Seeds — and he was a founding member of The Gun Club. The band put on a frenetic performance, priming this crowd for the legendary Mudhoney.

Hitting the stage, Mudhoney came out swinging with “In ‘n’ Out of Grace” from their first release, the Superfuzz Bigmuff. After a bit of a false start, the band huddled together and then came out blasting with “I Like It Small” followed by “Hey, Neanderfuck” from their last full length, Digital Garbage — an I-told-you-so to propping up the lowest common denominator. Pure punk rock if ever I’ve heard it. And each member played with a passion. It’s refreshing to see new tunes that rock as hard if not harder than before.

And the surprises kept coming as the band played a bit of everything from fan favorite “Touch Me I’m Sick” to the sludgy stomp of “I’m Now” with Mark taking the mic and using that patented wail while the band rocked on. Even before the encore, Mudhoney had performed over 20 songs without any hint of tiring.

As if that wasn’t show enough, for the encore Mark and company brought out Soundgarden guitarist Kim Thayil, who lit up the stage, playing through “The Money Will Roll Right In” and “Hate the Police” as Mark barked out “I’ll tell you one thing, it’s true / You can’t find justice, it’ll find you” and finishing out the set with a cover of Black Flag’s “Fix Me.”

This was an amazing set, and one that this audience won’t soon forget. Mudhoney is currently on tour and more dates are listed here.

In ‘n’ Out of Grace
I Like It Small
Hey, Neanderfuck
You Got It (Keep It Outta My Face)
Nerve Attack
Prosperity Gospel
The Farther I Go
Good Enough
Judgement, Rage, Retribution and Thyme
Kill Yourself Live
Touch Me I’m Sick
Vortex of Lies
Suck You Dry
Creeps Are Everywhere
Next Mass Extinction
FDK (Fearless Doctor Killers)
Oh Yeah
I’m Now
Paranoid Core
One Bad Actor
The Only Son of the Widow from Nain
21st Century Pharisees

Here are more photos of Mudhoney performing at the Baltimore Soundstage on Oct. 18, 2019. All photos copyright and courtesy of David LaMason.