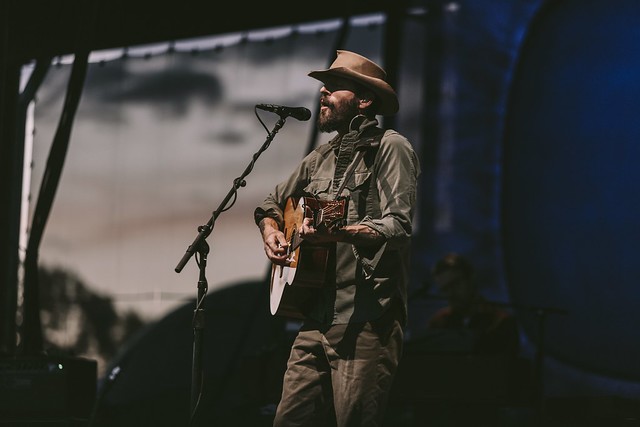 After a terrific opening set by the Canadian duo Kacy & Clayton, Ray LaMontagne took the stage at the Music Center at Strathmore recently. Accompanying him was Carl Broemel, the guitarist in My Morning Jacket. They began with “Be Here Now,” both playing acoustic guitar. The New Hampshire-born singer-songwriter followed with “Hold You in Arms,” from his first album, 2004’s Trouble.

For “No Other Way,” Carl switched out his acoustic for an electric guitar during his Strathmore show on Oct. 15. The crowd applauded when they heard the opening notes of his next song, “Beg, Steal, or Borrow.” After “Lavender,” Ray’s guitar tech came out to swap his acoustic for another model. Between songs, someone in the crowd shouted, “We love you Ray!” He calmly replied, “It’s nice to be loved. It’s a lot better than the alternative.” Someone else then exclaimed, “We haven’t forgotten you, Carl!” drawing scattered laughter.

Ray played the title cut of his latest album, 2018’s “Part of the Light.” Carl sat down at the pedal steel for “Old Before Your Time,” from 2010’s God Willin’ and the Creek Don’t Rise, which won the Grammy Award for Best Folk album. He went back to acoustic guitar for “Such a Simple Thing,” then electric for “In My Own Way.”

Stream Part of the Light by Ray LaMontagne on Spotify:

Before “Jolene,” Ray addressed the audience. “If I can’t get lost in the music,” he said, “it’s not a very good song. So I’m just going to keep my mouth shut.” Ray explained that his demo for “It’s Always Been You” differed significantly from the album cut.” It “just didn’t sit the way I thought it did” when he went to record it. In studio, he tried it out on the mellotron and everything came together. On Tuesday evening, Ray played the demo version of the song, with Carl on acoustic.

Ray stayed with his acoustic guitar for the three songs: “You Are the Best Thing,” “Sarah,” and “To the Sea.” On the penultimate song of the set, “Rock ’n’ Roll and The Radio,” Ray played harmonica and Carl played the pedal steel. Carl swapped out for his electric guitar for the last song in the set, “Forever My Friend.”

The audience awarded Ray with a standing ovation as he left the stage, and he returned with Carl for his encore. With Carl on electric guitar, Ray played “Let’s Make It Last.” He sent the crowd home with one last song, this time with Carl on pedal steel.

Catch up with Ray LaMontagne on tour by visiting his website.