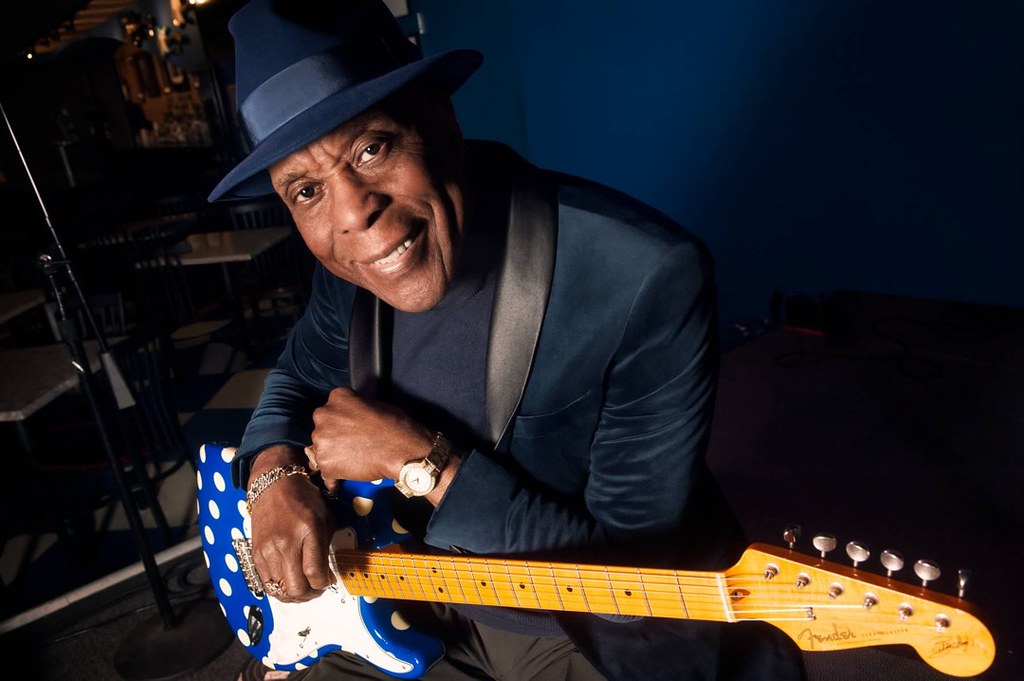 “Don’t let them goddam blues die,” Muddy Waters once told Buddy Guy. That was over three decades ago, but the eight-time Grammy award-winning blues guitarist and singer hasn’t forgotten. Buddy spent a recent night reminding fans at The State Theatre in Falls Church that the blues are very much alive.

The unpretentious setting was perfect for a night of unapologetic Chicago blues. The theatre was built in 1936, which was also the year that Buddy Guy was born. The venue, like Buddy, represents a bastion of authenticity.

Buddy began the Oct. 14 show with a display of why Eric Clapton has called him the greatest guitar player ever. “Did I play that too loud,” he asked fans. Cheers answered the rhetorical question. “I’ll play something so funky you can smell it,” he continued.

It not only got funky, but downright nasty as Buddy and his incredibly talented band performed blues classics like “Hoochie Coochie Man,” “Boom Boom,” and “Cheaper to Keep Her.”

“I’m a king bee, buzzin’ around your hive/Well, I can make honey, baby, let me come inside,” Buddy sang. He then stopped midsong to explain the seemingly unseemly lyrics from Slim Harpo’s “I’m a King Bee.” The song is about a cheating pair. The philandering “king bee” wanted to be let in the house. Now really, what did you think it meant?

Stream The Blues Is Alive and Well by Buddy Guy on Spotify:

We now live in a time where many musicians leave little to the imagination, but it wasn’t always that way. Early Blues artists were masters of weaving sexual innuendos and double entendres into their lyrics. Buddy spoke on this point, and how if you trace the roots of hip hop, you’d find your way back to the blues. The statement easily applies to most music genres.

“Blues had a baby and named it rock and roll,” Muddy Waters famously sang. On “Cognac,” Buddy gave the audience some rock-a-blues as he pulled his guitar to his chest Jimi Hendrix-style. He would also play the guitar behind his back and whip a towel across the strings as he worked his fingers across the frets. The audience couldn’t get enough of Buddy’s showmanship.

The Chicago Bluesman slowed things down a bit during his performance of “Feels Like Rain.” “Down here, the river meets the sea/And in the sticky heat I feel ya’ open up to me,” he sang. He then encouraged fans to sing along to the chorus. Shortly after that, he asked the house lights to be turned on, so he could see (as he put it) “who’s fucking this up.” The audience roared in laughter.

Buddy Guy is synonymous with Chicago blues, but like many other blues greats, his origin story begins in the Delta. “I didn’t know what running water was until I was seventeen,” said Buddy about his upbringing in Lettsworth, Louisiana. His affinity for his hometown became apparent as he told the audience tales from his childhood — back when you could buy a guitar for $3 and some change.

“They don’t play this type of blues on the radio anymore,” he said before performing “Got My Mojo Working.” Not only is that a shame, but it should be a crime. Nonetheless, Buddy’s performance and the audience’s enthusiasm made it clear that you need not worry about the blues. The grit and the funk will continue to thrive as long as we have artists like Buddy Guy.