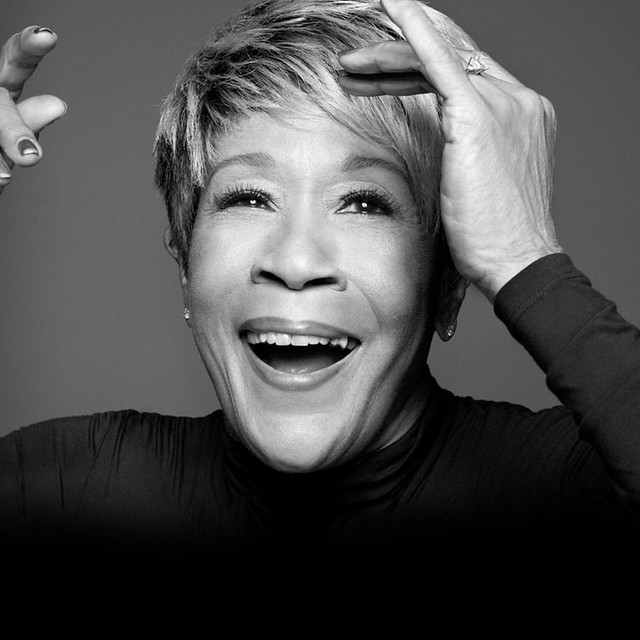 Five-time Grammy nominee Bettye LaVette got off to a rocky start when she opened for David Bromberg recently at the Historic Sixth & I Synagogue. After her first number, she pleaded for the tech to turn down the echo and reverb. With it its high ceilings — Bettye called the room a cavern — Sixth & I’s sanctuary provides its own echo. As Bettye remarked, with echo on her mic, it sounded a bit too much like “heaven,” and not in a good way.

Bettye’s second number, Denise LaSalle’s oft-covered “Someone Else Is Steppin’ In,” was much clearer. She introduced it as a “blues song [that] certainly didn’t come from heaven.” She added that “they won’t let me into” heaven.

Bettye has been in the music business for 57 years — 57 years ago, she released her first recording. She has had the unusual career arc that for some 40 years, she toiled in relative obscurity. Her 1972 album, Child of the Seventies, recorded at Muscle Shoals studios, was shelved, not being released — and then in limited quantity — until 2006. After not recording since 1982, she released A Woman Like Me in 2003, along with a memoir of the same title. Bettye shared the title track with Saturday’s audience as the penultimate song of her set.

Before she got to “A Woman Like Me,” Bettye spoke of leaving home at 16 to pursue her music career. Still fresh in her mind is the first the juke joint she ever went into. When she sings Buddy Johnson’s “Save Your Love For Me,” which played that very night, she imagines herself in a long black dress, smoking a cigarette.

Bettye declared “I’m not a singer,” but rather “I’m a song interpreter,” despite her sounding, in her own words, more like James Brown than Doris Day. Bettye has a deep, soulful voice, powerful, a bit throaty, over which she has full control. She has a voice for soul and the blues, and her interpretations have turned everything from rock to folk into highly emotional R&B.

Since her career relaunched in the early ’aughts, she said, “Record companies have afforded me the opportunity to record songs by the greatest songwriters.” Introducing George Harrison’s “Isn’t It A Pity,” she opined that the late Beatle “certainly had hope that things would be better by now.” Bettye followed Harrison’s song with one from the magnificent Tom Waits, “Yesterday Is Here.”

On her most recent album, Things Have Changed, Bettye interpreted 10 classic Bob Dylan songs. The record received a Grammy nomination for best Americana album. After she shared “It Ain’t Me Babe,” she commented on her lyrics sheets, “I’m not going to live long enough to remember all these lyrics.” When she was younger, she swore she’d never wear glasses on stage, but has had to recant, as she can’t see without them now. For her 73rd birthday, she added a stool to her performance contract. Poking fun at her age, she remarked that her keyboard player, Evan Mercer, is younger than her grandchildren.

Stream Things Have Changed by Bettye Lavette on Spotify:

In the ’60s, Bettye desperately wanted to appear on American Bandstand. All her friends and neighbors, she told the audience, made it on the show — but not her. She released “My Man – He’s a Lovin’ Man,” as a single in 1962, but, unfortunately, it didn’t take off. In 2000, she performed the song for her live album, Let Me Down Easy.

During the height of the AIDS crisis, Betty was working in theater. “I lost so many,” she said. She had the good fortune to contribute Bruce Springsteen’s “Streets of Philadelphia” to the album Songs of America, compiled by Janet Reno, who served as President Clinton’s attorney general.

Bettye finished her set with Kim McClean’s “The More I Search.” As she left the stage, she received a standing ovation. It was well-deserved: This is one of the very best opening acts I have seen. Bettye has a phenomenal voice, and her set choices perfectly complimented the main act, David Bromberg, who was performing (mostly) blues with a big band.

While the acoustics of Sixth & I’s sanctuary may not have been ideal, its sacred nature added a certain dignity and weight to the Bettye’s deeply spiritual incantations. Music writers often write about how a singer “took the audience to church;” in this case, Bettye LaVette took the audience to school, to synagogue. Don’t miss the opportunity to see Bettye perform live — it’s a profound experience guaranteed to be deeply moving.