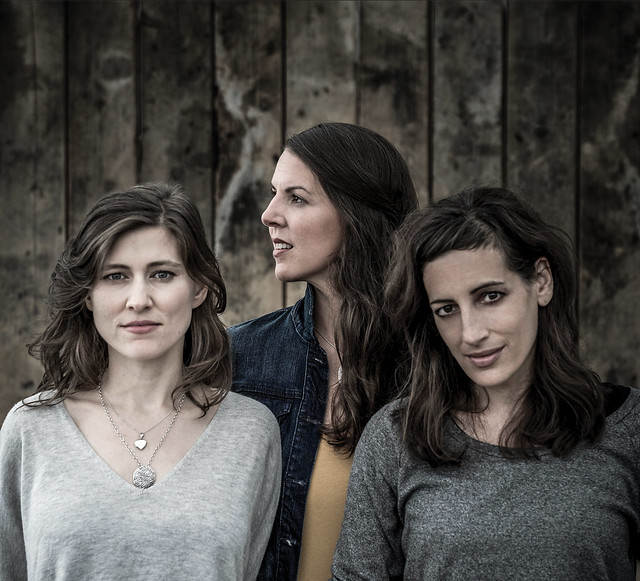 The Wailin’ Jennys opted to start Wednesday’s show — the second of three sold-out performances at The Birchmere — singing the traditional “Long Time Traveller” a capella. Over two sets, the trio, made up of Ruth Moody, Nicky Mehta, and Heather Masse, cycled through a number of instruments and styles: folk, gospel, a little country.

Except on their a capella numbers (the gospel-like, hand-clapping, foot-stomping “Storm Comin’,” second set-opener “Loves Me Like A Rock,” and their encore of “One Voice”), Heather played bass, and they were joined by two string accompanists, one of whom was Ruth’s brother Richard. Ruth and Nicky played guitar, banjo, a couple different types of drums, and even the accordion.

This set of three shows was The Jennys’ first after a yearlong hiatus. Heather had a baby, Ida Rose, who is now nine months old. The five previous children amongst the trio, it was noted, are all boys. Heather talked about having a home birth; Ida, she said, “came out screaming and cried for the next four months.” “It’s worth it,” said a man in the audience, “even the colic.” “It is,” agreed Heather, “she’s amazing.” Back in the spring, as the colicky stage was ending, she wrote “Ida’s Song.”

The audience took a little time to warm up. Before “Birdsong,” Nicky remarked, “Wow, you guys are quiet.” A few songs later, the audience was still thawing. “You guys are too quiet,” she said. “You need to drink more. You can be rowdy. We like rowdy.” That seemed to do the trick, and the audience started to simmer. One man in particular became quite vocal, which continued throughout the show — not in a rude or disruptive way, just showing enthusiasm.

When Nicky had just found out she was pregnant with her three-year-old, Woodson, she wrote “Spell of the Lilac Bloom.” She described “embarking on this journey I knew nothing about,” and how she was filled with excitement, but also with trepidation. It was raining, she told the audience, and the lilacs were blooming. Woodson, whose father is also a musician, “has lots of opinions. He challenges me daily.”

“I’ve never been a cowboy,” Heather told the audience, “but I find them very interesting.” She shared her seven-year-old son August’s endorsement of “When I Was a Cowboy:” he told her “you could play that in a show!” Heather invited the audience to join in on the chorus, the first of many times The Jennys got the crowd involved.

The Wailin’ Jennys have, as they mentioned, a tradition of premiering songs at The Birchmere, and Wednesday was no exception. Introducing her “I Tried,” Nicky spoke about her work with at-risk youth. One of her supervisors once told her, “Everyone is always doing their best.” She asked for the audience to be patient the growing pains of a new song, saying “I’m doing my best.” She then joked, “I don’t know about these guys.”

This led to a funny moment when The Jennys were finishing their first set with “Glorybound.” Ruth tried to get a call and response going, but after she sang the audience’s part to demonstrate, the response was tepid. (I felt like there was no way I could follow the note she hit.) At her disappointment, I exclaimed, “We’re doing our best!” which cracked up the audience and the band — Nicky even clapped in appreciation.

The Jennys titled their last record, an album of covers, Fifteen; they had been together that number of years. As of this coming January, it will be 18 years. From 15, they included Tom Petty’s “Wildflowers” in their second set, with Nicky playing guitar and Ruth playing banjo. This followed another cover, country legend Emmylou Harris and David Olney’s “Deeper Well,” which Nicky described as “a rocker.” They treated it as such, jamming out in their most intense playing of the night. In the first set, The Jennys covered Americana mainstay Julie Miller’s “By Way of Sorrow.”

Stream Fifteen by The Wailin’ Jennys on Spotify:

Toward the end of the first set, Nicky explained that they partner with local charitable organizations at all of their shows. In addition to the National Alliance on Mental Illness (NAMI), The Jennys were working with the District Alliance for Safe Housing (DASH). DASH provides a safe space for women and children to escape domestic violence, and it has space for 300 familiies. During the intermission, audience members could enter a raffle to win a set of the group’s CDs, and the winner was announced just before the last song of their second set.

It’s not hard to understand why The Wailin’ Jennys sold out three straight shows at The Birchmere. All three of these superbly talented women contributed songs to the mix. Between the originals and covers, the show had a little bit of a lot of different things, not just in terms of genre, but in the instrumental arrangements and the vocals. There’s something for everyone in what The Jennys do, and they do it well.