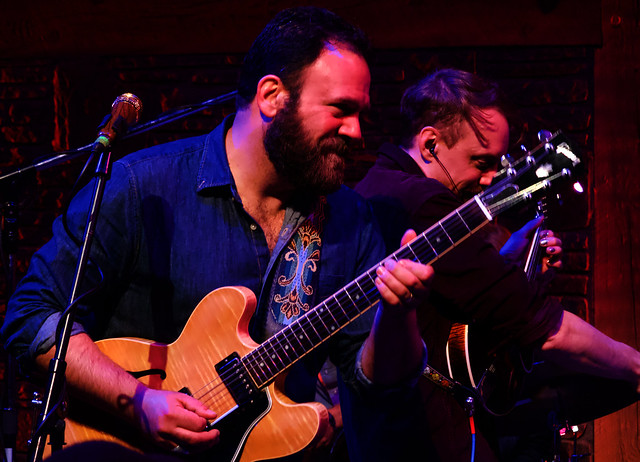 Baltimore’s own Cris Jacobs kicked off his set at The Hamilton Live recently with “Rooster Coop,” and there was indeed “something funky in the barnyard.” “Rooster Coop” perfectly captures the Cris Jacobs Band experience: it’s vaguely Americana, but with deep, funky R&B grooves. Cris is not the only artist to delve into “Americana soul,” as he calls it — Chris Stapleton’s style could be similarly characterized — but Cris also brings a jam band sensibility to the affair.

Cris likes to jam, and he gave his audience their money’s worth on Nov. 8. Some 90 minutes into the show, he started bringing out members of Midnight North, who performed earlier that evening. Cris first invited out Grahame Lesh, MN’s guitarist and the son of Phil Lesh, the legendary bassist for the Grateful Dead. Next came keyboard player and vocalist Elliot Peck.

A longtime fixture of the Baltimore music scene, Cris received widespread critical attention for his 2016 album, Dust to Gold. He was named one of Rolling Stone’s “10 Country Artists to Watch.” When Sturgill Simpson and Willie Nelson played The Anthem on Memorial Day weekend last year, Cris was tapped to open the show. Cris more than lived up to the big stage, thrilling the crowd and receiving a thunderous ovation.

On Friday, Cris played several tunes from that 2016 album, including “The Devil or Jesse James,” “Delivery Man,” and “Jack the Whistle and the Hammer.” Grahame provided vocals on “Turn to Gold” and “Bone Digger.”

Stream Dust to Gold by Cris Jacobs on Spotify:

“Rooster Coop” came from Cris’s follow-up to Dust to Gold, Color Where You Are, released earlier this year. Cris played most of the songs from the album: “Painted Roads,” “Under The Big Top,” “Buffalo Girl,” “Afterglow,” “We’ll Act Like Strangers,” “Holler and Hum.” Elliot sang vocals on “Night Bird.”

Cris’s instrumental talents extend beyond the electric guitar. About halfway into his set, he took a seat and wailed away on the lap steel. On either instrument, he displayed flourishes, improvising and churning out muscular solos. For all the emphasis on instrumental work in his music, Cris has a clear, husky voice, and his phrasing is excellent. His vocals are never muddied, but rather consistently easy to understand.

Make some time to explore the music of Cris Jacobs. For more info, visit his website.