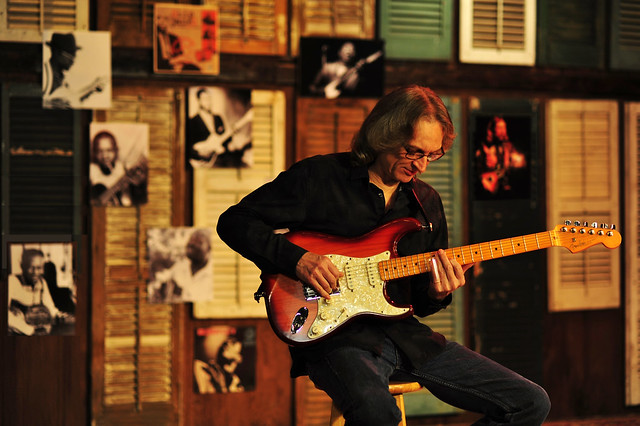 Americana is often looked at as a singer-songwriters’ genre, but any number of fantastic instrumentalists have contributed to the field. Two of the best guitarists in Americana, Sonny Landreth and Cyndi Cashdollar, brought the audience at City Winery to a hushed reverie recently with a set of electric/acoustic duets. Sonny paired his electric guitar, as well as his vocals, with Cyndi’s dobro (a form of resonator) and lap steel guitars, for a performance that was, as Cyndi said, “just like in your living room.”

Cindy and Sonny are well-known and frequently sought-out collaborators who’ve contributed to the work of many artists. Cindy came to attention as a member of Western swing revivalists Asleep at the Wheel, and she has worked with — to name just a few — Bob Dylan, Van Morrison, and Ryan Adams. Sonny has recorded with Dolly Parton, Mark Knopfler, and Jimmy Buffett; Eric Clapton has called him one of the most advanced guitarists in the world. In August 2018, he appeared at The Birchmere with John Hiatt.

Born and raised in Mississippi, Sonny now makes his home in Lafayette, Louisiana. His music contains the multitude of tributaries that run into the river’s delta, combining the traditions of white settlers and the sounds of the African diaspora: Cajun zydeco from the bayous and the blues of sharecroppers. On Nov. 7 at City Winery, Sonny and Cyndi covered blues classics including Muddy Waters “Walkin’ Around,” Elmore Leonard’s “It Hurts Me Too,” and Bill Bridgey’s “Key to the Highway,” which Sonny referred to as his personal theme song. “Prodigal Son,” written by Robert Wilkins, was famously covered by the Rolling Stones.

Stream Recorded Live in Lafayette by Sonny Landreth on Spotify:

Cyndi brought a bluegrass influence to show, dedicating a song to Josh Graves, who played dobro with Flatt & Scruggs. She has a new solo album coming out in January, and it features a number of guest artists, including Sonny.

Sonny displayed a good humor about his under-the-radar status, joking about his “Creole Angel” being “a hit in Poland in 1997.” The Cajun theme ran through the last piece of the evening, “Back to Bon Teche.” “All About You,” he quipped, was “indeed about each and every one of you.” “Congo Square,” he remarked humbly, has been covered — and done better, in his opinion — by others. Sonny included a new tune, “Blacktop Run,” in the evening’s entertainment.

As one member of the audience commented, Sonny’s voice has lost none its quality with age. And for magic on the guitar, it’s hard to find anyone better than these two aces.

For more music from Sonny Landreth, visit his website!

And for more music from Cindy Cashdollar, visit her website.