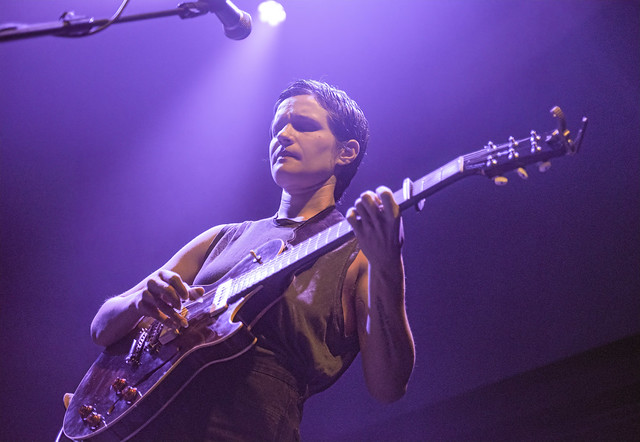 And speaking of this past year, the band put out two full-length LPs this year (and the year’s not even over yet!): U.F.O.F. and Two Hands. And although the second of the pair came out just a few month later it is by no means extraneous. Where U.F.O.F. brought out more of the intricate folk-tinged post-pop that Adrianne’s solo album, abyskiss, highlighted, Two Hands songs have an immediacy that feels familiar but exciting.

I’ve had the pleasure of hearing some of those same songs as Big Thief has road tested a few of those songs over the past year or two. The one I remember hearing was the song that became “Not.” I remember it as being a slower number, but hearing it again at the 9:30 Club and how it ebbs and builds into a wail of guitar at the end is powerful.

Throughout their set, the band kept focus on each other as Buck Meek (guitar) shucked back and forth to the groove, Max Oleartchik (bass), and James Krivchenia (drums) locked on that same groove watching each other intently. And as Adrianne went from the fury of “Not” to the steady beat of “Mythological Beauty” and then to the smooth and delicate “The Toy” the crowd was swept along on her journey.

There was a new song that I can’t recall from previous shows called “Sparrow” leaving hope for even more new material in the very near future. Closing out their set before the encore was, again, one of my favorite of all time, “Mary.”

The band did come back for an amazing encore of another one that I’ve seen performed a few times before called “Spud Infinity” along with a massive version of “Magic Dealer.”

Here are more photos of Big Thief performing at the 9:30 Club on Sunday, Nov. 10, 2019. All photos copyright and courtesy of David LaMason.