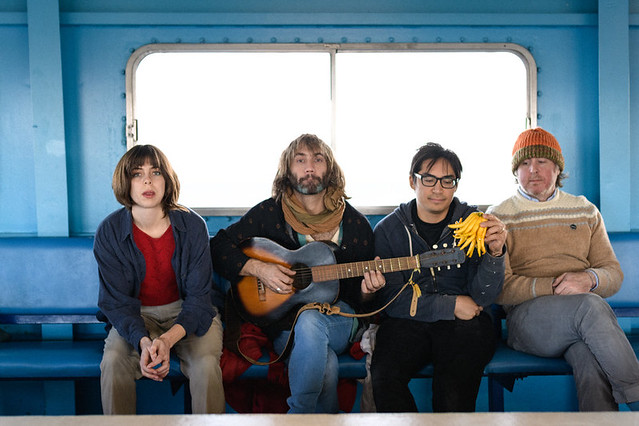 Haunting. Spectral. These are a few words that describe the folk-Americana of The Low Anthem, who appeared at Jammin’ Java recently. Following a switch to the Joyful Noise label, TLA has released a limited-edition vinyl pressing of their 2008 album, Oh My God, Charlie Darwin. They played the entire record, described as a “very sciencey gospel” album, along with some newer material.

Brown students Ben Miller and Jeff Prystowsky started TLA in Providence, Rhode Island, in 2006. As many of the members of the group have gone on to other projects, he was accompanied by a violinist/vocalist and a harmonica player. This tour is TLA’s first in several years, and its first time at Jammin’ Java on Nov. 21.

TLA began with “To Ohio.” “Ticket Taker,” Ben explained, is about a man who worked in Hollywood films and moved to Humboldt to grow weed. He then grew paranoid, starting work on a shelter. He believed that, when he completed the shelter, his perfect person would come to him.

Ben switched on the echo for “The Horizon Is a Beltway.” With only violin playing, and a long introductory solo, he sang Jack Kerouac’s “Home I’ll Never Be.” Ben characterized “Cage the Songbird” as “pretty hopeless.” The song, he explained, is about Darwin’s finches.

Stream Oh My God, Charlie Darwin, by The Low Anthem on Spotify:

“This is where the record flips,” Ben declared, before taking an excursion to more recent material. TLA based its most recent album, the concept album, 2018’s “The Salt Doll Went to Measure the Depth of the Sea,” on a Buddhist myth. TLA played “Give My Body Back,” and Ben joked, “I’d like to thank the lovely folks here at Petco.” After “Toowee, Toowee,” he related a humorous anecdote about accidentally booking a show in the other Vienna (Austria), which had to be cancelled.

Returning to OMGCD, TLA played “Don’t Tremble,” a song written to ease some of Ben’s friends’ worries. They recorded “Champion Angel” in Block Island, Rhode Island, the night of the 2008 Iowa Caucus. Block Island, Ben told the audience, is the size of Manhattan but is barely populated. The engineer for the session, a big Barack Obama fan, kept running to check the TV between takes. Ben wanted to express his skepticism about people who get up on stage and say they’re going to help you; he believes that they are, first and foremost, trying to help themselves.

Jocie Adams, who Ben said has a “great mind for music,” wrote “Music Box.” (Jocie has her own band now, the well-regarded Arc Iris.) “Music Box,” an instrumental, began with the playing of a music box, and the violinist joined in on the keyboard. “To the Ghosts Who Write History, which TLA sold to Bank of America for a commercial, followed “Apothecary Love.”

For the first time, TLA performed “OMGCD” live. Ben said that his “mother asked him to play it at her funeral. So it’s just as well we get some practice.” He joked that the lost song of his set, “Charlie Darwin,” made the band rich. In his last remarks, Ben spoke to the importance of “getting music into your heart.”

Ben returned to the stage alone for the first song of his encore, “I’ll Take Out Your Ashes.” The rest of the trio came back to the stage for “Ghost Woman Blues” to close the show. The audience, which had most certainly put music in its heart Thursday, rewarded TLA with a standing ovation.

For more of The Low Anthem, visit the band’s website.