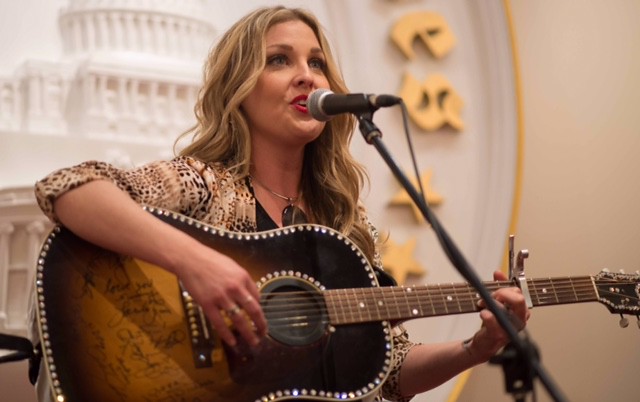 On Dec. 15, Sunny decided to open the show with a drinking song, seeing as they were performing at a winery. Sunny co-wrote “I Drink Well with Others” with Erin Lund and Gary Nicholson. Brennen contributed the next song, “John Deere No. 9,” about the first time her father drove a tractor when he was growing up in North Dakota — he was only eight years old at the time!

Sunny explained that she and Brennen have differing political views. She poked fun at that with “But You Like Country Music,” which joked about growing pot in the backyard and too much Fox News. “One of us is always in our safe zone,” Sunny said. “Never both.” Regarding the next election, Sunny said she plans to write in Merle Haggard for president.

In July, Sunny and her road crew rescued a cat in Baton Rouge, Louisiana. Her friend John, who booked the show at City Winery, adopted the cat and named him Sonny Sweeners. Sunny got to see her little buddy on Sunday — a happy reunion.

The first Christmas song of the song evening was co-written by Brennen’s partner, Noel McKay, and Becky Warren (who we covered in May). The refrain went “Merry Christmas asshole, you’ve ruined another year.” A typical holiday song, obviously.

Somehow, Brennen and Sunny got to telling a story about a friend of theirs who dates strippers. One of these ladies, they said, had not one, but two misspelled tattoos: instead of “persevere” one tattoo read “preserve,” while another, which was supposed to say “100% angel,” reads “100% angle.” Hey, there’s a lot of geometry in pole dancing!

After “Better Bad Idea,” which Sunny dedicated to her friends Jim and Holly, she said, “We get kicked out of joints like this usually.” Brennen followed with “Analog,” which can be heard on the SiriusXM station Bluegrass Junction. She explained that she was playing it more as a hillbilly jazz tune because she didn’t have banjo or fiddle to back her up.

Sunny talked about how much her dad had wanted her to go college. He told her she could do anything if she graduated college. She did graduate with a communications degree, then told her father on graduation day that she wanted to start a country band. Sunny said that this created friction between the two for a while, but he came around.

Another drinking song, “Drink Myself Single,” was followed by Sunny asking for more wine. “The joy of having a microphone,” she said, “is that I can order a drink from afar.”

In her teens, Brennen played music with her brother. Together, they wrote “The Bar Should Say Thanks,” about “getting kicked out of your favorite and, in true alcoholic spirit, demanding an apology.”

Somehow, Sunny got hold of Hank Williams Jr.’s phone number. One night in Omaha they decided — while drunk in a parking lot 2 am, to prank call him. Harley made the call, and when Hank answered, he asked him, “Hey man, how’d you make it out last night?” Six or seven seconds passed, then Hank hung up. He has since changed his number.

Sunny played “Blue Christmas,” made famous by Elvis. Brennen wrote “Merry Christmas from an Empty Bed” with Rodney Crowell, and they sang it as a duet on his Christmas Everywhere album, which was released last year.

Because she’s on the road so much — 250 or so dates a year — Sunny rarely gets to see her friends in the music business, as they tour just as much. Following a conversation with Cody Jinks and Ward Davis, she wrote “Poet’s Prayer.” She dedicated the song to Sam, saying that they both lost a friend this year.

Brennen mentioned how much she missed her dog. She rescued her dog, who she named Bjorn, off of a busy highway in Texas that is apparently a frequent dumping ground for unwanted pets.  Now recovered from being skinny and flea-ridden, the dog is now a “highly evolved spiritual being,” Brennen said.

Sunny has a 4-lb Yorkie that wears three cat bells. The bells, hopefully, will help Sunny avoid her great fear of stepping on the little dog. Currently, the Yorkie is staying with her mom; she’ll be getting it back in just a few days.

Somehow, a joke came up about writing a song called “Cat Farm” with Ray Wylie Hubbard (who we covered in September), punning on his delightful “Snake Farm.” Sunny turned to another country icon, “Merle Haggard,” for “If We Make It Through December.” Brennen followed John Prine’s “Christmas in Prison.”

Introducing the next song, Sunny ran down the four major themes of country music: drinking, leaving, lying, and cheating. “From a Table Away” addressed the last of those. Ending the show with a seasonal tune, Sunny played “One More Christmas Beer.”

I feel ready for Christmas now!