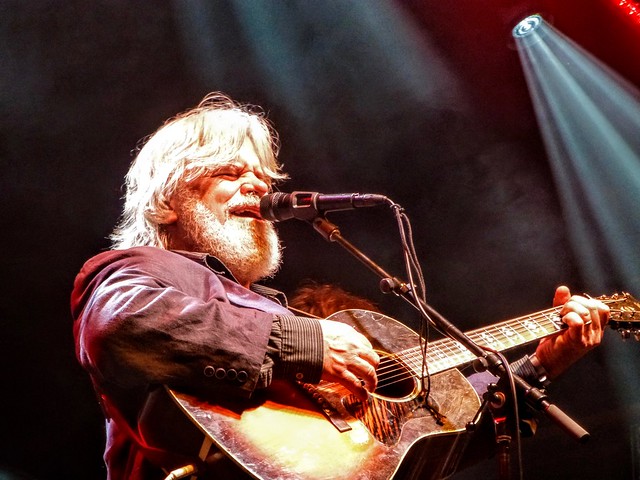 As the reading explained on Feb. 11, Vince is a powerful guitarist, but not an especially subtle one. While this is great for making the guitar audible against drums and other instruments, it is not ideal, the book admitted for bluegrass. Over the next several years, Vince and Drew remained in touch, both active, vibrant members of Boulder, Colorado’s musical community.

When I interviewed Vince recently, he told me that Leftover Salmon was born from the merging of the Left Hand String Band and the Salmon Heads for a show on New Year’s Eve 1990. Though they hadn’t planned for a long-term arrangement, things clicked, and Leftover Salmon went on to establish itself as a unique presence on the jam band circuit, playing festivals like Horde.

After the reading, Vince and Drew took their seats on the stage. Vince joked, “it’s such an honor to have someone track down stories that just aren’t true.” Speaking of his fondness for DC, he recalled driving into town many years ago with a sign that read “Tooth Decay” hanging from the car.

Having played together for 30 years, Vince and Drew have an almost telepathic link that allows them to follow each other through flights of improvisation. The treated the audience to a mix of original Salmon tunes and covers, beginning with Lightning Hopkins’s “Blues in a Bottle,” followed by “Lonesome Road.”

Before “Little Liza,” Vince asked Drew, “What you got in that mandolin over there, brother?” Anything I haven’t heard yet?” Introducing “Gold Hill Line,” Vince mentioned that it was about a town outside of Boulder at an elevation of 8000’ feet where gold had been discovered.

The duo took a left turn into a parody of “Tennessee Stud” called “Idaho Spud.” Though I would not be surprised if the tale were apocryphal, Vince claimed that a verse about radioactive potatoes had persuaded that state’s governor to decline to host a nuclear waste dump, which was built, instead, in New Mexico. Another humorous cover, “A Chicken Ain’t Nothin’ But a Bird,” followed.

They got more serious with the next song, “Woody Guthrie,” which bears some lyrical similarities to Steve Earle’s “Christmas in Washington.” But they didn’t stay serious for long. Vince told a story of how, when he was 19, he got to spend time with fiddler Dewey Balpha, one of the great Cajun music players. He recalled dancing with Dewey’s daughter Christine as she whispered French in his ear. Later, Christine would make an entire album of triangle music — nothing but triangle. Vince punned on how he used to date a triangle player, but it didn’t work out: “It was just one ting after another.”

Stream 25 by Leftover Salmon on Spotify:

The next song was a demonstration, Vince declared, of his “best fake French.” After “Morning Sun,” they gave a shout-out to local public radio station WAMU, where they had played that morning. “Bad Bad Man” got a rousing cheer from the crowd for its criticism of President Trump and its call for unity, and the audience clapped along to “Brand New Good Old Days.”

“Welcome to the John Hartford portion of the show,” said Drew, and the duo launched into “Steam Powered Aeroplane.” An extremely influential figure in American roots music, Hartford wrote “Gentle on My Mind,” which was a huge hit for Glen Campbell. Vince and Drew also played his “In Tall Buildings,” a sad song about moving to the city from the country.

After the traditional folk ballad “Shenandoah,” the duo opened the floor to requests. Riffing on the crowd response, they played a snippet of the Sex Pistols’ “God Save the Queen” — bluegrass style. They wrapped up their set with “This Is the Time” and a medley of “Let in a Little Light”/“It Must Have Been the Wine.”

The crowd, which had been enthusiastic all night, rose and cheered for Vince and Drew to return to the stage. They obliged and came back to perform “Mama Boulet.”

These guys were absolutely wild. Something prompted me to call out a question to the duo about whether they knew about the early 20th century plan to farm hippos for meat in the Louisiana Bayou. Without missing a beat, Vince proceeded to tell the story of how he went to a Toys ‘R’ Us opening in Lawrence, Kansas, wearing a hippo mask, a red union suit, and Hawaiian shorts. He wasn’t the only one in costume. A guard approached, asking him who he was with, to which he replied that he was a “freelance character.” The guard said it was fine for him to wait and go in the store, but asked him not to talk to any of the children.

A good time, a wild time, a fun time!