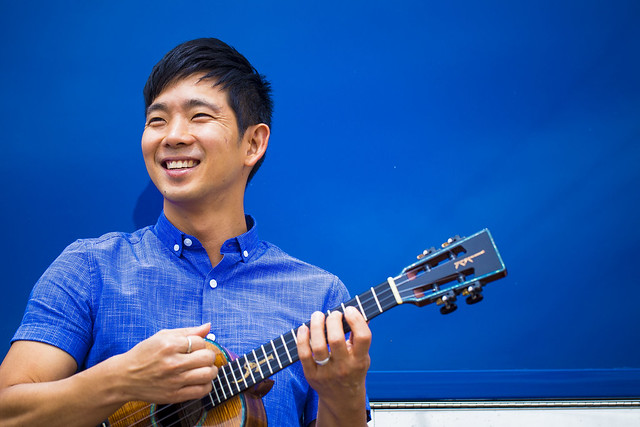 On Feb. 13, Jake began his set alone on stage with his ukulele, which he plays in ways you never imagined possible. He dedicated his second number to “all the ukulele players who played in the lobby — make some noise!” A huge Beatles fan, he treated the audience to covers of “While My Guitar Gently Weeps” and “In My Life.” As he finished the latter, he growled “all the colors of the rainbow,” then quickly added, “Just kidding!”

A fifth-generation Japanese American, Jake is fascinated with that nation’s folk music. When he was in Japan, he was quite taken with the sound of the koto, a 13-string harp. His composition “Sakura, Sakura” (“Cherry Blossom, Cherry Blossom”) is his attempt to make his ukulele sound like that instrument. While I can’t claim familiarity with the koto, the tune certainly had a Japanese flavor.

Jake drew on an immensely varied range of influences in his music. In addition to pop and world music, he’s also a student of traditional American sounds. Bluegrass influenced the writing of “Orange World.”

His next number was a traditional Hawaiian tune, “Wai’ alae,” which has been covered by the Sons of Hawaii and Israel Kamakawiwoʻole. Introducing the song, he talked about how he opened for the Side Order Band in Japan in the ’90s. At the time, he was playing very experimental music, using pedals and effects to modify his ukulele sound. When he opened for the Side Order Band, though, it just wasn’t the right setting for that, and it served as a reminder to balance out the experimental with the traditional.

Jake began to bring out his band, starting with guitarist Dave Preston. Together, they played “Ichigo Ichie.” The Japanese phrase translates to “once in a lifetime,” but, as Jake explained, there’s more to it: it conveys a sense of coming together, of gathering as family and community. He likes to think about how, each night on the road with a new audience, is “once in a lifetime” in this very special sense.

Jake has two records arriving in 2020. One, entitled Trio, is just that: Jake playing with his guitarist and his bassist. Jake and Dave followed “Ichigo Ichie” with a composition they write together one midnight, after they’d been working in the studio. Next, they were joined by Dave’s wife, Rachel, a vocalist and Dave’s collaborator in the country/folk band Dearling. Together, the three of them covered Fleetwood Mac’s Landslide.

Dave provided vocals on James Taylor’s “Carolina in My Mind.” Jake told the crowd that this year’s second album, due out in October, is a “friends” album, with guest appearances by folks like Willie Nelson and Bette Midler, who sang on “The Rose.” Rachel stood in superbly for the Divine Miss M.

After “The Rose,” Rachel left the stage, and Jake’s bassist came out. This bassist was relatively new, having replaced Nolan Verner, who wanted a break from life on the road to spend time with his family. The trio played Jake’s original compositions “When The Masks Come Down,” “Summer Rain,” and “12,” which is based on contemporary classical 12-tone compositions.

Jake had the chance to work with Alan Parsons, one of the producers on Pink Floyd’s “Dark Side of the Moon.” (Parsons was also behind the Alan Parsons Project, whose instrumental “Sirius/Eye In The Sky” may be familiar, having been played during the announcement of the Chicago Bulls’ starting lineup at home games during the ’90s, as well as serving as the walkout music for legendary professional wrestler Ricky “The Dragon” Steamboat in the mid-late ’80s.) As a tribute to Alan, Jake likes to perform “Wish You Were Here.”

As a kid growing up in Hawaii, Jake was a huge fan of Bruce Lee. He joked, “What was Bruce Lee’s favorite drink? WATAH!” He took the title of “Dragon” from his favorite Bruce Lee movie, the classic martial-arts film Enter The Dragon.

To wrap up his set, Jake invited the crowd to sing along on Queen’s “Bohemian Rhapsody.” With a little prompting at times, they really got into it. Rewarded with a standing ovation, Jake agreed to do one more song, and sent the crowd home with a traditional Hawaiian folk tune. Unusual for shows at the Strathmore, both Jake and the opening act, mandolin virtuoso Sierra Hull, signed merch for fans after the show.

Jake is a true virtuoso; he does things with the ukulele that you would never believed possible with the modest instrument. The set was full of variety: solo pieces, instrumental band numbers, and covers with vocals. Jake has a warm, pleasant personality, and the evening was relaxed and fun.

For more music and tour dates from Jake Shimabukuro, visit his website.