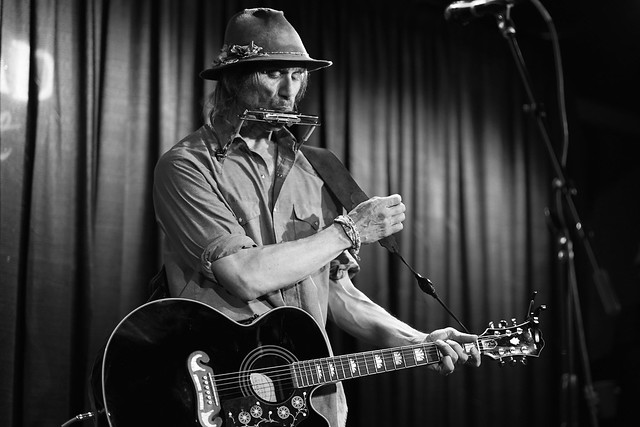 Cautiously emerging from the dressing room, stepping wide-eyed onto the stage at the Rams Head on Stage recently, he seemed unsure if he was even supposed to be there. Or maybe he was given pause by the full venue, either way, the audience might have wondered for a second what was going on.

But as he settled into a couple notes on the guitar and began to blow the harmonica, if tears hadn’t already started to well in their eyes, attentive onlookers were already able to decipher the genius that is Todd Snider.

A perplexingly lovable, rough-around-the-edges rambler, Todd has certainly been around the block and his vast experience in life — all of it, the pretty and the ugly — came through in the book of songs he’s created that have earned prominence as one of the country’s most dynamic lyricists.

Todd was born in Portland, but his family moved to Houston when he was still a kid. He would later return to Oregon, along with a friend, as a runaway. He wanted to play the harmonica and, upon moving to California for a spell, discovered Jerry Jeff Walker performing live in a bar. Instantly, he was inspired to perform, even if solo.

With a fortuitous connection later on in Memphis to Keith Sykes, a member of Jimmy Buffett’s band who ran in the same circle as his idols like Walker and John Prine, Todd would find his avenue and friendships that eventually led to him opening for Prine on the road.

Over the course of a career now spanning four decades, the 53-year-old has released more than a dozen LPs, plus a few live albums, carrying on the tradition of artists like Walker as well as Ramblin’ Jack Elliot by forging a lonesome breed of Americana with bittersweet songwriting in a style that is admirably his own yet relatable at the most human level.

Rising to popularity in the MTV era with the hit song “Alright Guy,” Todd has over the years become one of the most respected artists in folk music by honing his textures and sounds on his albums and as a solo artist — a poignant blend of his scraggly voice, the heavy wind of his harmonic and the gifts of his strumming and picking.

Todd’s a rebel at heart, and even some of recent recordings carry the same social misgivings and a scrutiny of capitalism, religion, corporations, government, education, even the music industry that you can hear in his records from the 1990s and early 2000s.

He visited Rams Head on Stage in Annapolis on March 1 for an intimate, poignant night of entertainment as part of his current tour that brought him to the DMV for a pair of shows in the past week. (He also appeared at The Birchmere on March 8!)

“I’ve played this place in every way you can imagine,” he cracked to the Rams Head crowd as he took them through a slice of his songbook that cast a light on his triumphant lyrics and song compositions.

Combining knee-slapping storytelling with a raw delivery and a crisp sound from his Epiphone guitar, Todd had the crowd’s full attention early in his set as he went through classics like “Tillamook County Jail” and “The Ballad of the Kingsmen,” a mind-bogglingly hilarious and touching commentary on societal misinterpretation and overreaction to popular culture. In person, the harmonica on this classic rang out as remarkably impassioned, the subject perhaps more appropriate than ever.

“Talking Seattle Grunge Rock Blues,” a secret track on his 1994 premiere Songs for the Daily Planet and a playful poke at the rising alternative music scene, drew cheers at Rams Head as Todd delivered it in campfire fashion, the lyrics quipped in between metered strumming to give himself time to improvise words that have twisted over time to include more contemporary references.

Self-deprecating out of the gate, some of Todd’s songs feel culled from some of the goofiest sagas imaginable, as if his life has been one wild and wasted barroom scene after another. Along the way, his anecdotes included tributes to Walker, Buffett, and Prine

“The Ballad of the Devil’s Backbone,” a jaw-dropping, rip-roaring tale that speaks to Todd’s love-while-you-can, worry-about-it-later view on life, the tune also didn’t mix words by criticizing narrow-mindedness that seems to be a growing issue today.

The striking contrast of Todd’s music, he interspersed more colorful pieces with some of his heartfelt work, like “Carla,” a plunking guitar number that details with mournful lucidity the suffering caused by the slow death of a relationship: “Leaving me was one thing Carla. Why’d you have to leave so slow? I didn’t mind you walking away, what hurt was how you walked so slow.”

A soul-soothing nomad’s jingle, “Play a Train Song” is arguably one of Todd’s most beautiful songs, and fans were delivered a stark, stripped down version of the song that highlighted the delicate sorrow you hear echo in his songs. The song’s second chorus registers with a heartache that feels addictively rewarding: “Play a train song, pour me one more round. Make ‘em leave my boots on when they lay me into the ground. I am a runaway locomotive, out of my one-track mind.”

Another all-time-great bar room story and a Snider standard, “KK Rider,” was a request all night, and he honored it just before the close of the set. The wanton insanity of this narrative, while it puts the listener in hysterics, only necessitates more respect for Todd as a songwriter and performer. Universal wisdom and highbrow humor presented through a simple man’s pitiful perspective, the brilliance of the composition really is best seen live, as it was at Rams Head.

Encoring with the hit single off 2019’s Cash Cabin Sessions, Vol. 3, Todd performed a warm edition of “Force of Nature,” which featured Jason Isabel on the album recording. Holding off with this song, his most popular recent release, until the end, he showed the depth of his portfolio, packed full of unforgettable words and sounds that, despite their handsome folk virtues, shine light on Todd’s influences and his love for so many different types of music.

Sadly, one of his more recent endeavors — Hard Working Americans — was put on hiatus last August following the death of Neal Casal, Todd’s longtime friend and a guitarist and songwriter respected throughout the music community.

Read Parklife DC’s review of Circles Around the Sun, the band formerly fronted by Neal Casal

And if there was more somber air than usual in Todd’s harmonica at Rams Head, or something in his demeanor, it might have been the aftereffects of another loss: his good dog, Cowboy Jim, passed away in late January after a long run as his closest companion.

Shaking it off and rolling with the punches, much as he has throughout his life, Todd delivered a world-class set of music, clearly a man with overflowing creativity to offer the songwriting craft.

Exact in his timing, executing rustic, extraordinary versions of originals ranging more than 26 years, Todd’s followers in the room could only hope he continues to record and to share his music, whether it’s via cozy solo shows, a full band tour or some new outfit that leans on his growing network of musician friends who cherish him and his powerful songs.

Encore:
Like a Force of Nature
Will The Circle Be Unbroken

Here are photos of Todd Snider performing at Rams Head On Stage in Annapolis on March 1, 2020. All photos copyright and courtesy of Casey Vock. 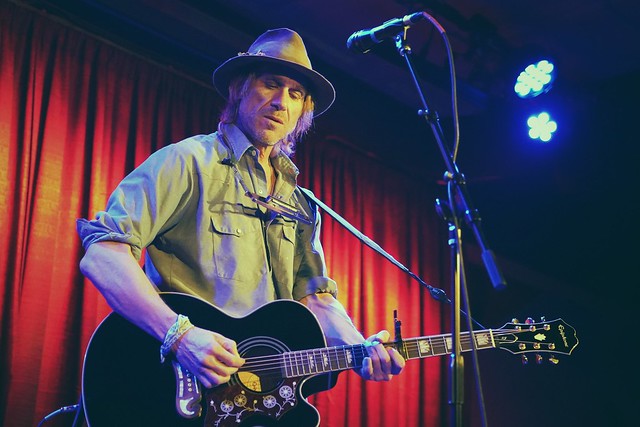 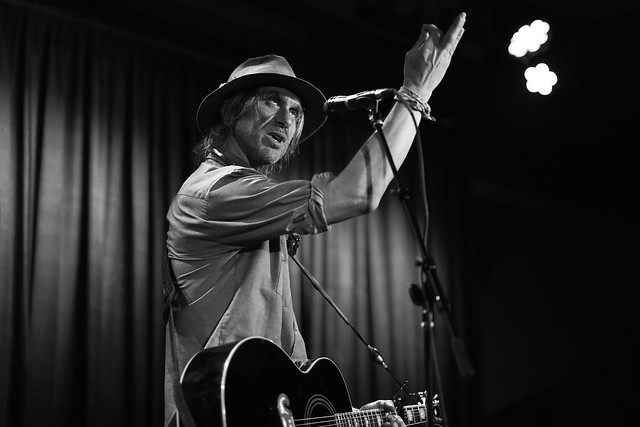 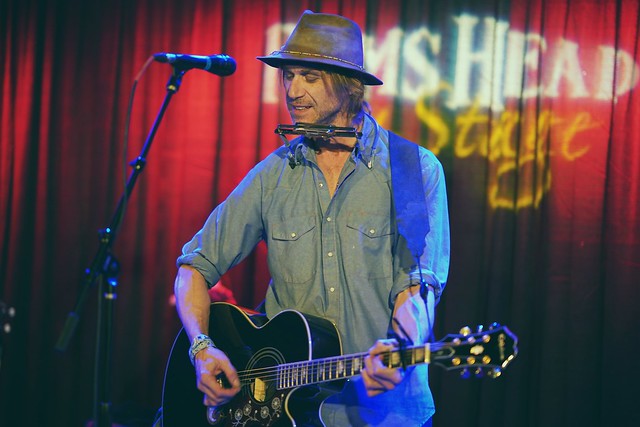 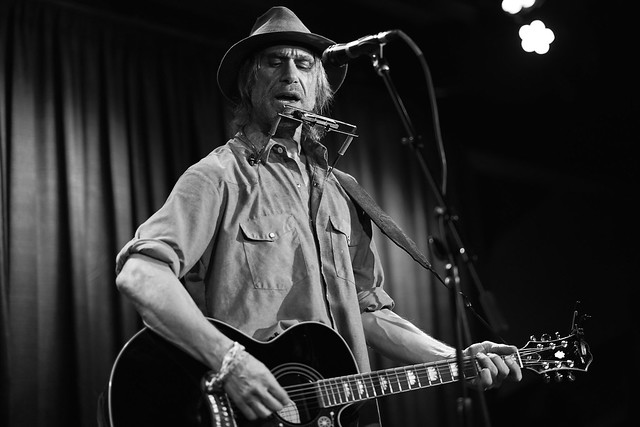 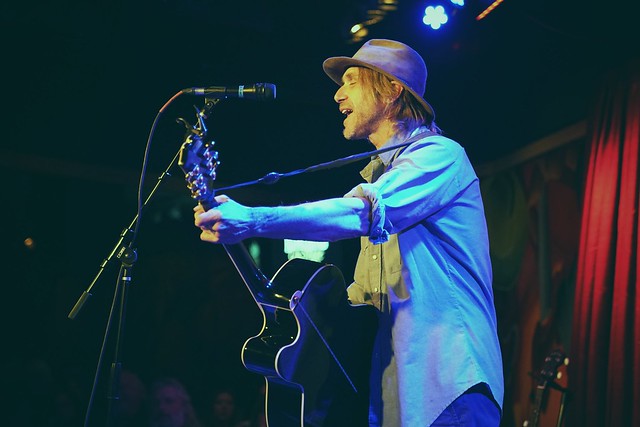 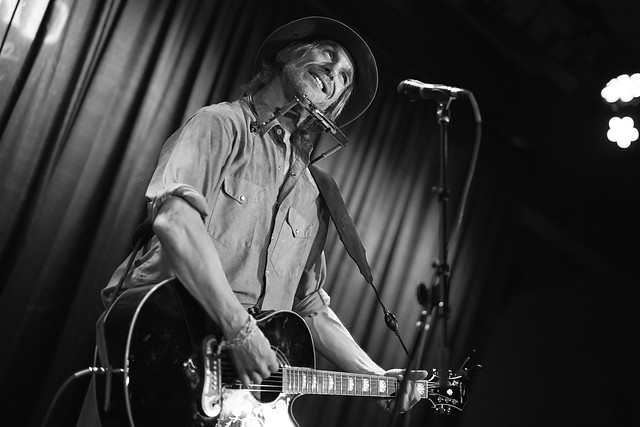 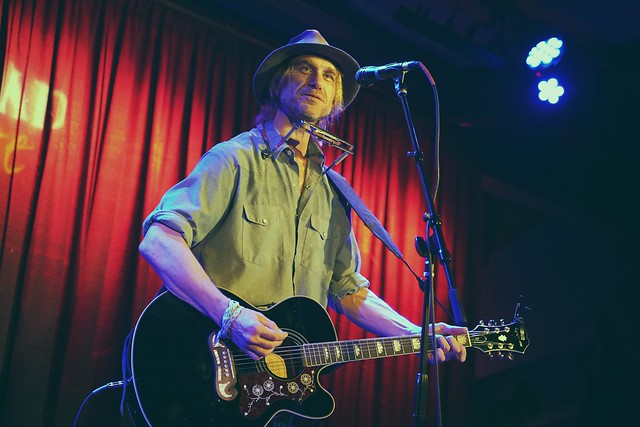 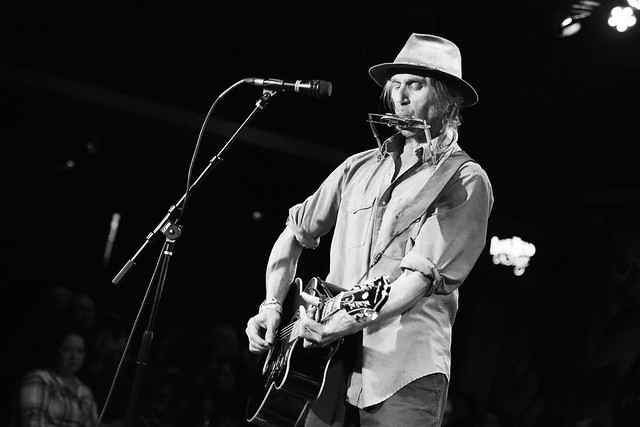 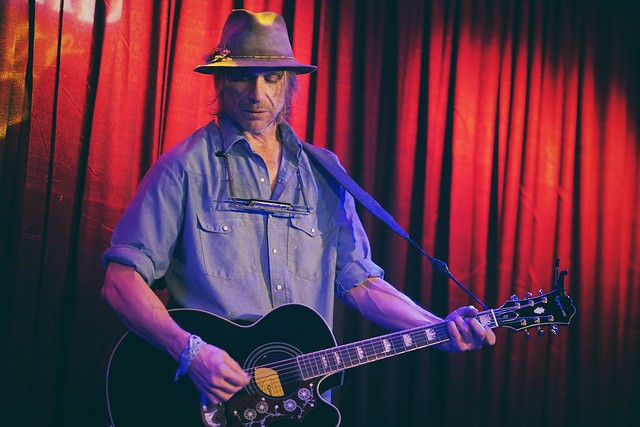