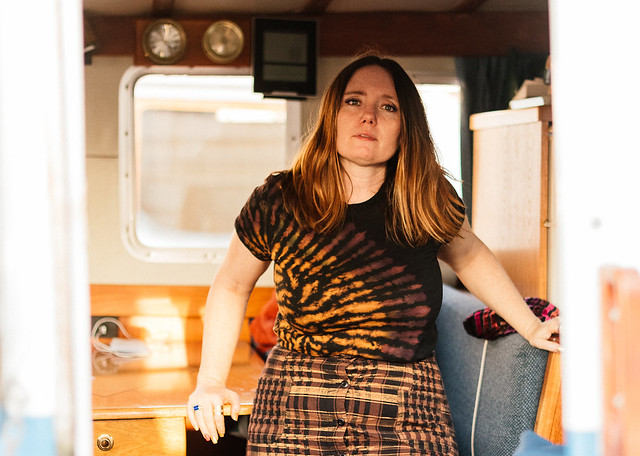 Frazey Ford is one of the most unconventional, eclectic singer-songwriters on the current music scene. When she appeared at the Pearl Street Warehouse on Halloween, she demonstrated her wide-ranging sound, unique vocals, and off-the-wall personality and wacky sense of humor.

Guitarist Phil Cook, who also played in Ford’s band, opened the show with a solo set. Cook, a native of Chippewa Falls, Wisconsin, has been based in Durham, North Carolina, for the last 15 years. He was a member of the psychedelic folk band Megafaun, and has played with Hiss Golden Messenger, The Blind Boys of Alabama, Bon Iver, and Kanye West. His own style draws on diverse influences: His set on Sunday night included a gospel number and ended with a cover of Randy Newman’s “Sailing Away.” Cook called the latter “a pretty damning perspective on the birth of this country,” adding that, while it was written in 1970, “it rings even truer today.”

When he took the stage on Oct. 31, Phil said, “it seems like a great day for trick-or-treating. The kids don’t have to have wear a coat over their costumes.” Where he grew up, in Wisconsin, that was often the case. He began the set with “Belong,” a cut from his 2015 album, Southland Mission. “1922” told a tale of hard times, hard work, and family farms.

Phil is open in interviews about the role of faith in his life and his music. After he played Washington Phillips’s “Take Your Burden to the Lord and Leave It There,” he spoke about how, earlier that day, he’d been at the Mt. Zion Baptist Church in Charlottesville, Virginia, and about the good work that it had done in healing the community after the violent clash that took place there a few years ago.

Last year, he told the audience, he made his first film, serving as producer on Stay Prayed Up, a documentary that follows Lena Mae Perry and the Branchettes as they prepare to record their first album. He dedicated “He Gives Us All His Love” to Lena. Between songs, he gave a shout-out to some relatives of Frazey in the audience. After “Steampowered Blues,” he switched to an electric slide guitar and played an instrumental, before closing with the Newman song.

On Nov. 19, Phil will release his latest album, All These Years, a collection of piano instrumentals recorded at NorthStar Church of the Arts in Durham.

Frazey Ford began her musical career as a member of the folk music group The Be Good Tanyas. The group, which also included Trish Klein and Samantha Parton (and, briefly, Jolie Holland), formed in Vancouver, British Columbia in 1999. Between 2001 and 2006, they released three albums, before pursuing their own, separate projects in 2007. Frazey released her first solo album, Obadiah, in 2010, followed by 2014’s Indian Ocean and last year’s critically acclaimed U Kin B The Sun.

Frazey opened the set with a joke, telling the audience there was a “program change. We’re going to include a bit of a murder mystery tonight.” She then launched it her first song of the evening, “Natural Law,” which, with its lack of a chorus, demonstrated her use of unusual song structures. She followed that with “If You Gonna Go.,” which sort of has a chorus, albeit one that falls at the beginning and the end of the song.

At this point, she noticed the TV on the wall above me. “I can watch myself,” she said, adding, “that’s weird.”

After “Money Can’t Buy,” she shared a wild idea that had been proposed by her backing vocalist, Grace, that would’ve seen the band donning Halloween costumes. Specifically, the idea was that Frazey would take the stage dressed as a cat, wearing a post-surgical cone, with a shaved patch with stitches. Unfortunately, the idea had to be scrapped for budgetary reasons.

“Let’s Start Again,” she told the audience, is “about the doomed relationships that you keep starting.” The next song, “U and Me,” also dealt with relationships, as did, to a certain extent, “Done.” She explained that, while it’s “a bit of fuck the patriarchy, I can’t tell you how many gay men have come up to me” to talk about that song. When she finished playing it, she mentioned that she was “having a flashback. We played on Halloween in the Be Good Tanyas days. There was one guy with one eye stomping behind the bar,” which she described as “creepy.”

Following “3 Golden Trees,” she played “Azad,” which is named after her sister, who she described as “a wild wolf child. I knew she would grow up to join the circus, and she did.” She also mentioned an incident in which Azad fought several men and won. Perhaps sensing that the name “Azad” might have struck some in the audience as a bit unusual, she said a bit more about her background, explaining that her parents were draft dodgers, and that she grew up on communes, where there was a “lot of acid.”

“Holdin’ It Down,” she said, was dedicated “to the matriarchy, but also to my brother.” Later, when she played “Firecracker” during her encore, she mentioned that he passed away two years ago. “The Kids Are Having None of It,” she said, “is about the next generation.” The set closed with “Lay Down With You” and “September Fields.”

When she returned to the stage for her encore, Frazey played “a song by my boyfriend DiAngelo,” followed by “Firecracker” and the title cut of last year’s album. It was an unusual, albeit compelling show, driven by Frazey’s decidedly off-kilter persona. There was also a bit during the show about how the band had an ongoing joke about replacing the word “girl” in song titles, which I mentioned was actually a long-running gag used in Ryan North’s excellent Marvel comics series, The Unbeatable Squirrel Girl. If you’d asked before me this show, I would never have thought that would come up at a concert.