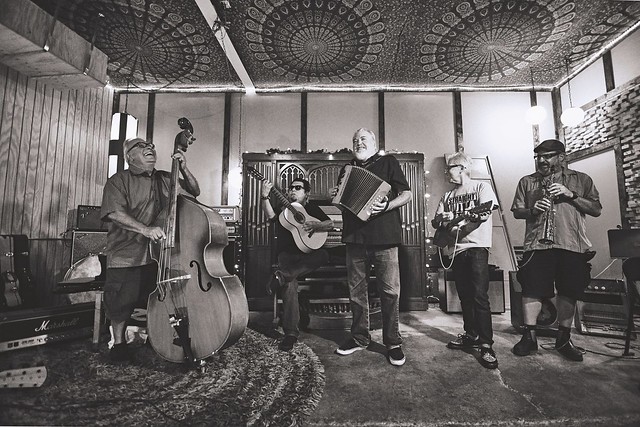 One of America’s longest-lived and best rock ‘n’ roll bands, Los Lobos, played the first evening of a two-night stand at City Winery on Thursday. Though they like to humbly refer to themselves as “just another band from East L.A.,” Los Lobos have been hailed by rock critics like Steven Hyden as one of America’s most underappreciated and important bands.

Their roots go all the way back to the early 1970s, with the meeting of Garfield High School students David Hidalgo (vocals, guitar, accordion, fiddle, requinto jarocho) and Louie Pérez ( drums, guitar, vocals). The band quickly expanded to include fellow students Cesar Rosas (vocals, guitar, bajo sexto) and Conrad Lozanon (bass, guitarron, vocals). The band’s final permanent member, Steve Berlin (sax, keys) joined after producer T-Bone Burnett brought him in to play on the band’s 1983 EP, …And a Time to Dance. The sextet was completed by touring percussionist Alfredo Ortiz.

In their early years, Los Lobos played acoustic Mexican folk music. In the 1970s, they first appeared on record as the backing band on Sí Se Puede!, a set of Spanish-language songs honoring Mexican-American labor activist Cesar Chavez. A few years later, they released Del Este de Los Angeles, which is considered be their first “true” album. Speaking to comedian and podcaster Marc Maron last summer, lead guitarist David Hidalgo explained that, at this stage of their career, they did a lot of cultural education work, often going into area schools. With the election of Ronald Reagan to the presidency, however, this work largely dried up, and this served as the impetus for the next stage of their career.

The 1983 EP …And a Time to Dance was a major step forward for the band, showing the breadth of their influences and just what they were capable of. Five of the record’s sevens songs were in English, and they showcased the band’s ability to write, as well as to interpret songs. Moving beyond the traditions of Mexican folk, their music crossed over into the burgeoning heartland and college rock scenes, and it showed their roots were eclectic, encompassing early rock, Bakersfield country, and R&B.

With 1984’s Will the Wolf Survive, Los Lobos took yet another step forward. For years, they had played all kinds of gigs, weddings, parties, etc. Here, however, their songs became something more ambitious, tackling social and political themes. While they did that, though, they never lost their ability to connect with an audience, something that’s still well-displayed in shows last Thursday’s evenings.

A few years later, they reached the apex of their commercial popularity when they were tapped to record songs for the biopic La Bamba, which told the story of early Chicano rocker Richie Valens. For this project, the band was personally selected by Valens’s widow. Their cover of Valens’s “La Bamba” (actually a traditional Mexican folk tune, putting it squarely in their wheelhouse) hit #1 on the pop charts.

While Los Lobos would never again reach the same heights of mainstream popularity, they’ve continued to make incredible records and thrill audiences for decades. They’re world-class musicians; David Hidalgo’s guitar work, in particular, is revered, and he is often mentioned in the discussion of guitarists who can do justice to the late Jerry Garcia. Across two dynamic sets, with material that included Mexican folks, polkas, original compositions, and covers, Los Lobos showed that, going on 50 years, they’re still a vital American band.

At City Winery DC on Nov. 18, the first set opened and closed with cuts from 1990s The Neighborhood — “Down by the Riverbed” and the title track, respectively — an ambitious album that explored their roots and themes of community. For their latter, the band drew the crowd into singing the refrain, “Thank you Lord for another day / Help my brother along his way / And please bring peace to the neighborhood / Grant us all peace and serenity.”

Stream The Neighborhood by Los Lobos on Spotify:

One of the band’s greatest assets is that it has three more than capable lead singers in Hidalgo, Rosas, and Perez, who were each featured during the show. The evening’s second tune, “Wicked Rain,” a cut from 1992’s Kiko, widely lauded as the group’s masterpiece had Cesar on lead vocals. In the second set, Cesar sang another track from that album, “Kiko and the Lavender Moon,” while Louie took over on the heavenly “Saint Behind the Glass.”

All three are also excellent songwriters; it was Hidalgo who wrote “One Time One Night,” as powerful a piece of Americana as any, for 1987’s By The Light of the Moon. This is a band that has never been afraid to have a distinctive voice and point-of-view, to express truths about who they are, where they come from, and the fabric of this country.

At the same time, they are decidedly a rock band, and one that can tear it up. After “One Time One Night,” Cesar said, “I hope we’re not too loud,” which elicited a strong “No!” from the audience. He then asked, “Should we turn it up?” to which the audience replied, with just as much enthusiasm, “Yes!” Without missing a beat, Cesar then introduced the first Spanish language song of the evening, “Chuco Cumbia,” which he said was “for your dancing pleasure.” One of the great things about a Los Lobos performance is that’s it always joyful, and there’s always dancing.

This past summer, the band released their latest album, Native Sons, on New West Records. As David explained, the album explores the various influences that informed Los Lobos growing up in East L.A., and they cover a variety of songs in a range of genres by artists and bands associated with their hometown. While some of those songs are well-known, like the Beach Boys’ “Sail On Sailor,” many are not, like Barrett Strong’s “Misery,” Thee Midnighter’s “Love Special Delivery,” and The Blasters’ “Flat Top Joint.”

The set after intermission included a couple of polkas; Cesar joked, “we heard that DC is a big polka town.” They also covered “I Got Loaded,” which has been a staple for the band since they recorded it for Will The Wolf Survive, and they finished the set on another Spanish tune. For their encore, they changed things up; the last few times I saw them, they covered the Grateful Dead’s “Bertha,” and this time they went with Neil Young’s “Cinnamon Girl,” before closing with a medley of “La Bamba” and “A Little Love.”

All in all, this was a fantastic night of great songs, with a warm atmosphere and lots of joy. This is music as it should be, delivering both a message and uplift to the audience. If you haven’t had a chance to catch these guys, they’ll be back here next summer, performing with the Tedeschi Trucks Band at Wolf Trap.