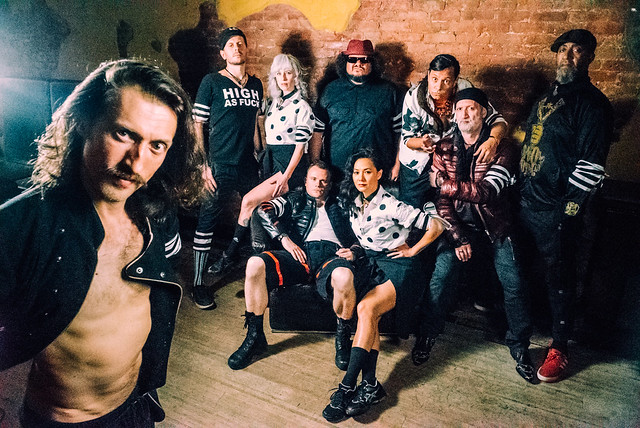 Maybe Gogol Bordello never stays in the same place for long, but you can celebrate New Years Eve with the gypsy punk revelers at Rams Head Live in Baltimore on Friday, Dec. 31!

Bandleader Eugene Hütz started to hear the songs of Seekers and Finders, his collective’s seventh studio album, as he shuttled back and forth between three continents, and the nine-piece ensemble developed and refined them on the road. From its inception, Gogol Bordello has been a band of immigrants, with members hailing from Ukraine, Ecuador, Russia, and Ethiopia. They tour relentlessly. Travel is in their blood.

Yet for all the long hours and far-flung adventures that birthed it, Gogol Bordello’s most recent record advocates loudly for living life in a specific time and place: right now — and in the real world.

“People think you explore the world with the latest phone in your hand,” said Eugene. That’s the antithesis of living for Gogol Bordello. None of these songs sprang forth from an interesting news story or an extended studio improvisation. “My focus is always on staying experiential. Go for first-hand information, transmute it into wisdom, and share it with the people in a communal celebration.”

Watch the official music video for “Seekers and Finders” by Gogol Bordello and Regina Spektor on YouTube:

Gogol Bordello formed in New York in 1999, injecting Eastern European musical influences into underground rock to forge their distinctive “gypsy punk” sound. In keeping with the band’s roots, the title track “Seekers and Finders” pairs Hütz with another genre-bending NYC artist who started her career at the turn of the 21st century: Russian-born singer-songwriter – and longtime friend – Regina Spektor. “It’s the duet of the wandering Jew and the roaming gypsy by the campfire, which we represent most perfectly.”

Seekers and Finders also marks another return, as Hütz resumes production duties after entrusting them to outside producers including Rick Rubin (Transcontinental Hustle, 2010) and Andrew Scheps (Pura Vida Conspiracy, 2013). Eugene added, “Our path has blessed us with those grandmasters, but I’ve always had a strong DIY ethic and knew eventually I wanted to get behind the wheel myself! It was like being a matador facing the beast of Gogol’s collective creativity.”

Countdown to 2022 with a Balloon drop and champagne toast at midnight!