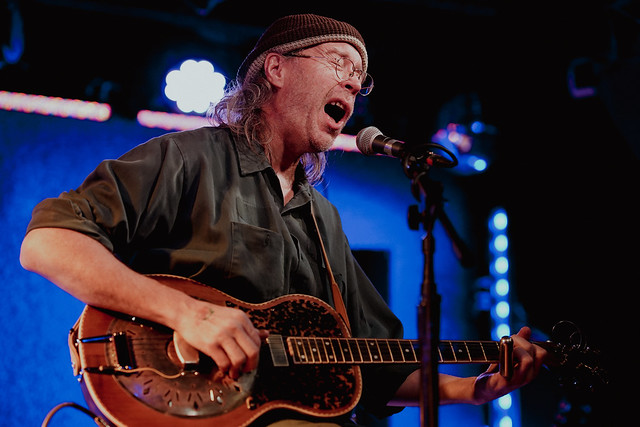 Redefining a career through a nationwide lockdown and its confusing wake hasn’t necessarily been a breeze for most musicians. But if any had experienced what one particular virtuoso guitarist from Minnesota went through in the years leading up to the pandemic, it would have likely given them strength to persevere the tougher-than-usual environs of 2020 and 2021.

An acclaimed Piedmont blues and folk blues master who grew up in a small city called Austin and never moved out of the Land of 10,000 Lakes, Charlie Parr took the stage at DC9 recently as a remarkable story of perseverance and unwavering commitment to one’s craft.

Parr had overcome numerous daunting hurdles to put himself in a favorable position with a rising trajectory in late 2019 leading up to what would be the shutdown of the nation’s music venues.

Charlie’d already surmounted the demobilizing effects of a neurological condition named focal dystonia — one that has shown a tendency to affect the hands of musicians and some athletes too. Around 2009, he had to essentially reteach himself to play the guitar with the use of only some of the fingers on his right hand — not such a simple task for a man who’d made a name for himself with a fingerstyle that he could no longer pull off. But he developed a new approach using the digits he could move properly and without pain, and he managed to put out almost 10 albums over the next decade, recreating himself in the process.

But in 2018, Charlie suffered unthinkably nasty injuries in a disastrous skateboarding accident, leaving him with a shattered shoulder and forcing him to play the guitar lap-style for a period of time.

Yet he battled through to return to where he was prior to the accident, essentially redefining himself again with patience and hard work, literally fighting through pain to getting back on stage. When he set out on the road in the fall of 2019 to tour alongside his friends and Wisconsin indie folk rock outfit Dead Horses, he was promoting his eponymous release and he was additionally working on the ambient/drone collaboration known as portal iii with bassist Liz Draper and drummer Chris Gray.

That experimental endeavor was released in April, a month into the widespread hiatus of in-person live performances. So, unimaginable could have been the early pandemic consternation for someone like Charlie, who before taking a shot at music full-time worked in homeless outreach and whose story — up to that point — was explored in the 2013 documentary Meeting Charlie Parr.

But with a smile on his face, his love for guitar shining through, Parr hit the ground running this fall to get himself back in front of fans and to promote his first ever Smithsonian Folkways Recordings release, Last of the Better Days Ahead.

Despite entering what he’s described as a deeply reflective time in his life, as the dour title might suggest, Charlie was bright-eyed and jovial on the cozy second-floor space of DC9 on Dec. 11. Fans spoke to him before the music started, and he graciously engaged every one of them who approached them, proudly — and carefully — displaying his Mavis Mule Tricone resophonic on the merch table next to the new album, the textures of which the hand-made guitar helped create.

Seated on a stool, clean faced following the recent disappearance of his illustrious beard, and looking into the dark, packed venue, Charlie began his return to the capital with “Everyday Opus,” the first single from his new record. It was a meditative rove that seemed to explore desolation and aimlessness in the form of a meandering, nomadic composition displaying not only the precision in his hard-working hands, but his allurement as a natural and authentic storyteller with unmistakable character and delivery.

Thought-provoking, even if cross, the track speaks to Parr’s ability to make profound observations about the world around him and convey that with style and a timeless sound: “Sometime on a weekend I think I’ll visit a friend / And remember all our old times and see how they have been / But it feels like a lot of effort to explain myself again / So I’ll just wait and see if they’ll visit me instead.”

“817 Oakland Avenue,” ringing out like a Parr classic on first listen, saw Charlie in his element, finding stride with rapid picking, his head titling back and his eyes fluttering upward. The imparting words here, as he’s said publicly, are rooted in his gratitude for his family and friends, especially these days.

This glistening, reassuring prance featured Parr’s right hand flashing with speed — he uses his thumb to carry a rhythm and joins it with his lightning quick index finger to create the melody. Making understandable words echo with poeticism and with his voice’s trademark shiver, Charlie emanated the rich tone his fans had clearly come to absorb:

After playing the title track off his most recent album, Charlie took a breath and a moment to wish everyone a happy holiday season.

“It’s almost the time of year that my mother will relay to me the story of me destroying her nativity scene when I was a kid,” he was perplexed. He recalled using a batch of small plastic army men, larger GI Joe dolls and the Gene Simmons character from a series of KISS figurines to stage an “uprising” on his mother’s holiday decorations, a saga that he said ended when her slipper came crushing down on the battlefield.

“And the victory went to her. … Why this is something she remembers to bring up 48 years later — ‘remember the time you destroyed my nativity scene?’ She uses profanity. ‘You’re going to hell,’ she says.”

Long charmed was the crowd as Charlie delivered other memorable takes on cuts from his newest album, certainly to the pleasure of the Smithsonian Folkways representative who’d come to take in the show.

Watch the official music video for the title track from Charlie Parr’s newest album, “Last of the Better Days Ahead,” via the Smithsonian Folkways official YouTube channel.

Parr paid tribute to one of his heroes in performing a spirited, howling take on the new “On Listening to Robert Johnson,” a chance for him to wield the silver German slide on his left pinkie and extract a breadth of timbre from his unconventional resonator.

Though it was a short set — a double-bill shared with Dead Horses, the on-the-rise act he’d last toured with — Parr rewarded the audience by playing mostly songs written in these modern pandemic times, a promise that Charlie — despite the downtrodden hints of his new album — has plenty of music to left to discover and shape through his sentiment and ingenuity.

With a vigorous version of “Walking Back from Willmar,” Charlie defied logic with his ability to yank or bang robust, rare blues sounds out of the strings, his foot tapping as he went, his enrapturing pitch sending the listener to a different time and place — when and where is a matter of personal preference, but the freighting quality is no doubt what helps make his music and his personality so enduring.

Charlie appeared to be just getting warmed up as he moved from a poignant, introspective “Blues for Whitefish Lake, 1975” right into “Anaconda,” letting himself loose lyrically and instrumentally. This free-wheeling boogie grooved and rotated as Charlie again threw his head back and roused a chorus that could only come from his imagination:

“This world looks like it’s built for just one kind / And everybody else is gonna have to sit at the side / Where they’ll never ever be allowed to drive / But that’s all a lie, so they can keep all the pie, all the time.”

In characteristic Charlie fashion, his last conversational offering of the evening was commentary on “Anaconda’s” origins — it’s a town in Montana that happens to be home to the world’s tallest surviving masonry structure, the brick Anaconda Smelter Stack.

“If you’ve never been there … you can see it from the interstate,” he was dry as could be, to humorous effect. “There’s no reason to get any closer.”

Charlie’s been hesitant in interviews to express any pride in himself, shifting the focus to the guitar as his soul mission, a life-long love. Even if he strives to be humble about his off-stage achievements, his life and the scars that have come with it grant more prowess and wisdom to a widely respected, self-made, calculated songwriter and an inspiring, innovative multi-instrumentalist.

Setlist
Everyday Opus
1871 Oakland Avenue
Last of the Better Days Ahead
On Stealing A Sailboat
On Listening to Robert Johnson
Rain
Walking Back From Willmar
Blues for Whitefish Lake, 1975
Anaconda
1922 Blues

Here are images of Charlie Parr performing at DC9 on Dec. 11, 2021. All photos copyright and courtesy of Casey Vock. 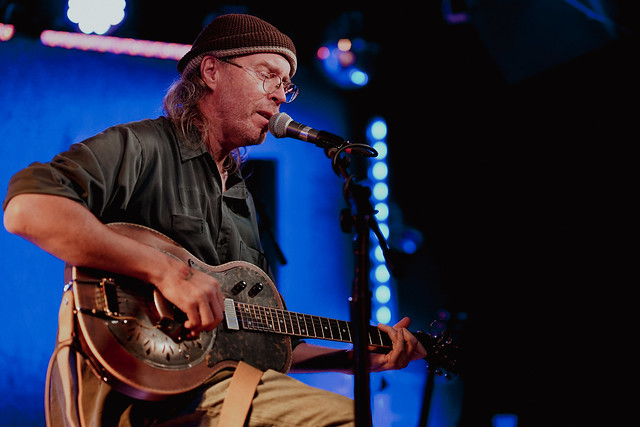 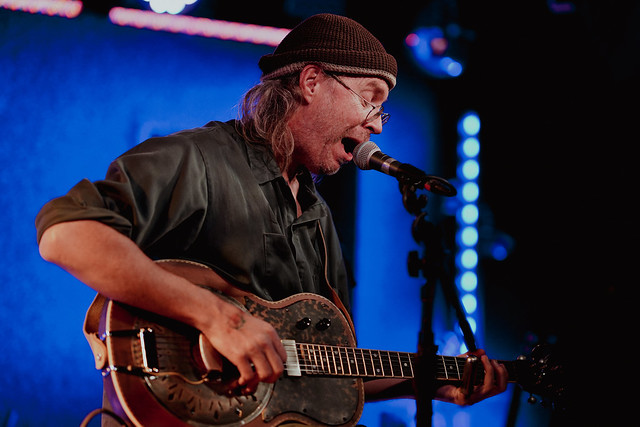 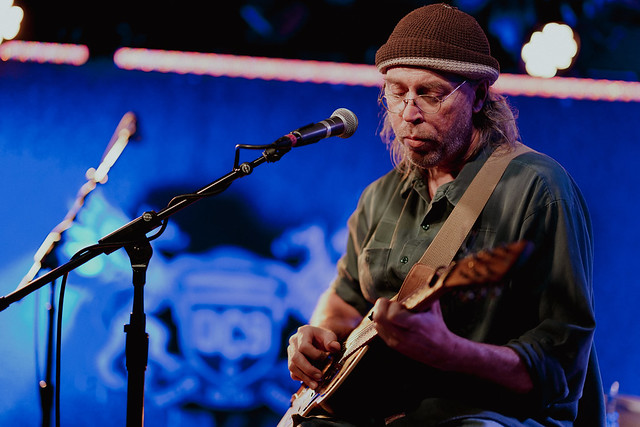 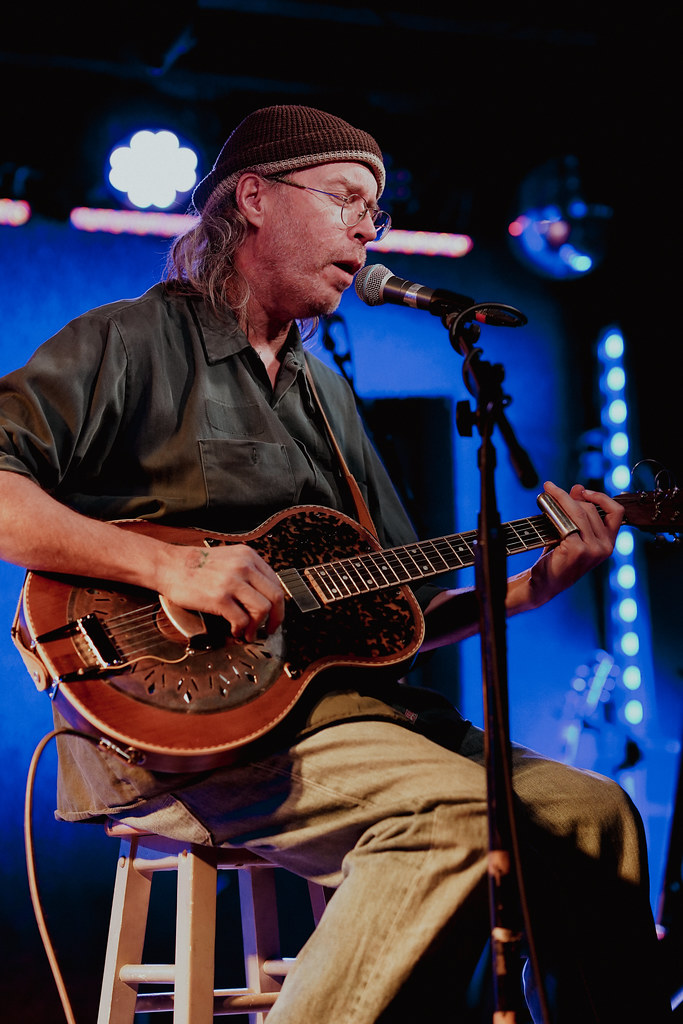 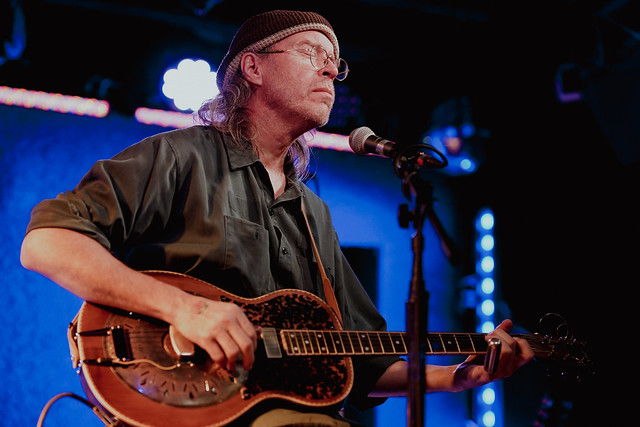 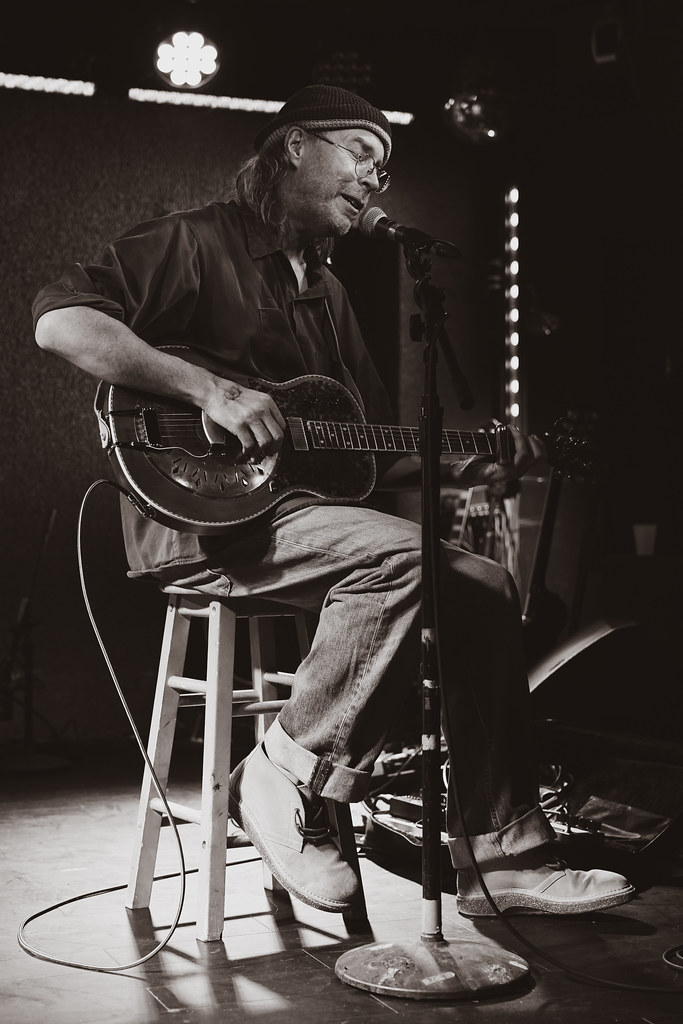 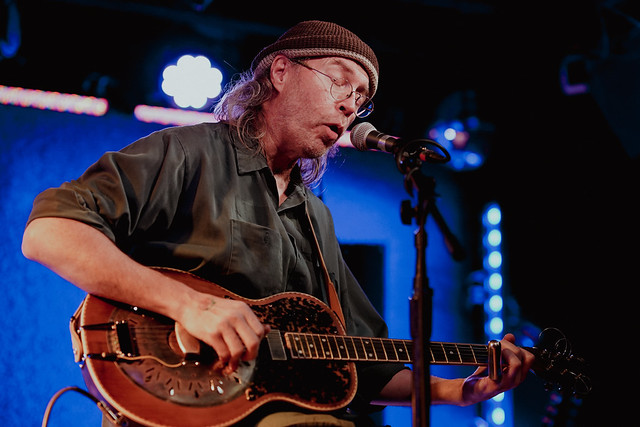 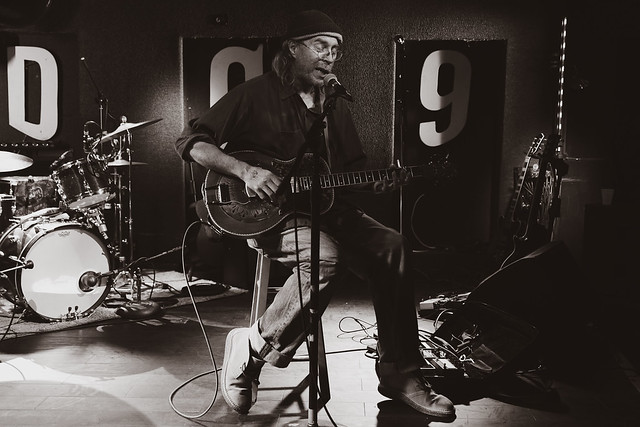 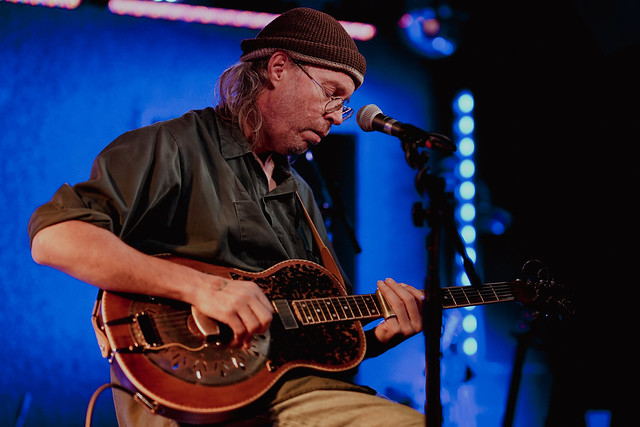 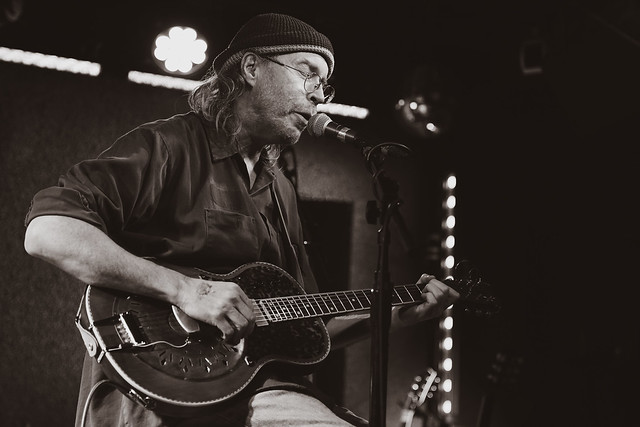 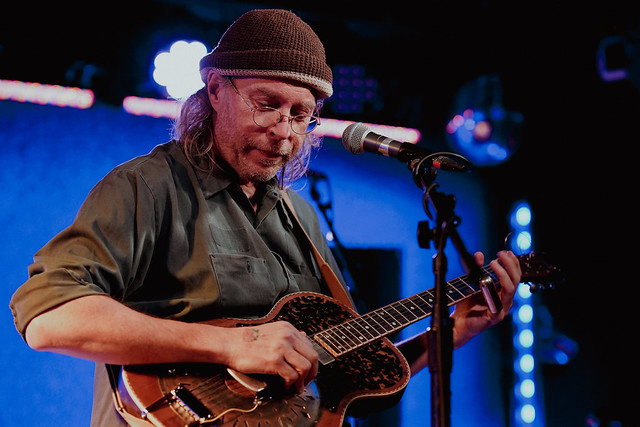 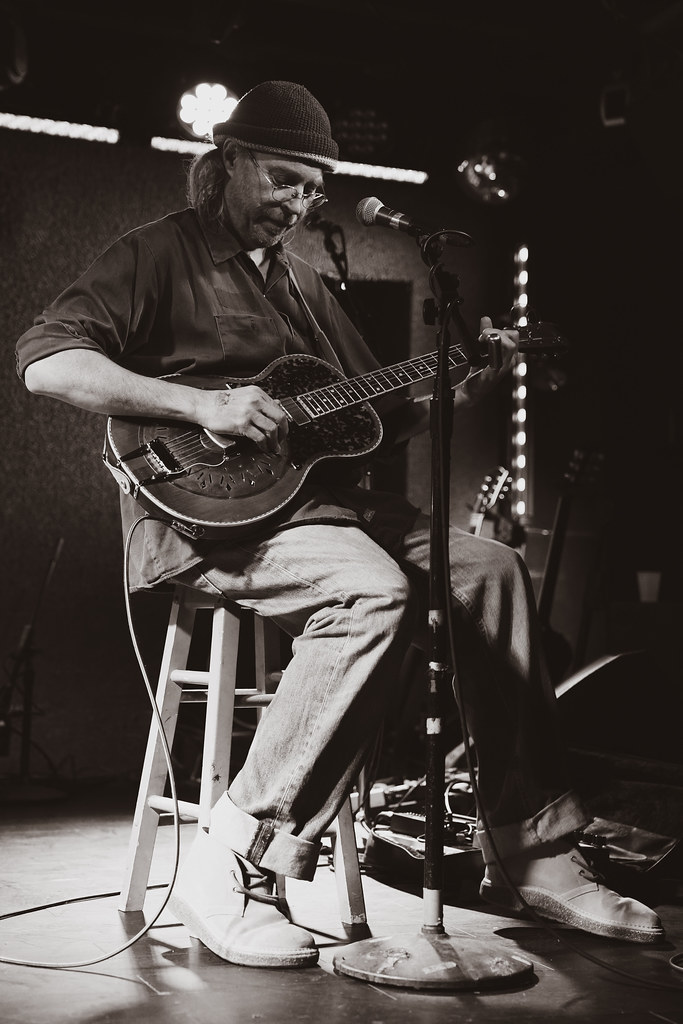 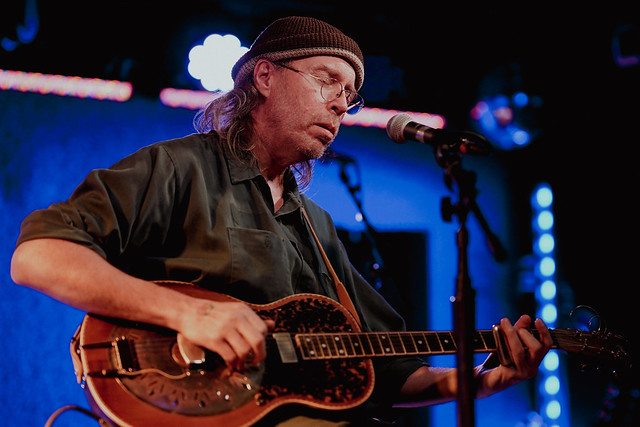 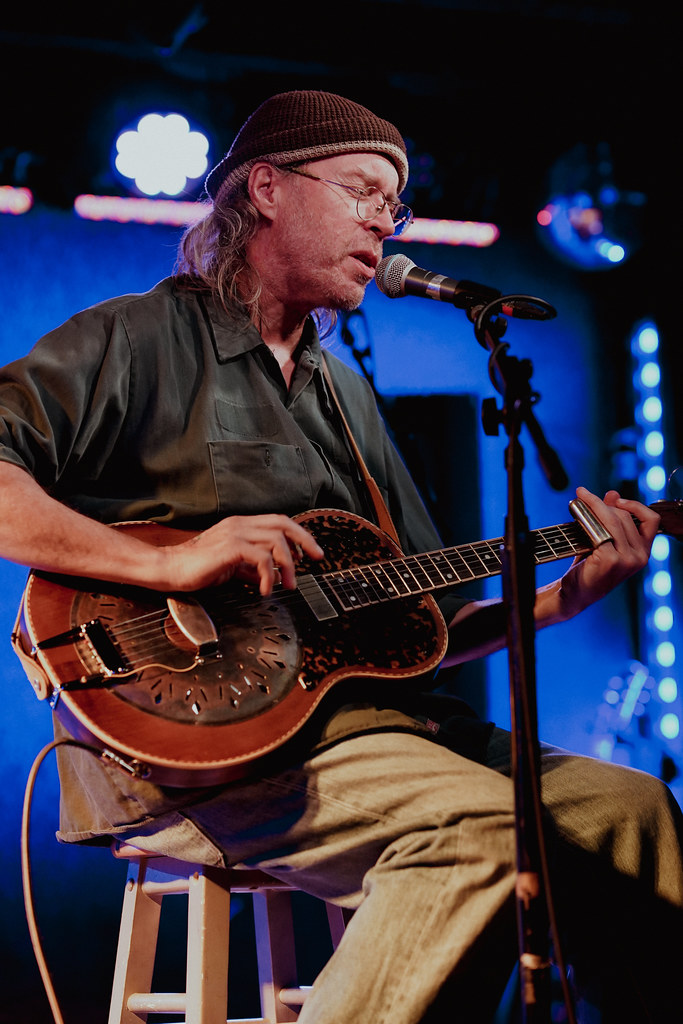 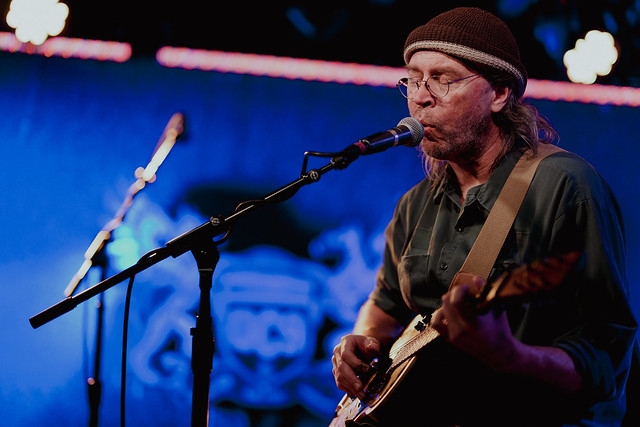 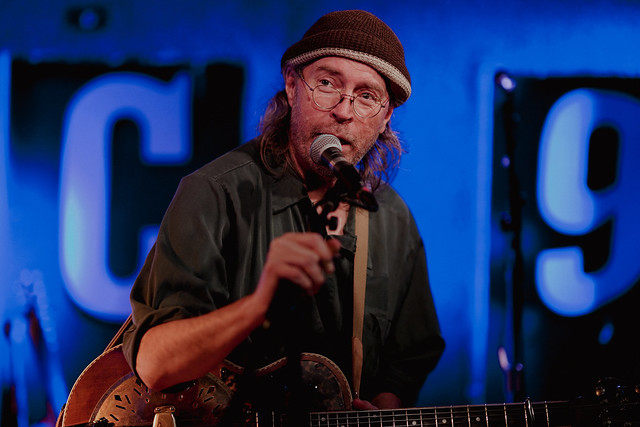 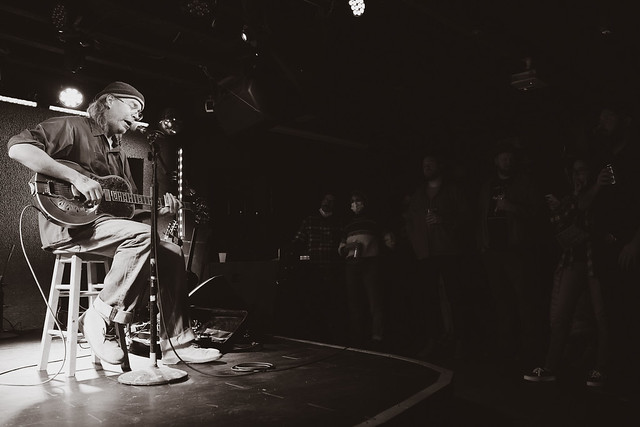